James Cameron made some comments last year concerning Wonder Woman where he called the movie a “step backward” because of how beautiful Diana was, comparing Diana to Sarah Conner saying “[Sarah] was strong, she was troubled, she was a terrible mother, and she earned the respect of the audience through pure grit.” This idea, that women have to be troubled, broken and have “pure grit” to rebuild themselves is at the core of Red Sparrow.

Red Sparrow is about Dominika Egorova, a prima ballerina who is injured during a performance. No longer being useful to the state and with her mother suffering from chronic illness, she turns to her powerful uncle for help. After Dominika witnesses an assassination take place while being raped, her uncle suggests she enlists as a Sparrow in order to preserve her life. A seductive spy who will give her body for the state. A sexy patriot if you will.

Her mission is to get close to Joel Edgerton’s CIA agent character Nate Nash (pour one out for that creativity) and figure out who is the mole inside of the Russian government giving information to the U.S. Which, of course, means, sexy bathing suits and a “romance.”

Jennifer Lawrence talked about about how Red Sparrow is an “empowering” movie for women, as well as how filming nude scenes for the movie was part of her reclaiming her body from the leak of nude photos she experienced back in 2015. I am glad that was Lawrence’s experience. I can say that while she may have felt empowered and there is definitely an illusion of victory at the end of the movie, everything leading up to that moment does not feel earned from the torment we have had to watch this woman experience.

None of it is any more appealing to watch when it happens to male characters in a half-hearted attempt at equality. While we do get a flash of a penis in this movie, it does not equal the same nudity and sexual brutality we are forced to see Jennifer Lawrence’s Dominika go through.

Before she even enters Sparrow School, we see Dominika be inappropriately touched by a powerful man and have to swallow that discomfort. The rape scene she is forced into is painful to watch and while that is the point, there is no point where any man is sexually threatened in that way.

In Sparrow School or as it is referred to later as “whore school” depicts itself a place where both men and women are expected to give their bodies up for the state. However, other than one male character flashing his Stalingrad it’s two women who we are seen to be sexually brutalized.

Dominika is almost raped and when she defends herself she is reprimanded, but then gets an opportunity to shame her would-be-rapist but taking the power away, it is still Lawrence, naked and legs spread apart while her attempted rapist remains clothed sadly trying to get erect. And the thing is, I understand the intent behind this scene, look how powerful she is because even though she’s naked, she’s really exposing him.

Except, that’s crap when the only people we see getting sexually violated or being traumatized by that sexual violence are women. This is a male idea of female empowerment. The White Princess did something similar, but in that scene, which was written and directed by women, the female character was clothed. The scene in The White Princess focused on the heroine’s pain and not the discomfort of the man who was raping her.

Are we expected to believe that male sparrows don’t feel any violation of their sexual autonomy and it’s just the women who end up traumatized like Marta, Dominika’s sparrow roommate? All of this is compounded by the fact that Dominika is only doing any of this to take care of her mother and because her only options are to be a Sparrow or die. This is not her choice.

In their review of the movie, Pajiba author Kristy Puchko pretty much sums up my major grief with the film in this paragraph.

Red Sparrow takes its “strong female character” and repeatedly ogles her, strips her (of her clothes and power), sexually assaults her, beats her, then ogles her some more. Red Sparrow offers lip-service to feminism by having a woman fight against the patriarchal institutions that have made her a “whore” for the government. But really, this is a paper-thin excuse to leer at Lawrence whether she’s swanning around in low-cut gowns and skimpy bathing suits, or screaming naked and in terror.

All of this happens so that at the end of the movie there can be a dramatic reveal of Jennifer Lawrence being the Chessmaster and setting up her creepy uncle to take the fall so that she and Jeremy Iron’s character can be moles for the CIA. This reveal is supposed to make up for everything because now the pawn has become the queen: 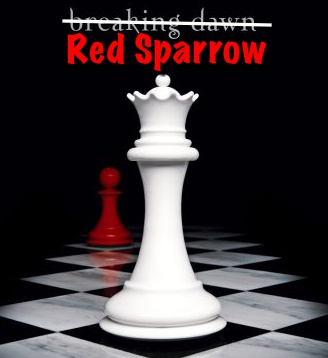 Contrary to the way my writing may come across, I was not offended by this movie, I was just tired. The most irritating thing about Red Sparrow is that it wants me to be satisfied with watching a woman be tortured and tormented for two hours, for a payoff in the end. I’m sorry, but no thank you. Female action heroines do not need to be traumatized and raped and tortured in order to be strong. Female action heroines don’t need to exist in a film where every other woman their age is either a rival or an enemy.

That may be empowering for Jennifer Lawrence, but it’s not empowering to me.