Of Course Netflix’s Red Notice Has Everyone Asking Who Would Win in a Fight Between Wonder Woman, Deadpool, and Black Adam

Next inevitable question: will there be a DC/Marvel crossover? 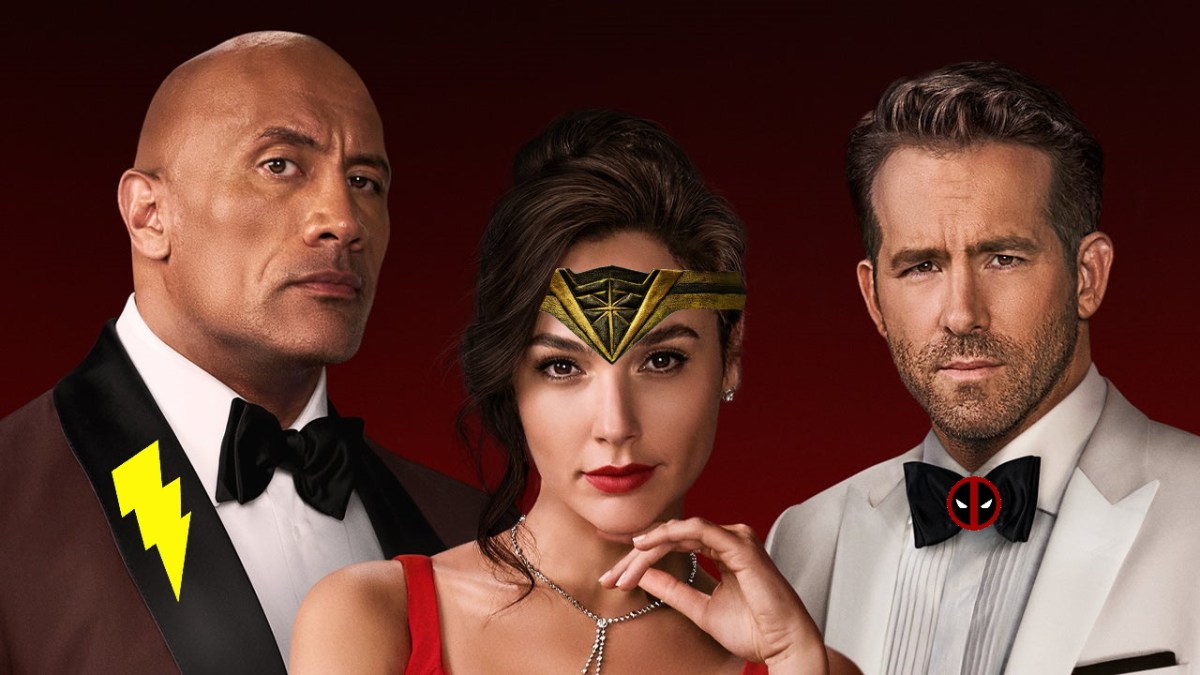 No one is surprised that Netflix’s Red Notice, an action-comedy that brings together Dwayne “The Rock” Johnson, Ryan Reynolds, and Gal Gadot, has led to questions about a colossal crossover between their DC and Marvel characters.

Red Notice has Johnson and Reynolds playing an unlikely duo where The Rock’s an FBI agent (who holds a helicopter door open for a missile, oh Dwayne, please never change) and Ryan Reynolds is Ryan Reynolds – as an art thief this time. The two are attempting to catch an elusive criminal (Gal Gadot) who is always two sultry red dress steps ahead of them.

Insert comedic hijinks. Like. At one point in the trailer, a bull charges forward and rams into The Rock (I’m sure he’s fine, the bull, however, is another story).

Since the movie has Johnson (Black Adam), Reynolds (Deadpool), and Gadot (Wonder Woman) sharing screen time, it was inevitable that the “who would win in a fight” and “crossover when?!” questions would come up. Fortunately, Johnson and Reynolds were prepared and even flirted with the idea of a crossover in the future.

“Who would win in a fight between Wonder Woman, Deadpool, and Black Adam?” Johnson actually asked the question himself when being interviewed by Access Hollywood. “Wonder Woman.”

There’s no way a crossover like that could even happen though, right? No matter how self-aware Deadpool is? Well, according to what Johnson told Variety, he thinks that he, Reynolds, and Gadot could make it happen.

.@TheRock foresees a cross over with the Marvel and DC universes: “I turned to Ryan [Reynolds] and Gal [Gadot] and I said there should be a cross over… We can be the ones to possibly make it happen. We’ll see what happens.” https://t.co/M232HP48fJ pic.twitter.com/4uiNysPb2j

Initially, the crossover question only includes Black Adam and Wonder Woman since they’re both DC characters, but Johnson decided to include Deadpool in the crossover talk because hell, why not?  “I turned to Ryan and Gal and I said there should be a crossover with Marvel and the DC Universe. We can be the ones to possibly make it happen. We’ll see what happens down the road.”

I expect to see some fanart, at least.

As for Ryan Reynolds and his thoughts on who would win in a fight between Black Adam, Deadpool, and Wonder Woman? His answer was perfection.

Ryan Reynolds answers the question on everyone’s mind: Who would win in a fight between Deadpool, Black Adam and Wonder Woman?

“Oh boy, I think the audience,” he says. “And whatever lawyer managed to figure out how to bring all those three together.” https://t.co/M232HP48fJ pic.twitter.com/FGDM75Cj0p

“Oh boy, I think the audience. The audience is gonna win in that fight. And whatever lawyer managed to figure out how to bring all those three together.”