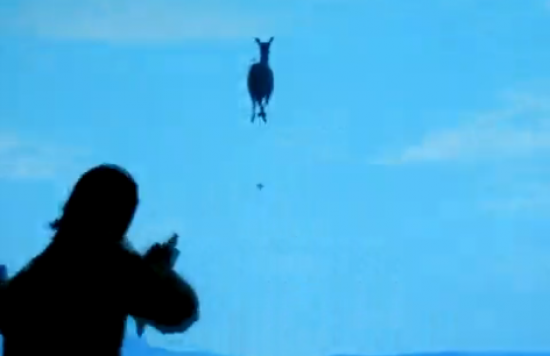 I got my copy of Red Dead Redemption this past weekend, and I’m really impressed with the game thus far: IMO, it beats the pants off Rockstar‘s drab, repetitive GTA4, and just feels tangibly different from the horde of sandbox games with guns. Also: There are some pretty crazy glitches.

My Stetson is off to YouTube user WhereDaBootz, who, through diligent playing, has discovered some of the oddest glitches to strike Red Dead Redemption, most involving freakish human-animal hybrids. Unlike the recently-patched invisibility glitch, none of these really affect game play, but they’re amusing nonetheless.

As one YouTube commenter points out, these glitches underscore one of the amazing features of the game: Beings are programmed limb-by-limb rather than as whole entities — adding to considerably greater complexity. “The animations aren’t canned. Each limb has its own movement,﻿ if you know what I mean … I don’t know if this kind of animation programming is common in games, but the animations in the game are solid.”

A rideable woman with the face of a donkey: