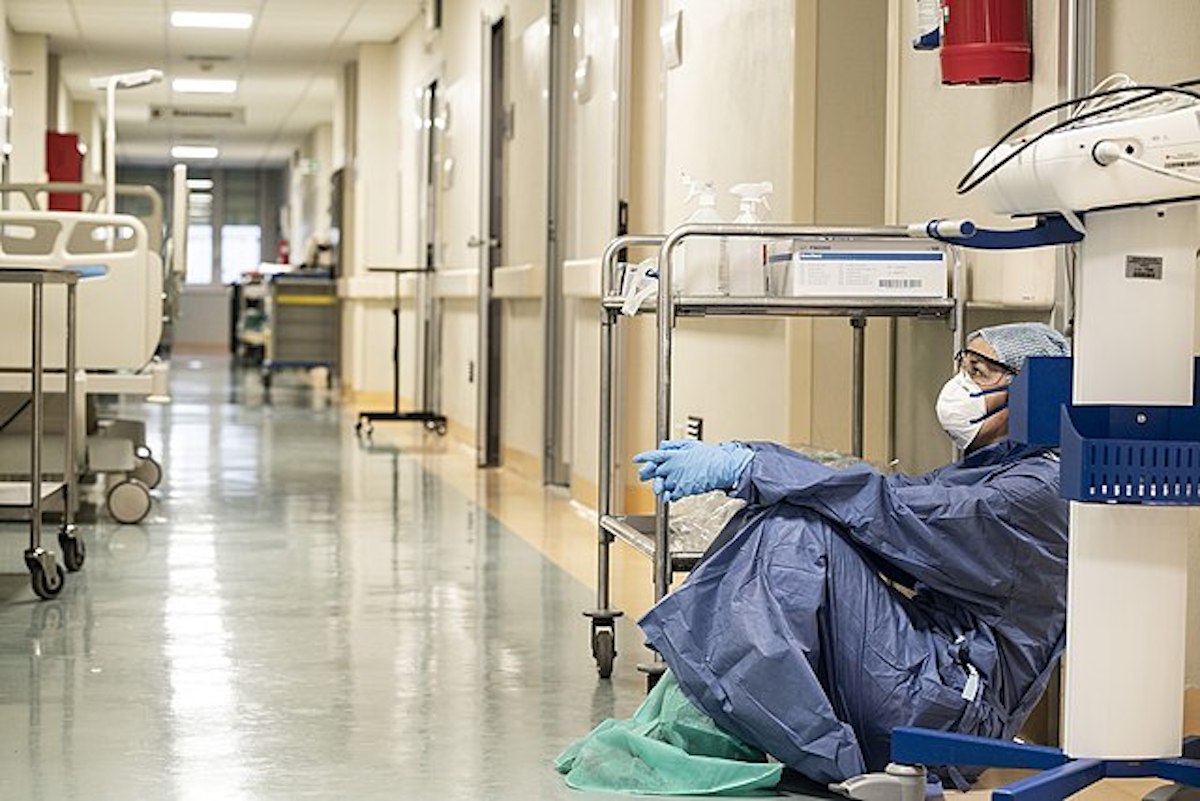 I’ve been spending a lot of time on two subreddits—r/HermanCainAward and r/COVIDAteMyFace—that collect stories of virulent anti-vaxxers and anti-maskers who then become infected with COVID-19. Most of the cases featured there end up as fatal or with the subjects on long-term intubation, which means that they are all but guaranteed never to recover.

Even the small proportion of people who survive intubation often die in rehab from cardiac failure or blood clots, and those who make it through can face a lifetime of health problems coping with their ravaged bodies. Below, I share a thread from an ICU doctor that lays out the appalling stages of a COVID death with clear-eyed efficiency. It’s something many of us have not encountered head-on; we’ve heard how awful COVID can be even for people with relatively mild cases, but the full, terrible extent of its fatal course? You have to go searching for that information.

First, as an experiment, try this, to experience how it feels trying to breathe in a later stage.

Ok, now take a deep breath, all the way. Trust me. Just do it. Now hold it. That’s your new starting point. I want you to take your next breath from there. And your next. Don’t cheat. Pretty anxiety provoking, right?

I wrote about the mixed horror, schadenfreude, and sadness when you read social media posts from people who spent more than a year posting vicious misinformation memes who then go on to suffer from the virus that they mocked. But what has become clear the more time I spend on these forums is that most of the general public still has no idea how brutal and absolutely devastating a COVID-19 death is for both the person and their loved ones. It can take up to six weeks, incur catastrophic medical costs, and cause incalculable suffering.

I don’t mean emotionally, though of course the scars and ramifications from these losses will last a lifetime for survivors. No, we have been shielded to a fault from the realities of what it really means to die from COVID-19. It wasn’t until I pored over hundreds of Facebook updates from agonized family members, tracking the downward spiral of their loved ones in packed ICUs, that I came to understand myself.

From feeling like you’re slowly drowning for days on end to the catheters, rectal tubes, dialysis, and fluid-swollen bodies that can come with intubation and later stages, we should all be experts on what it means to develop the most severe COVID complications.

Most of us remain far from experts.

Many commenters in the subreddits say the same: that they had no concept of just how terrifying a death COVID wrought until they started reading those testimonies. The physical process itself is one of the worst ways to die that I could possibly imagine, and it is being repeated thousands of times a day here and around the world. The fact that we still know so little about this—more than nineteen months into the pandemic, and with 700,000 Americans lost—unless we actively go looking for that information is unconscionable. There has been some written news coverage of the “body shutting down due to COVID” process, but it shouldn’t be up to a self-selecting bunch to seek it out.

More and more, I believe that this is a major failure of not just the American media but globally. We have embedded war photographers, whose frank and graphic photos have sometimes worked to change a public’s perception in wartime. Pictures of what really happens behind hospitals’ closed doors in overflowing COVID-19 wards, however, are scant. Of course there is the privacy violation element. Yet I see no reason why identities cannot be obscured among the consenting and we can’t witness this process documented in real-time for the greater public good. Even a reenactment would be illuminating, though the sheer amount of invasive tubes inserted into people’s bodies would be difficult to duplicate onscreen without a House, M.D.-level special effects crew.

I imagine there would be several patients who would consent to have their story shown—those who received the vaccine or are pro-science but suffering anyway because of preexisting conditions and being exposed to anti-vaxxers. There have also been several deathbed conversions from people who realize too late the bill of lies they were sold by right-wing media and politicians downplaying the pandemic and targeting preventative measures. They often urge others to get vaccinated so as not to end up in such dire straits.

Articles telling their stories get lost too soon in the 24-hour news cycle churn. Sometimes coverage lingers a little longer—say, when both parents tragically die of COVID complications that could have been prevented by a shot, leaving behind a family of orphans—but they are forgotten soon enough in the next click, the next status update. We need concerted focus on how agonizing it is to die from COVID-19 to act as a deterrent for those who still feel “vaccine-hesitant.” We should be saturating coverage with uncensored reality and stop mincing words for fear of offending people.

Here is a stage-by-stage overview of what happens written by Canadian intensive care physician and nephrologist Dr. Darren Markland.

So, we’ve reached 34 deaths per day from COVID. It’s a shocking number that really gets swamped over by all the other numbers. I’m going to describe the usual dying process in the ICU from this disease. I’m wearing my clinical hat, be warned.

They treat potential coinfections, mange noncovid aspects of patient health and importantly try to turn the course of the disease with steroids and monoclonal antibody therapy. If the trajectory is set, they come to the unit to be placed on a ventilator.

That is why none of the antiviral therapies work in the ICU. We are battling uncontrolled inflammation. You know when you bang your arm and it hurts way more the next day? Like that, but because COVID targets blood vessels it’s like banging every part of your body.

It’s what we like to call the, “do no harm phase.” This is where we try to find the balance of getting enough air in the patient so they don’t suffocate while trying not to tear up their stiff lungs and start the inflammation up again. If this were a joint you wouldn’t move it.

In the non ECMO pathway, we take it day by day. Our job is to protect the vulnerable patient from other things. Blood clots, bacterial infections, skin break down, kidney failure, malnutrition while we wait for the lungs to heal. It can take weeks.

To keep people with this lung disease (it’s call ARDS) from ripping their lungs apart we need to sedate them very heavily. Sometimes even paralyze them. It can make people incredibly weak, but there are no other options.

At that point we can start to wake our patients up. There emergence is often dramatic, like coming up from deep water. We need to be gentle. Too much struggling and we can lose all of our gains.

There is however a subset. They seem to improve initially, but despite everything we do they deteriorate after a week on the ventilator. No matter what we do their lungs get stiffer and stiffer. Instead of healing, their lungs are replaced be scar tissue.

Deprived of blood the kidneys fail first. Dialysis will keep them going forward a while longer, but without lung transplantation the heart eventually stops. Often we sit down with families before these final things happen to let them know the path their loved ones are on.

The journey of dying in the ICU from #COVID19 takes on average about a 6 weeks. I have seen what that does to families.

Despite our resources and technology we can do little but support our patients and their families through the process waiting for them to heal.

And though most who read this thread know that vaccination can prevent almost all of this, it is why those of us in healthcare struggle knowing this is now preventable. It’s a thought that torments us through every day of those 6 weeks.

Even in his honesty, Markland is giving his account a sort of clinical distance to spare the gristliest details. I have read many other graphic first-person reports from healthcare workers describing situations I will never be able to unsee in my mind’s eye. And the exhaustion and trauma experienced by these people on the frontlines, who must battle the virus’ destruction and also contend with active misinformation and hostile patients, will wreak havoc on their lives and professions for years to come.

Here are some further testimonies collected in a post on r/nursing on reddit, including some cases that are so disgusting I cannot even record them here. Oh, and if you’re curious about additional professions that are being made to handle another element of this pandemic’s outcome, you can check out this fascinating (and upsetting) thread from a funeral director on what it’s like to be a “last responder” in an overwhelmed funeral home.

Maybe sharing some of the information you’ve read here with the “vaccine-skeptical” could help to convince that, even at its best, COVID is not “a bad cold,” and that even mild cases can leave lingering damage. The worst cases are catastrophic. Those much-touted “survival rates” rarely account for the fact that even the seemingly small percentage of people who don’t survive encompasses millions. Rolling the dice to hope you’re not amongst those millions is a losing game.

It’s possible you are among those who are already aware of the worst specifics of a COVID-19 decline. You may have had to witness it yourself or heard first-hand accounts. If so, I’m sorry if you’ve felt like you’ve had to shoulder this knowledge in a sometimes uncaring and indifferent environment. Together, we have to change this reality and make it more real for others. It’s hard to see how anything will change otherwise.