Something’s Missing in the Red Dead Redemption 2 Trailer. By the Way, Have You Heard of These Cool Women Outlaws?

Apropos of nothing whatsoever, here’s a link to ten women outlaws of the Old West that you may not have heard about. Additionally, here’s another seven from the fine folks over at Bustle. Oh, and a great list of some women pioneers. Or a list of six legendary “Wild Women of the Wild West.” Or how about another big ol’ list of legendary women who lived in the Old West? A few of them overlap, but hey, that’s just because there are a lot of great stories about them that definitely should be told, don’t you think?

Tangential opening aside, here’s the buried lede: earlier this week, we were excited that we received confirmation about a Red Dead Redemption sequel titled Red Dead Redemption 2. Along with that confirmation was a promise of a trailer that would come a bit later. Well, that time’s come, and the trailer’s officially landed. It’s only about a minute long and doesn’t really deliver too many details or anything like that, perhaps making it more of a teaser than a trailer. But that being said, I’ll echo my words from the other post regarding this sequel: here’s hoping for the best.

Real quick, though, have you heard of Belle Starr? She was an outlaw that lived around the same time. She was born Myra Maybelle Shirley Reed Starr, and to be honest, I don’t blame her for wanting to shorten her name. Her full name probably wouldn’t have fit on a wanted poster. She got hooked into the outlaw life when she was young and lived life on the lam with her husband, Jim Reed. Theirs is kind of a classic Bonnie and Clyde story. The circumstances of her death are mysterious, which definitely makes me interested in exploring some hypotheticals, I’ll tell you what.

Anyway, the bits present in the trailer, which I’m guessing are taken from in-game, look stunning. The environments are absolutely gorgeous, and the sheer diversity in landscapes makes the game feel absolutely promising in terms of the possible adventures to come. This trailer felt a bit like a tech demo too, as all sorts of effects were present and, again, it served its purpose well in that regard.

Once again, seven figures take up the latter parts of the trailer, each of them masked and riding off into the wilderness. It’s a bit reminiscent of Magnificent Seven, to be honest, and if the game has even a sidequest inspired by the Seven Samurai, then you know I’m on board.

Oh! Speaking of great shooters, check out Lillian Smith, too. She’s great. She was a bit of a rival to Annie Oakley, and a not-so-bad shooter herself. She’s a woman after my own heart, as she’s been described as being “notorious for bragging about her superior skills, wearing flashy clothes, and cursing like a sailor.” When it came time for her to face off against Oakley in a competition, however, she dropped the ball and Oakley outclassed her, relegating Smith to a footnote in history.

Aside from the masked figures in the trailer, there are plenty of other bystanders, most of whom pop up in the quick shot of whatever town this trailer ends up passing through. They look… bored, to be completely honest. It’s intriguing that they’re being shown as such, so you know my curiosity’s piqued. 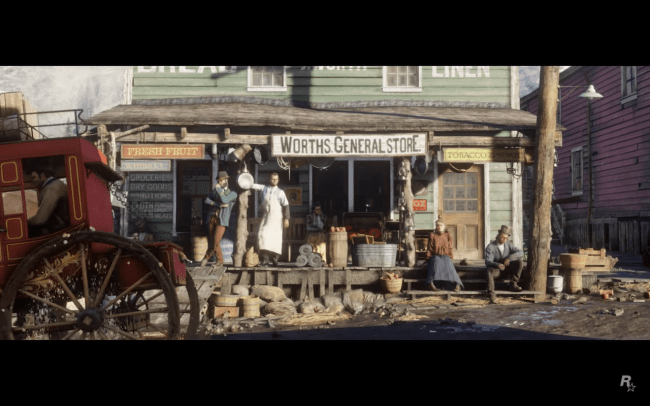 If I had to make a guess at the storyline, and going by many other folks’ guesses as to who was featured on the confirmation art, then it seems that this may be something of a prequel to Red Dead Redemption. John Marston, the main character of the first video game, used to be an outlaw and ran with a couple of characters in a gang, most of whom appear on the confirmation art (once again, according to some fairly educated guesses). It could be that this game shows Marston’s rise with his gang, and the actions that prompted the events of Red Dead Redemption.

That reminds me, have you heard of Laura Bullion? She was an outlaw, too, with a pretty rad outlaw name: “Rose of the Wild Bunch.” As her nickname implied, she ran with the legendary Butch Cassidy and his Wild Bunch gang. Eventually, however, she was apprehended and spent time in prison, after which she gave up the outlaw life and became a seamstress. Not many people get to escape the outlaw life, as demonstrated with Marston’s story in Red Dead Redemption. Lucky her.

Of course, this is all speculation (like literally anything else said about the game at this point and all points prior), and (once again echoing what I’ve written before) I realize that yes, this is just a trailer, and even it didn’t reveal too much, and yes, even a trailer isn’t necessarily indicative of what makes it into the final game. The characters present could be literally anybody or anything, and as such, I (once again) reserve full judgement on the game.

My hopeful optimism from the last post I wrote about this continues in spite of… well… in spite of things, let’s say. Rockstar’s got a really great shot at highlighting some super interesting, super original, previously untold stories of the Old West. It’d be a real shame to just completely pass up uncharted content and so many original stories just ripe for the telling.

Anyway, let’s ride off into the sunset with my favorite image from the trailer, shall we? 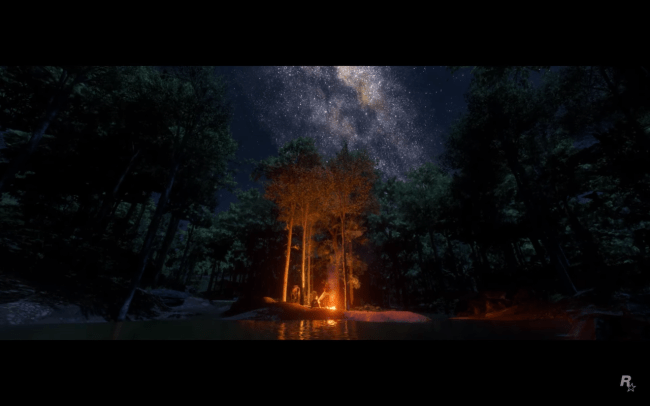