Celebrate With Your Favorite Dave – Rat Queens Is Being Made Into A Cartoon! 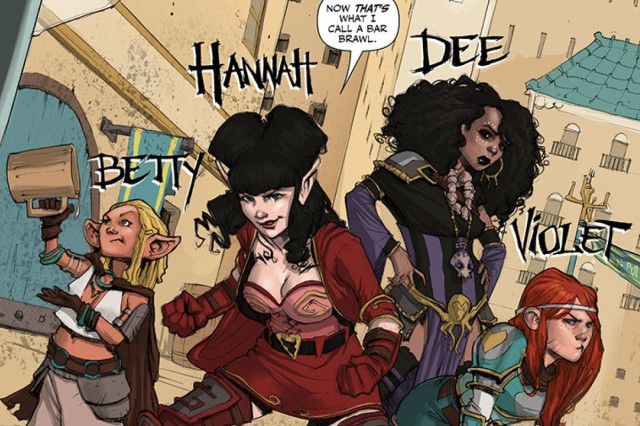 Orc Dave’s bluebirds must be getting really excited, because Image Comics’ Rat Queens is being developed for television! Written by awesome Canadian Kurtis J. Weibe and drawn by Roc Upchurch, the tale of “sass and sorcery” is being brought to the small screen by Weta Workshop‘s Pukeko Pictures and Heavy Metal.

The hilarious, Eisner-nominated series (which happens to feature four of the best-written women in comics) will be developed into a 30-minute pilot, which Pukeko and Heavy Metal will then pitch to TV networks.

“Rat Queens is a standout in the marketplace as a diving rod for fangirls, a market as yet untouched by most comics publishers,” said executive producer Jeff Krelitz. “It is not only perfect for the TV space, but much needed.”

If you’ve never heard of Rat Queens – run, don’t walk to your nearest comic book store and pick up the first trade. The Rat Queens are four foul-mouthed, tough-as-nails adventurer ladies who could kick your butt. First, we’ve got group leader Hannah, a rockabilly Elven mage with amazing tattoo half-sleeves and a talent for necromancy. Then there’s Violet, the dwarven ginger warrior who shaves her beard because she wants to and not because it’s fashionable. Dee is a human cleric of color who’s escaped from a Cthulhu-worhipping cult, and Betty is the blonde hippyhalfling thief bartender who really, really loves getting high. The four girls find themselves caught up in some classic Medieval fantasy adventures – but their responses are anything but typical.

They’re basically you and your besties, if you found yourselves in Skyrim.

I lost count of the number of times I laughed out loud while reading the comic, and if the cartoon maintains that same level of radness, this looks to be a good show indeed.