After Months on the Ground, the F-22s Are Back in the Air 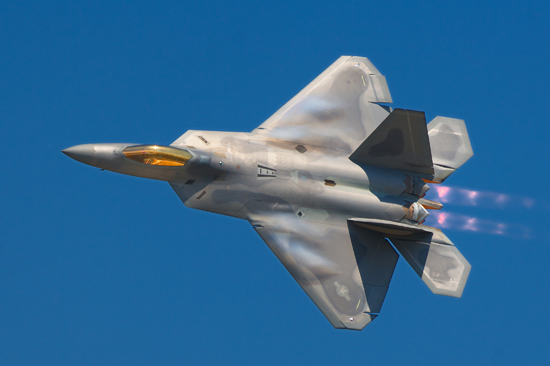 After spending the better part of four months on the ground, Lockheed-Martin’s F-22 Raptor superjets have been cleared to fly again as of today. Originally grounded in May after reports of oxygen issues, the jets have been the focus of a months long study by the Air Force and aeronautics experts. Frequent readers may have noticed that this is a story we’ve been following for some time now.

The concern sprung from pilots returning from flights with hypoxia-like symptoms, a condition which occurs when the brain is deprived of oxygen. The condition, while temporary, is extremely dangerous as it can potentially affect decision making and reaction time — two things the pilot of an extremely fast and extremely expensive aircraft cannot afford to loose. Further studies found antifreeze in the blood of Raptor pilots, which only deepened the mystery of what was going on with the aircraft.

The order from Air Combat Command allows raptors to fly once again, without restriction to their flight ceiling. Though the announcement makes no mention of any specific changes to the aircraft, it does say that all Raptors will undergo an extensive inspection before returning to the air. Pilots will be flying with additional “protective equipment,” which likely means additional or alternate emergency oxygen supplies. As well as their planes, the pilots will also be the subjects of ongoing observation to ensure that they are suffering no ill-effects.

Initial concerns about the aircraft were centered around the aircraft’s oxygen system (called the OBOGS), but this was expanded into a larger investigation of the craft’s life support systems. In the course of the investigation, concerns were also raised over the practice of starting the Raptor’s engines while the jets were still in their hangars which could have exposed Raptor pilots to harmful chemicals. A fatal crash last year in Alaska has also been connected to oxygen issues with the Raptor, though it is still under investigation.

The end of the ban is surely a welcome relief to pilots, who have only had access to simulators since the ban went into effect. Moreover, it’s the end to an embarrassing period in the life of an already controversial aircraft.

The full text of the Air Force’s announcement follows below.

The commander of Air Combat Command directed a stand-down of the fleet May 3 as a safety precaution, following 12 separate reported incidents where pilots experienced hypoxia-like symptoms. The incidents occurred over a three-year period beginning in April 2008. Officials remain focused on the priorities of aircrew safety and combat readiness. The return-to-fly plan implements several risk mitigation actions, to include rigorous inspections, training on life support systems, and continued data collection.

“We now have enough insight from recent studies and investigations that a return to flight is prudent and appropriate,” [Air Force Chief of Staff Gen. Norton] Schwartz said. “We’re managing the risks with our aircrews, and we’re continuing to study the F-22’s oxygen systems and collect data to improve its performance.”

The entire fleet will undergo an extensive inspection of the life support systems before returning to flight, with follow-on daily inspections, officials said. The aircraft is capable and authorized to fly above 50,000 feet. Pilots will use additional protective equipment and undergo baseline physiological tests. The return-to-fly process will begin with instructor pilots and flight leads regaining their necessary proficiency, then follow with other F-22 wingmen.

Prior to the stand down, ACC officials convened a Class E Safety Investigation Board in January 2011 to look into hypoxia-related reports. At the same time, a Hypoxia Deep-Dive Integrated Product Team began an in-depth study on safety issues involving aircraft oxygen generation systems.

In June 2011, the Secretary of the Air Force directed the Air Force Scientific Advisory Board to continue the oxygen generation study concurrent with the ongoing SIB. A releasable report will be made available later this year.