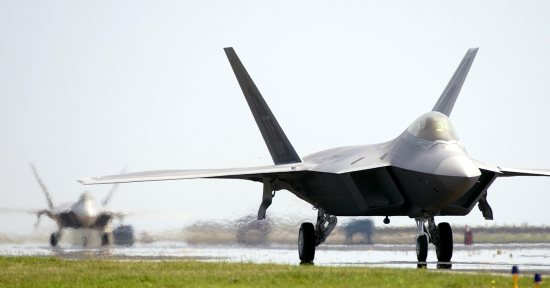 Lockheed Martin’s F-22 Raptor is one of the most expensive and hotly debated weapons in the American arsenal. But for the time being, all 150-plus planes in the fleet are staying on the ground until vital questions about the aircraft’s oxygen system can be answered.

Officials say that the grounding was prompted by increased reports of both hypoxia and decompression sickness, also known as “the bends.” Hypoxia develops when the brain is deprived of oxygen, leading to disorientation, poor decision making, and in extreme cases, black out and death. Decompression sickness is caused by gas bubbles manifesting themselves after returning to normal, sea-level pressure. Both of these issues are extremely dangerous and suggest that the aircrafts onboard oxygen generation system is to blame.

This is not the first red flag over the aircrafts oxygen system. Initial concern arose after a deadly crash in November 2010. Investigators at the site believed that the onboard oxygen system might have failed, prompting officials to restrict the Raptor to operations below 25,000 feet. For context, Wikipedia lists the aircraft’s service ceiling at 65,000 feet. The symptoms observed in pilots seem to have increased the concern over the pilot’s safety, and the entire fleet has now been ordered to stand down.

Interestingly, Air Force officials are not pointing to a specific problem with the oxygen system. Instead, they call it a “potential malfunction” and cite the November crash and symptoms observed in pilots. There are many ways to take this, some more distressing than others. It could simply be that the Air Force wishes to remain tight-lipped about problems with a high-tech aircraft that they have repeatedly stated is vital to the nation’s security. Reluctance in the face of the press is an understandable concern for any military official. However, another way to interpret these actions is that the problem is identified and endemic to all the aircraft, or they simply have no idea what is wrong and are playing it safe.

And these aren’t the first technical issues faced by the Raptor. Gizmodo reports:

There have been previous mechanical and software problems, too – the sort of things which, to be fair, are not unique to the F-22. Last year, rust problems briefly grounded most of the F-22 force. A whole squadron of Raptors had to turn back from a planned flight from Virginia to Japan in 2007 when their navigational systems went haywire as the planes crossed the International Date Line. In 2006, an F-22 pilot was stuck in his plane on the ground for five hours because the canopy wouldn’t open.

The Raptor is an amazing piece of high-tech machinery designed to withstand incredible forces. As such, problems are bound to occur. Even cars, which are like tinker toys compared to an F22, are often recalled because of unforeseeable problems. However, the F-22 is an awkward position. With a $150 million per plane pricetag, and $65 billion in development costs, to say that the Raptor is expensive is an understatement. Moreover, the F-22 is designed to maintain air superiority by being faster and deadlier than anything out there, and, as Stars and Stripes reports, has never been flown in combat. Some have questioned whether this aircraft is anything more than a deterrent against non-existant threats.

Air Force officials have said that though the Raptors are out of the air for routine operations, they can be made available for national security operations and on a case-by-case basis as necessary. But for the Raptor and its supporters, this is an embarrassing turn for the world’s only operating fifth-generation fighter.

(via Gizmodo, image via Wikipedia)