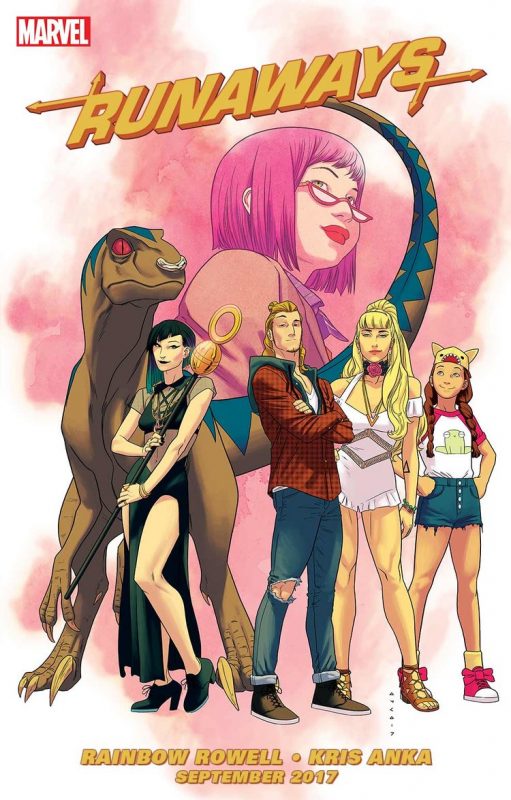 We know that Marvel’s Runaways, created by Brian K. Vaughan and Adrian Alphona, will soon be a live-action TV show on Hulu. However, the series is also finding new life in comic form, thanks to popular YA writer Rainbow Rowell and artist Kris Anka. With this revival, they hope to attract a wider readership to comics.

On her personal blog, Rowell has expressed how thrilled she is to be writing Runaways. She’s also received some questions from fans who love her work, but who’ve never read comics before and are a little intimidated by this unfamiliar medium. She does an awesome job of breaking down what she’s doing with Runaways, and how readers can get their eager little hands on the title.

When asked if she’s writing a novelization of Runaways, she says “Nope, this is a monthly comic book. I’m the writer, and Kris Anka is the artist. It kicks off in September.”

When asked if a new reader needs to know Marvel history in order to get it, Rowell says, “Heck no. If you’re not a regular comics reader, I think Runaways could be a really good first book for you. I’m writing it so that it’s welcoming for new readers. And Runaways has always operated sort of independent of the larger Marvel Universe, so you don’t really have to know the lay of the land. Plus, it’s a relatively young series. You could read the original run over one (great!) weekend if you felt like it.”

So, how does one go about finding these comics if you’re not already a regular comics reader. Rowell breaks down the options: local comic shop, digital version, mail subscription, trade paperback. She then goes on to clarify that, while it’s totally awesome to read things in trade, readers who want the title to succeed should strongly consider buying single issues. Here’s why:

“Comic books are collected in five- or six-issue collections that are sold wherever books are sold. I read a lot of comics like this. The downside of this option is that a title can be canceled while you wait for the trade. It’s kind of like expressing support after the fact. THAT SAID, this is a fun way to read comics; it’s how comics get into libraries; and I’ll take your eyeballs anyway I can get them.”

If you want to make sure Marvel knows you want this title, ordering and buying the issues as they come out is the best way to send that message. That said, as Rowell points out, there are tons of options. She was even kind enough to link to our post, “How To Buy Comics: A Beginner’s Guide,” which is really sweet of her!

Are you excited for more Runaways?