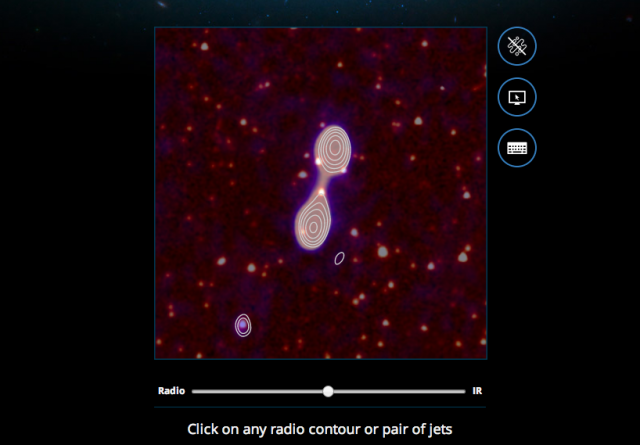 Man, what did people do on long train and bus rides before crowdsourced science projects were a thing? Just sit on their hands and wonder about all the science they could be doing if they weren’t stuck on a bus? If you’ve got an Internet connection and a laptop, though, then you can make your science exploration dreams a reality with Radio Galaxy Zoo.

Launched today by the Zooniverse, a “collection of web-based citizen science projects,” Radio Galaxy Zoo allows participants to search for  supermassive black holes in galaxies by matching up infared images of galaxies to radio images from CSIRO’s Australia Telescope. It’s similar in some respects to Zooniverse’s first crowdsourced project from 2006, “Galaxy Zoo,” which prompted volunteers to split witnessed galaxies into several categories: ellipticals, mergers and spirals.

But why not let computers do this work? The Radio Galaxy Zoo website explains:

If we see three blobs of radio emission, that could either be three separate galaxies or a black hole and its two jets. It’s possible for a human to tell by comparing the radio and infrared images – if the infrared shows three galaxies in a row, lining up with the respective radio spots, then it’s probably three separate galaxies. If the only infrared source is in the centre, then it’s probably a black hole and two jets. Computer programs cannot compete with the human brain for pattern recognition, especially if the radio emission is uneven or distorted.

So what are you waiting for? There’s space out there to classify, dude. What were you going to do instead this morning — your job? Pfft.