It's not even that serious, you guys. 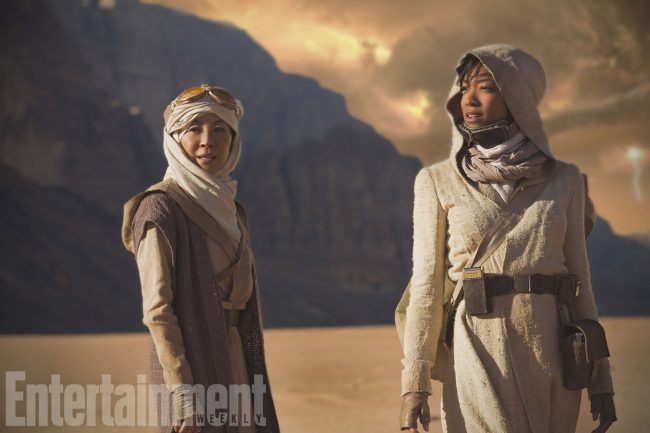 It always makes me laugh whenever the very people who complain that “liberals are too sensitive,” or that we’re seeing injustices where they don’t exist, are the first people to pitch a fit at the slightest hint that maybe white, straight, male, cis, able-bodied, straight-sized people aren’t the only people in the world. It doesn’t surprise me, but it does always make me laugh. After all, people often project their own behavior on others, amirite?

We were thrilled when the first full trailer for Star Trek: Discovery dropped—thrilled that it was both putting women front and center straight out of the gate, and that they were also women of color. And we weren’t the only folks who were happy about it. Twitter abounded with love for the trailer and the first image released by the show, excited about the possibilities that become available when you put two nuanced female characters at the heart of a story.

And then, there was the ignorance, brought forth by people who claim to be fans of the Star Trek franchise, but don’t really get what it’s actually about:

Star Trek Discovery aka “SJW The Next Generation” Trailer Drops. Seems BLM made the trailer…

And the piece de resistance…

Star Trek introduces #WhiteGenocide in space… as if “diversity” could make it to spacehttps://t.co/r4y7cohOXe

WHITE GENOCIDE?! Give me a goddamn break.

What’s frustrating to me as a life-long Star Trek fan is that the increased diversity of Discovery seems long-overdue for a franchise like Star Trek. It’s is over 50 years old, and started with the promise of inclusion.

Sure, the original series started with a white, cis, straight, male captain of the Enterprise, but it also had officers in Uhura and Sulu. It spoke to inclusion and the human ability to work peacefully together with others across political and even species lines by having an officer in Chekov and a First Officer in Spock, a reminder that the Federation of Planets is only possible when multiple planets and species get together in peace. Gene Roddenberry set his creation in a future where humanity worked together across racial and political lines without question or hesitation. It was a future in which we’d outgrown things like currency, greed, sexism, and racism. Bottom Line: 9 regular cast members, 2 actors of color (22%), 3 women (33%).

Now, obviously, any television show is a product of its time. No matter how progressive Roddenberry might have liked to be, he had a network, executives, and a skittish American public to contend with. Still, the show managed to do a lot for what the time would allow. We could only get better from there, right?

Eighteen years later on The Next Generation, there were still two white men (and now, both human), Captain Picard and William Riker, running the Enterprise. There was one black human in Geordi, and two black aliens in Worf and Guinan. This time, however, the Chief Medical Officers, (Beverly Crusher and Katherine Pulaski) were women, and the ship had a female counselor with a sexually adventurous mother. Still, it was majority-white, majority-male, and two white men were in charge of the ship. Bottom Line: 9 regular cast members, 2 POC (22%), 3 women (33% – Crusher and Pulaski traded places, so I’m counting them as 1 female slot). Zero change from TOS.

It wasn’t until six years into TNG that we finally got a black Captain in Benjamin Sisko on Deep Space 9, who not only had a black son in Jake, but who also had a long-term committed relationships with black women (his wife from before the show, who made appearances in flashbacks and Prophet visions, and Kasidy Yates). Worf was back, along with Miles O’Brien from TNG, who brought with him his Japanese wife, Keiko, whose role was expanded significantly on this show. We also had a Chief Medical Officer of color in Julian Bashir. Despite all this, the recurring cast remained majority-male, and majority-white.  Bottom Line: 10 regular cast members, 4 POC (40%), 2 women (20% – both Daxes counting as 1). Improvement from TOS re: POC, worse on gender.

Two years into the run of DS9, we got Voyager, and finally, our first female Captain in Kathryn Janeway. This time, not only was there a female captain, but there were more people of color on the bridge than ever before: Chakotay, Tuvok, B’Elanna Torres, Harry Kim (though yes, one was an alien and one was half human). Despite this, again, the main cast remained majority-male, and majority-white. Bottom Line: 10 regular cast members, 4 POC (40%), 3 women (30%). Improvement from TOS re: POC, worse on gender.

Lastly, there was Enterprise. White, male captain? Check. Majority-male and majority-white? Check-check. Sato and Mayweather were basically holding it down for the POCs on that show. Bottom Line: 7 regular cast members, 2 POC (28%), 2 women (28%). Improvement from TOS re: POC, worse on gender.

In fact, in this analysis of Star Trek‘s 42 principal cast members over its five live-action series, only 14 have been women (they count each Dax individually and each female medical officer individually, but don’t count Yeoman Rand and Nurse Chapel on TOS). Only 12 have been POC (they don’t count Jake on DS9 as a main character, and they only count Worf once despite Michael Dorn taking space on two separate shows).

Now, let’s look at the cast of Discovery. While the show hasn’t even aired, and we don’t know how involved each of these actors/roles are going to be, they’ve announced 19 cast members. Of those 19, 6 are POC and 6 are women. Going by these numbers, Discovery already has the best male:female ratio of any other Star Trek series since TOS. It also took over 50 years to get to this point. We were supposed to have gotten better after TOS, and we got marginally better before getting really, really bad again.

These online racists are making a big hullabaloo about “white genocide” when Discovery is still only 31% POC and 31% women. White people still account for a whopping 69% of the people on that show, so they need to just calm the hell down.

As far as comparison to the rest of the Star Trek franchise, while Discovery is much better than TOS with regard to POC, it’s still less successful in the area of gender. In fact, all Star Trek shows seem to do better when it comes to POC than it when it comes to women.

When we compare the show to our country IRL, according to the most recent U.S. Census, the United States is 50.8% female. Gender-wise, Discovery STILL doesn’t match our actual society, despite the “feminist conspiracy” some think is at play here.

When you break it down by race, the show is closer to accurate, though still lagging a bit. Total POCs on Discovery=31%, total POCs in the U.S.=38.4%.

What’s disappointing to me from a Puerto Rican perspective is that Latinx are 17.6% of the U.S. population, making them the largest minority group in the country. And yet Star Trek has only ever had two Latinx actors in their main cast—on one show. And only one of those actors was actually playing a Latinx character. Roxann Dawson’s B’Elanna Torres on Voyager was half Mexican/half Klingon. Robert Beltran, who played Chakotay on Voyager, is himself Mexican, but was playing a strictly Native American character. And there’s one engineering dude on TNG whose name I can’t even remember, that’s how important a character he is.

As of right now, Jason Isaac’s character is named Captain Lorca. I’d like to think that he’s named that, because his parents were huge fans of the Spanish playwright Federico García Lorca. If he’s playing a Spanish character, I will sigh the deepest sigh and remember that Spain is in Europe. If he’s playing a Latin American character, I will have stronger opinions. Point being, where are my human Latinx in space? Do we only cast Latinx actors when there are stories about drugs, or crime, or border crossing? Apparently.

Be that as it may, it’s thrilling that half of the women on Discovery are women of color, meaning that women of color make up half the total number of POC on the show! What still bothers me, though, and what I hope Discovery remedies is that Star Trek, while having had some great female characters, never seems to have enough of them. Women have been underrepresented since the beginning of the franchise, and that hasn’t changed. Not even with Discovery. So at the very least, Discovery should be about its women. Women deserve at least that much if the show isn’t even going to pay them the respect of representing their numbers accurately.