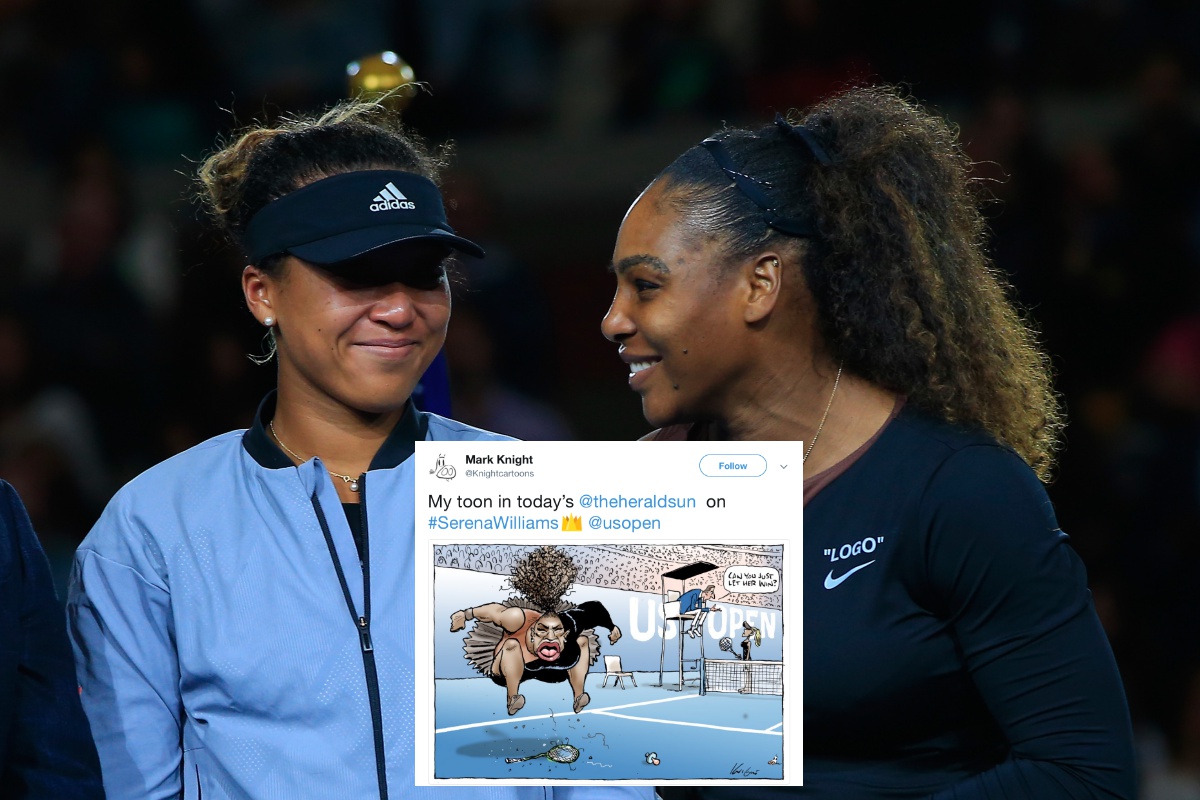 Since the controversial U.S. Open and chair umpire Carlos Ramos’s calls against Serena Williams, there has been back and forth discourse around sexism, racism, sportsmanship, ego, and what exactly we should call it when rules are not unilaterally enforced.

As someone who played tennis as a kid and was told I was “too aggressive” and therefore quit so I could watch Digimon instead, I know where I stand on the issue.

I know full well that black women, especially black female athletes who are dark-skinned, are treated like hyper-masculine brutes even when they wear tutus. I know they are expected to have humility even when they are the best and even when they stand up for themselves, they are held to a higher standard.

So when this cartoon came out by artist Mark Knight in Australia’s Herald Sun, it only reinforced that despite everyone saying this has nothing to do with race, it seems like it is on both sides.

Well done on reducing one of the greatest sportswomen alive to racist and sexist tropes and turning a second great sportswoman into a faceless prop. https://t.co/YOxVMuTXEC

About as subtle as Fran Drescher’s voice 🤦🏿‍♀️ https://t.co/VM23b4XnlI

For all the talk about people being too sensitive and the need for nuance, there is again this need to prop up racism because it agrees with a point you have about an event. You may believe that Serena William’s conduct at the Open was unsportsmanlike. You may agree with the call even though you understand that it is not enforced by everyone. You may even disagree that the call was based on racism or sexism.

But when you see this, art that reduces Serena Williams into a racist character, and erases Naomi Osaka’s own blackness in order to emphasis Williams’ (let’s not forget that Osaka is half-Haitian and has lived in America most of her life even though most media has ignored that), surely you can see that this is what people are mad about.

Williams never directed her rage towards Osaka and as someone who has been a fan of Williams, I’m sure Osaka knows that since there are a ton of pictures showing Williams supporting Osaka. Osaka has beaten Williams twice this year; she may have won anyway had events gone on in a different fashion.

What happened during that match wasn’t fair to anyone, but Women’s Tennis has really been showing its whole ass in terms of how it treats its female players. You can hate Serena Williams, think she’s a bully, but as someone who’s watched male competitive sports for years, what Serena did was tame.

The fact is that when people use racist images to depict her, all that does is show an iota of the vitriol she’s been dealing with her entire career. Maybe take some of that empathy people have towards actual bullies and sex offenders and give it towards Serena Williams.