Rachel Bloom and the Devil Talk About Rape Culture

Who knew I'd agree with the Devil? 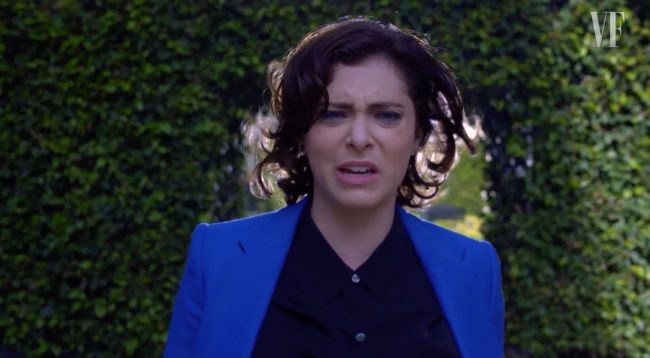 Rachel Bloom has always been very vocal about the pressing issues in our culture. If it isn’t singing a song about the importance of voting, it’s a sketch outlining the necessity of mental health checks. Her brilliant TV show, Crazy Ex-Girlfriend, is often trending on Twitter because of the catchy songs and their relevant topics.

So now, partnering with Refinery29, Rachel is bringing the Devil in to talk about how rape culture is something that we should all be discussing: “Let’s talk about it, not normalize it,” reads the title card.

And, surprisingly, the Devil also makes some great points, while he and his advocate learn what so many women experience and the way their experiences are treated.

But as the Devil points out, rape culture isn’t just geared towards women. In our media, we also make light of consent in regards to men. In movies, TV shows, and comedy clubs, jokes about prison rape are common. It’s considered “funny” or assumed that a man must want to have sex when an older woman comes on to a younger man or when a woman like Kim Basinger’s character in Fifty Shades of Grey takes the virginity of a much young man, we’re supposed to see it as fine. (To be fair to Fifty Shades of Grey, they do a great job of shaming Basinger’s character when it is discovered what she did to Christian Grey. And this is the only time I praise that series for anything.)

What’s also excellent about this informational time with Ms. Bloom is that it’s part of a series of Rachel using comedic videos and songs to teach us about important cultural concerns. Whether it is body image or using the Devil to bring up points about rape culture, Rachel Bloom has a way of addressing issues that show her point of view while also educating us all.

This video is just the first of three that Rachel wrote. The other two will focus on STD testing and vaginal health.

When I was asked to write these shorts (there are 3 in total), it was maybe the biggest tonal challenge I’ve faced as a writer. We filmed them 9 months ago and now they’re finally out and I’m so proud. (Co-written with @ilanacubana & @hailstormchavez, directed by @kimmygatewood) https://t.co/D2iuBXkp2q

Rachel Bloom may be wrapping up Crazy Ex-Girlfriend, but hopefully, this is a new partnership that we’ll get to see more of. Rachel has always had the kind of voice online that makes us want to listen. If it isn’t from her songs, it is from her wit. We want her around as much as humanly possible.

We want to listen to what Rachel Bloom has to say. A lot of the issues she explores as songs, and we’re thankful when those get in our head and make us think about it more and more. But this sketch shows how equally effective a simple back-and-forth conversation can be, and it gives us a blueprint for how to have similar conversations in our own lives.