The Rise of the Queer Female Dramedy Where, Spoiler, No One Dies 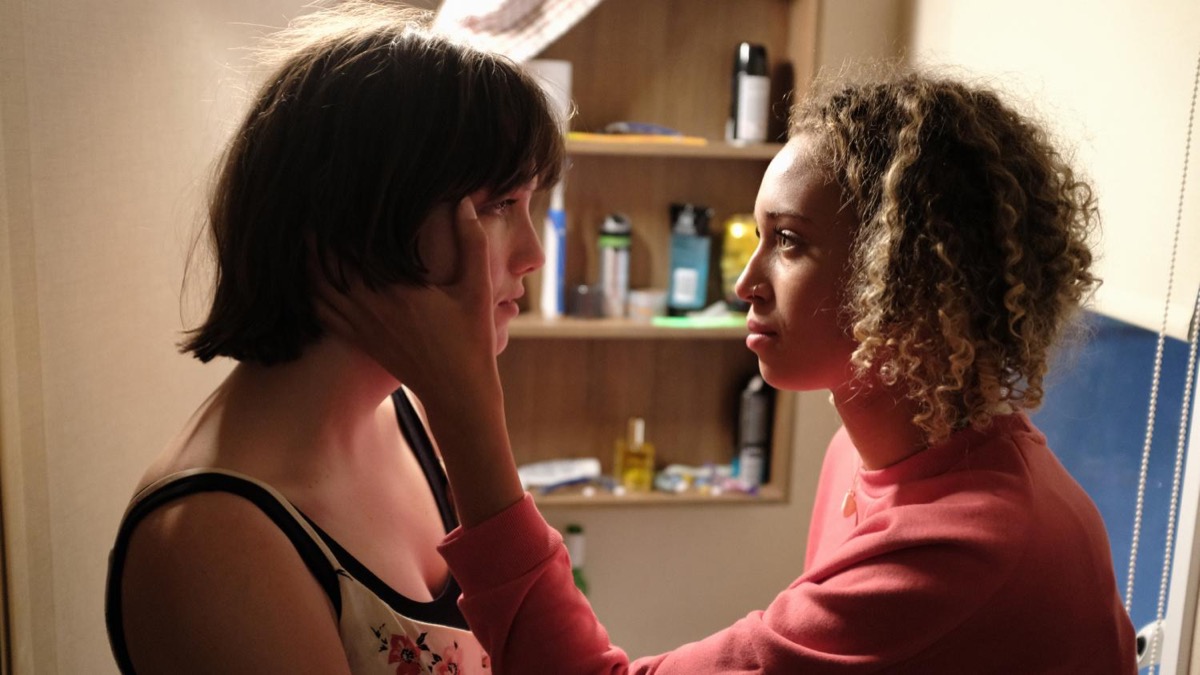 Happyish, queer female dramedies are a rare beast. Female and non-binary film characters who identify as bisexual or lesbian and don’t end up miserable—or worse—are still not as common as one would hope.

In the beginning was The Color Purple and Desert Hearts, followed by The Watermelon Woman and the glorious But I’m a Cheerleader. Between the mid-1980s and the late 1990s, queer female moviegoers finally started seeing themselves represented on the silver screen.

Present-day dramedy, however, has never been Hollywood’s preferred genre to portray queer female relationships—at least, not in the mainstream. It is telling that last year’s Happiest Season was the first holiday romcom produced by a major studio to focus solely on a queer female couple.

When queer women’s stories started reaching a wider audience, it was mostly by way of heaving corsets and forbidden relationships. Over the last decade, viewers have been gifted beautiful period films zeroing in on the dynamics of queer love stories. From the iconic Carol to Keira Knightley’s turn as bisexual writer Colette, via Céline Sciamma’s vibrant Portrait of a Lady on Fire and new drama The World to Come, looking back seems to be the way forward.

Costume dramas are unparalleled at visualizing the challenges faced by LGBTQ+ couples in the past and offering insights into our times. Yet, they still mainly end in a separation or a tragic death.

Even when bisexual and lesbian women and femme-presenting non-binary folks are featured in more contemporary comedies, the main conflict seems to be coming out, or trying not to hurt others in the process. (We’re looking at you, Imagine Me & You.) Television has done better throughout the years, with a wave of openly queer female characters, whereas films are still lagging behind.

A remarkable effort from director Clea DuVall, the already-mentioned Happiest Season, is all about struggling to live one’s truth. Olivia Wilde’s directorial debut Booksmart, on the other hand, presents an out-and-proud queer teenager in co-protagonist Amy. Similarly, Netflix’s Moxie briefly sees two queer women of color being their true selves, no drama attached. It’s definitely refreshing to watch queer, young, female characters being unapologetically themselves onscreen. But, more often than not, their storylines aren’t the main plot.

Where are all the joyous, queer, female-fronted stories at, one dares ask? While it’s important to portray the hardships connected to being LGBTQ+, it is also crucial to offer a positive, joyful representation of queerness. The most recent international festival circuit has ushered in the rise of the queer female independent dramedy where—shocker—no one comes out or dies. If not of old age and well after the end credits have rolled, anyway.

BFI Flare is the latest in a list of LGBTQ+ film fests championing queer female stories. This year, their rich (geoblocked for those outside the U.K., sadly) slate also featured four female-directed dramedies that are worth looking out for at upcoming festivals.

Led by two impressive central performances, the film revolves around the unique, intimate bubble these girls create to shield themselves from the outside world. A sensitive look at adolescence, the movie paints a budding queer relationship as brave and silly at once. Claudia and Grace don’t shy away from addressing the big, existential questions, all while basking in the balmy summer captured by cinematographer Matthew Chuang’s camerawork.

Premiered at Adelaide Film Festival last year and screened at Mardi Gras and BFI Flare, My First Summer will have its U.S. premiere at Santa Barbara International Film Festival.

It doesn’t get any more British than Sweetheart. Director Marley Morrison’s feature debut is set in a U.K. caravan holiday park where queer, introverted teen AJ (Nell Barlow) spends the summer with her accepting, at times dysfunctional family.

Sweetheart is a dry, humorous coming-of-age story with a side of romance when AJ falls for stunning lifeguard Isla (Ella-Rae Smith). The film gives access to AJ’s innermost thoughts through hilarious, brutally honest voiceovers, and packs an emotional punch, too. Premiered at Glasgow Film Festival and screened at BFI Flare, Sweetheart doesn’t have a U.S. premiere scheduled yet, but check upcoming festivals’ lineups.

Okay, Finnish filmmaker Zaida Bergroth’s Tove is technically a period drama, but the biopic on Moomin author and illustrator Tove Jansson is also an uplifting, stubborn affirmation of identity. In the film, the protagonist embarks on a whirlwind relationship with theater director Vivica Bandler (Krista Kosonen) that will shape her professional life, as well.

Alma Pyösti plays the titular role, giving a restrained performance conveying the complicated feelings behind unrequited love and fear of failure. Tove had its North American premiere at TIFF last September and will screen at Seattle International Film Festival and Wicked Queer, The Boston LGBT Film Festival next.

Also known as Kiss Me Before It Blows Up, this is a straight-up, fast-paced romantic comedy from director Shirel Peleg. The film stars Moran Rosenblatt as Israeli lesbian bar owner Shira. When she brings her German girlfriend, Maria (Luise Wolfram), home to meet the family, the greatest ordeal is to conquer the favors of outspoken grandma Berta (Rivka Michaeli), dubbed “The Real Jewish Princess.”

The film plays on all the most classic romcom tropes: opposite attracts, culture clash, and meddling families, while also poking fun at the U-Haul lesbian cliché. Yet, it never questions anyone’s sexuality; the focus isn’t on coming out, but on prejudice and collective trauma. Kiss Me Kosher’s at times jarring tonal shift mostly works, with the film encouraging conversations rather than trying to provide definite answers. Peleg’s movie will be screening at various festivals in the U.S., including Tampa Bay Jewish Film Festival and Wicked Queer.

BFI Flare aside, a special mention goes to Rachel Sennott as bisexual hot mess Danielle in Shiva Baby and as Hannah, along with Madeline Grey DeFreece as Carrie, in original queer coming-of-age drama Tahara. There’s plenty of cheery, queer female stories out there; you just have to look for them in between the unhappy endings.