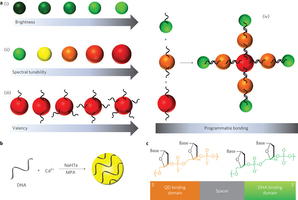 Researchers from the University of Toronto have used quantum dots to develop artificial molecules that they then used to create of a new type of nanoantena that can control and direct the energy absorbed from light. Quantum dots are semiconductive particles that can absorb and emit light efficiently at chosen wavelengths. What the researchers did was develop a successful way to build higher-order structures, or complexes, out of the different types of quantum dots. Led by professors Shana Kelley and Ted Sargent, the research team brought together expertise about DNA and about semiconductors to formulate a generalized strategy about how to bind the different types of nanoparticles to each other.

Published in Nature Nanotechnology the research shows that you can create a more effective nanoantenna by increasing the amount of light absorbed, and then funneling the light energy into a single site within artificial molecules made of quantum dots. But the thing that makes this research possible isn’t just an understanding of semiconductors and nanomaterials. According to the researchers, DNA was key to making this research successful.

The high specificity of DNA means that it is willing to bind only to very specific complementary sequences. This allowed researchers to build a systematically engineered, designer structure out of the nanomaterials. Sargent explained how the researchers used the DNA in a University of Toronto press release:

The amazing thing is that our antennas built themselves – we coated different classes of nanoparticles with selected sequences of DNA, combined the different families in one beaker, and nature took its course. The result is a beautiful new set of self-assembled materials with exciting properties.

These new antennas made of self-assembling nanomatierals are different from traditional antennas which typically increase an electromagnetic wave (like radiowaves) and after the energy is absorbed funnel it into a circuit. The nanoantennas increase the amount of absorbed light and funnel it to a single spot in the artificial molecules.

The inspiration for this concept comes from natural light harvesting antennas, the machinery in leaves that makes photosynthesis efficient. According to the researchers, this is just the beginning of what semiconductor quantum dots could be used to create, because having synthesized artificial molecules made from the building blocks of semiconductor quantum dots greatly opens up researcher’s ability to manipulate materials on the nanoscale.