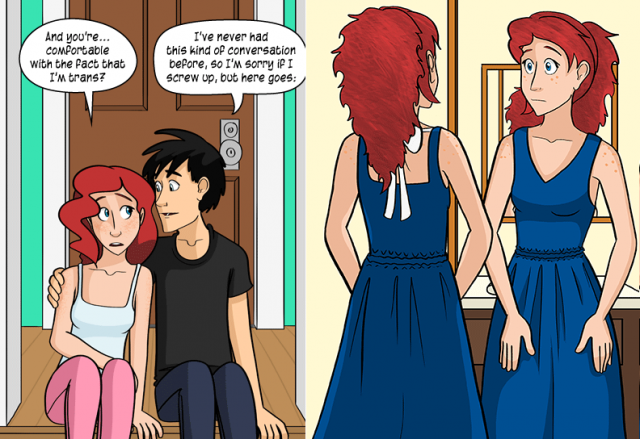 Questionable Content by Jeph Jacques is one of the most popular and longest-running webcomics online. Aside from a few filler guest strips, Jeph has been writing and illustrating QC since 2003, and since 2004 it’s been updated five times a week. It’s a tough commitment but after only a year of QC, it became his full-time career, and now has amassed 2849 editions. Not many webcomic artists ever achieve either of those feats.

QC started as a simple gag comic about indie-rock music starring Marten and his sociopathic anthro-PC Pintsize. It’s evolved beyond that into a slice-of-life story about a large group of interconnected friends. Supporting characters include employees of Dora’s coffee shop, like Raven and Penelope, and Marten’s neighbours, Marigold and Hannelore. With over 30 recurring characters, QC is a sprawling tale that covers humour, romance, sex, rock music and sci-fi while discussing relationships and emotional trauma. If you have a heart and soul and your emotions haven’t yet been destroyed by current events, you’ll find something to enjoy in QC.

I sat down with Jeph to talk about the development of QC and how the comic has grown – including the addition of a trans character.

Marcy Cook (TMS): Back when QC started, which must seem like aeons ago for you, it was a webcomic about Marten and the alternative music scene. Now, it’s grown into an exploration of life, relationships, mental health, and (with the introduction of Claire) transgender issues. Was the shift away from your initial format planned, or was it organic? What was the story arc for you that changed QC into it’s modern form?

Jeph Jacques: It was mostly an organic shift. I did make a conscious decision to stop making indie rock jokes, but even that was a gradual process, and not a clear-cut, “Okay, I’m done with Arcade Fire gags now,” moment. I think the core of QC has always been the relationships between the characters – that’s always been the most fun and interesting part for me to write. But over the years, the focus of the comic has definitely broadened from being mostly about Marten, to being about Marten and Faye, to being about basically everybody in their social circle, to being about a bunch of different social circles that overlap in certain ways. I think the Marten/Faye storyline starting at comic 500 was the beginning of this change, where I decided to address the will-they-won’t-they of the Marten/Faye relationship. That really opened up the rest of the comic to further exploration.

TMS: What do you think brings these characters together, and holds them together, in such a tight knit group, when they come from very different backgrounds and all have different life experiences?

Jacques: One of the major themes of my comic is acceptance, and the characters generally accept each other for who they are. They’ve all sort of wandered into this group and been accepted, and I think that’s a big part of what keeps them close. They support each other in all sorts of different ways – Marigold and Hannelore in particular seem to have formed this weird sort of symbiosis where they help each other be more functional. And then there are the robots, whose literal purpose is to help out “their people.” That, and they like making sarcastic quips and run-on metaphors at each other.

TMS: Mental health and coping is an ongoing theme in QC, from mysophobia with OCD (Hannelore), PTSD and alcoholism (Faye), low self esteem and isolation (Marigold), sociopathy (Pintsize), and insecurity (Dora). It adds a layer of realism to the comic that has talking anthro computers and invisible intelligent jets. Why the focus on coping with mental health issues?

Jacques: Exorcising my own demons, probably! They’re all things I’ve had to deal with or am still dealing with, although usually not to the extremes I put my characters through [laughs]. They’re also problems a lot of other people struggle with, and I think having a piece of entertainment that addresses them in a positive light can be very helpful. I get a lot of satisfaction from emails telling me my comic has helped people deal with their own problems. The longer I do the comic, the more interested I become in writing experiences other than my own, and I think the writing is beginning to reflect that.

Jacques: My goal is to portray people of all orientations as people, first and foremost. This has a number of benefits – it makes for good writing, it helps people who share those orientations feel included, and it helps people who have other orientations understand them better. I live in a very liberal, sexually diverse area of the [US], and a good portion of the diversity in the comic is reflective of the reality in which I am privileged to live.

TMS: For me, the introduction of Claire (#2323 was is the “I’m trans” moment) is huge; as a transgender woman I rarely get to see a reflection of my reality. What was really interesting was the reaction of the other characters: none of them had a negative reaction, or even inappropriate questions. Did you do a lot of research and planning for Clare’s introduction, and how the other characters would interact with her?

Jacques: I did quite a bit of research, although I have to confess that a lot of it was simply thinking about the implications and responsibilities of what me, a straight white male, writing a trans character would be. I didn’t want to screw it up! In writing Marten’s reaction, it just seemed natural – both fitting for his laid-back character and also reflective of my personal experiences meeting trans people. Way back in college, before I even really understood what being trans was, when I met trans folks it was always like “oh, okay.” Not a big deal, just another way for people to be.

We’re getting to a more tricky part of the story now, because most of the characters don’t actually know Claire is trans yet! So it remains to be seen how they’ll react if and when they find out. While I could see some of them having questions – possibly inappropriate ones. One of my goals is to make QC feel like a safe space for trans folks, so it’s something I’m going to have to be very careful about writing.

TMS: I recall that you once said you had planned to introduce a transgender character into QC much earlier than Claire’s initial appearance. Was the plan always to have this character dating Marten? He could be the most cis heteronormative male character in QC – why was he your choice for Claire?

Jacques: It happened very naturally. I had no specific romantic plans for Claire, or a trans character in general, before it came together. It was probably inevitable though, since so much of my comic is about romance! Claire’s appearance in the comic happened to match up with a point in Marten’s development where they seemed to fit together, and the more I wrote them interacting the cuter it got. Marten doesn’t strike me as the kind of guy to wrestle with his sexuality – he’s attracted to Claire, and that’s good enough for him. I don’t know if that makes him less heteronormative or what, but it seems to fit.

TMS: Lastly, you’ve dealt with many topics in QC already, btu do you have any topics that you really want to address that you haven’t reached yet?

Jacques: There’s this common misconception (mostly among bigots) that writers keep a sort of “diversity checklist” that they feel compelled to complete in order to be “properly” socially conscious or whatever. The reality is that writing diversity is fun! It’s challenging and risky, particularly if you’re the straightest, whitest dude in the world like me, but it’s fun. So there’s definitely stuff I’d like to expand more on in the future. For instance, I don’t have enough people of color in my comic. And it would be fun to write more gay dudes! Marten’s dad and step-dad are tons of fun, but they’re ancillary characters so I don’t get to play with them as much as I’d like.

Before I approached Jeph for an interview, I re-read QC from the start; it took me five days to get through them, and I enjoyed reading the older comics that I’d forgotten. But if you’ve never read QC and feel a bit daunted, start at #500. And enjoy!