Putin Is Trolling Us Even More Brazenly Than Usual 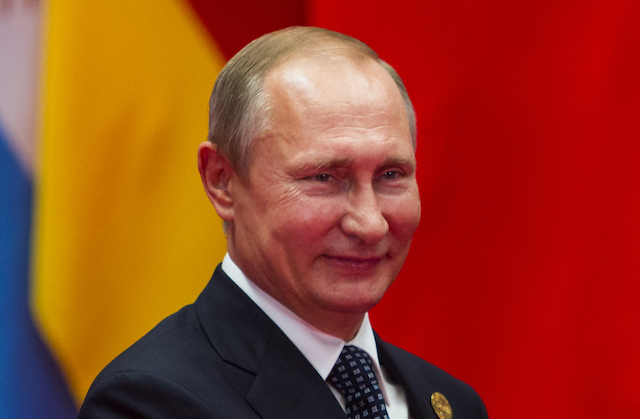 As it turns out, the sequel to the Comey Firing Week has been, true to sequel form, bigger in every way. First, we had reports that Donald Trump gave Russian officials sensitive intel belonging to Israel just to impress them—and the obvious ensuing shitstorm of “no he didn’t,” “yes I did,” “OK he did but it’s nbd”—and then news broke that fired FBI Director James Comey kept extensive memos of his contact with Trump, with one of them indicating pressure from Trump for the FBI to stop investigating fired National Security Advisor Mike Flynn.

It’s been quite a week, and we’re only two days in. The idea of impeachment has been thrown around—not just by the Democrats—and the Republican chair of the House Oversight Committee, as well as Republican speaker of the House, are looking to get their hands on Comey’s memo. Meanwhile, we still don’t know exactly what Trump said to Russian officials in the White House, but no one defending him has definitively stated that he didn’t share highly classified intel from an ally as was reported—simply that the president has the right to do that if he wants and that it wasn’t really all that secret anyway, so, like, get off their backs about it. Fake news!

That’s where Vladimir Putin comes in. After serious security concerns were expressed over Russian press being allowed to bring equipment into the Oval Office, with a former deputy director of the CIA saying it was a bad idea, Putin has now told the media, as part of jokingly brushing off the idea that Russia was given secret information, that he’s willing to provide a recording of Trump’s conversation with Russian officials. In the White House. The one U.S. press wasn’t allowed in for, but here he is reminding us that Russian press was. Even if he were sincerely intending to help, publicly declaring that he has the verified information to cut through all our country’s squabbling is pretty much the most condescending way he could go about it.

He’s basically negging us, collectively, as a nation. “Hey, you picked a president who’s totally great and didn’t say anything wrong, and I can prove it with information you’re all too incompetent to get for yourselves.” Troll level: international.

The Russian government has since walked back the original terminology of a “recording,” instead offering a transcript, but it’s hard to imagine that Putin didn’t know exactly what he was doing. Trump himself only recently threatened James Comey on Twitter over having “tapes” of their conversations, only to essentially act like that never happened. (Oh, sorry, he’s very particular about his use of quotation marks. He actually said “‘tapes.'”) They’re like peas and carrots together!

Beyond that, he absolutely knows that there’s no way the United States government—with the notable exception of Donald Trump—trusts anything that comes from him or would accept such an offer, so there’s zero percent chance that this joke was anything more than a way to embarrass the United States on the world stage. That’s pretty much his favorite pastime, and he’s not making any effort to hide it.

Why would he? He’s been brazen about it all along, and intelligence officials have said over and over again that one of his goals in interfering with the U.S. election was simply to erode trust in our government and institutions in order to weaken us, and it’s working. It’s not even surprising that he doesn’t care about making Trump himself look incompetent. That’s what made Russia’s election interference so dangerous. As soon as anyone bought into it, it was effective, no matter what happened to Trump. The only possible outcomes were Trump losing but still eroding faith in the U.S. government “swamp” he so loved to talk about, Trump winning and being a buddy-buddy dictator with Putin, or Trump winning and being a complete failure, reducing us to a joke.

In case you were wondering where we landed with the latter two options, here’s another dispatch from the circus of incompetence:

Also p.s. Trump's bodyguard was photographed carrying around a post-it with Jim Mattis' phone number on it https://t.co/oynQXlLG7j

There was no losing situation for Putin here, and he’s reveling in the one we wound up with.