It’s hard to believe that the epic story that Marvel has spent over a decade building, across more than twenty movies, will soon come to an end … of sorts.

The Marvel Cinematic Universe is far from over, but Phase 3 is set to wrap with Avengers: Endgame next month, and little is known about what’s to come in Phase 4. The studio hasn’t released their upcoming slate for fear of spoilers, and the only film officially confirmed thus far is Spider-Man: Far From Home. Other future movies in the works include a solo outing for Black Widow, films focusing on The Eternals and Shang-Chi, as well as sequels for Black Panther and Doctor Strange, and eventually a third Guardians of the Galaxy.

With several of the OG Avengers set to hang up their proverbial capes after assembling once more, now would be the perfect time for Marvel to focus on the Young Avengers. Kevin Feige has already hinted that they may be a part of the MCU’s future, but with the old guard about to retire, why not now?

The immense success of Black Panther and Captain Marvel proves that fans are ready and waiting to see more diverse superhero stories unfold on the big screen. There are few teams more varied than the Young Avengers. Created in 2005 by Allan Heinberg and Jim Cheung, they are the rare group that is not primarily comprised of members who are straight, white men.

Before anyone loses their mind here, no one is suggesting that we should get rid of the superheroes that we all know and love. What I am saying is that the superhero pool that the films have been drawing on thus far isn’t exactly diverse. This is an issue that has long plagued comic books, and Heinberg and Cheung’s work was incredibly important, signaling a bit of a sea change over at Marvel back in the early aughts.

Young Avengers doesn’t sound that cool on paper, and when the title launched, many readers were concerned that it would just be another lackluster spinoff, the next West Coast Avengers to hit the stands. However, those who read the book quickly realized that, despite their names, these weren’t cheap knockoffs of everyone’s favorite heroes. 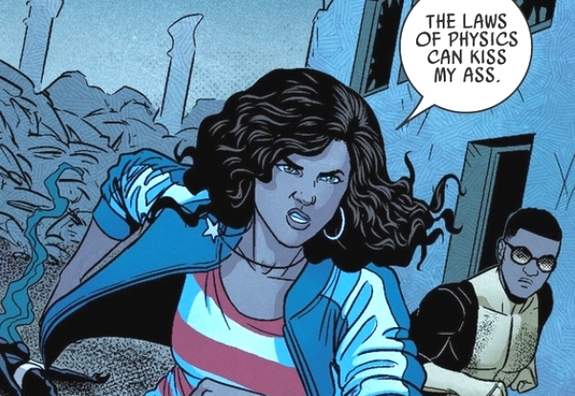 They were fully formed, incredibly compelling characters in their own right. Rather than pale facsimiles of their predecessors, the Young Avengers were a group of misfits who were still desperately trying to find their place in the world. They absolutely loved being superheroes, having yet to become jaded by the grueling business of saving lives.

If the fact that Spider-Man has been rebooted three times in less than twenty years has taught us anything, it’s that teens need heroes that they can not only look up to, but also see themselves in. This is even more evident in the well-deserved success of Spider-Man: Into the Spider-Verse. The film was gorgeously animated, incredibly well written, and also carried within it the awesome message that anyone can be Spider-Man.

The Young Avengers could further drive this point home with its diverse cast of young heroes. There’s someone on this team that everyone can identify with.

The book’s original run began with Nathaniel Richards, a.k.a. Iron Lad. He’s the guy who would one day grow up to become Kang the Conqueror, one of the Avengers’ greatest foes. However, this version of Nathaniel has yet to begin his villain’s journey. He wants to forge a different path for himself and decides to recruit other young heroes to help him do it.

With him is Elijah “Eli” Bradley, who goes by Patriot. He’s the grandson of super-soldier Isaiah Bradley, a black, alternate version of Captain America, who was introduced into comics continuity in 2003.

They were joined by Theodore “Teddy” Altman, a.k.a. Hulkling, and William “Billy” Kaplan, a.k.a. Wiccan. The former is a shapeshifter, and the latter has mysterious magical powers, but to reveal more about their backstories would be a pretty massive spoiler for those who haven’t read the comics. Billy and Teddy also had a romantic relationship, and there weren’t many LGBTQ+ romances in mainstream comics back then. 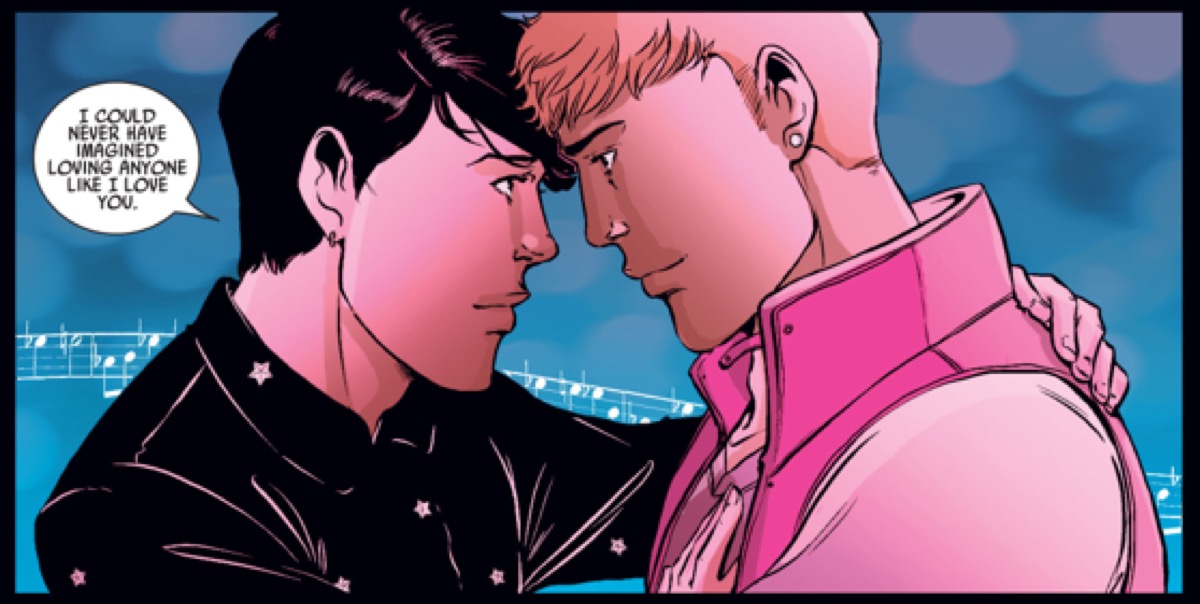 Billy and Teddy in Young Avengers.

Unfortunately, there really aren’t too many now, either.

Rounding out the team are two girls who kind of forced their way into the fledgling group. Kate Bishop is a total badass who patterned herself after Hawkeye and Mockingbird after the former’s “death.” Cassie Lang is Ant-Man’s daughter, who winds up going by the codename Stature. That’s the initial incarnation of the team, although there were some lineup changes before run’s end.

The equally awesome second volume of Young Avengers was written and drawn by the amazing team of Kieron Gillan and Jamie McKelvie, respectively. These are the guys who brought us Phonogram, as well as The Wicked and the Divine. Their work kept some of the original characters, but incorporated new ones, as well.

There’s Kid Loki, who’s the god of mischief we’re all familiar with, only reincarnated into the body of a young boy. His journey was a complicated one, but death often is in comic books. Gillan and McKelvie made this genderfluid, pansexual antihero one of Marvel’s most complex and beloved characters.

They also added the wisecracking America Chavez, a.k.a. Miss America. She would later go on to become Marvel’s first Latin-American LGBTQ+ character to star in her own ongoing series. This volume also included total dreamboat Kree superhero No-Varr, a.k.a. Marvel Boy.

Bringing more variance to the types of heroes populating the Marvel Cinematic Universe is certainly one reason for Marvel to focus on the Young Avengers, but it’s not the only one. It’s also vital to note that there are easily enough amazing stories to mine here for a trilogy of films. The connections between the Scarlet Witch and certain characters, as well as Vision, could be used as a way to introduce them into movie continuity.

It would be incredibly cool to see Jessica Jones help facilitate a meeting between the young and grownup Avengers like she did in the comics. Of course, it’s unlikely that Krysten Ritter will reprise the role now that Netflix’s corner of the MCU is going dark. Plus, those shows lacked anything more than the most tenuous connections to the films in the first place.

The X-Men’s inevitable introduction into the MCU could even help pave the way for the Young Avengers. With the Disney/Fox deal finally closing, it’s only a matter of time before Marvel’s Marvelous Mutants will find their way into the Marvel Cinematic Universe. 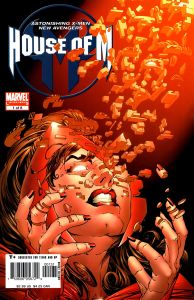 This could be done through the House of M storyline from the comics. The films have always only loosely adapted arcs from the source material, so it would be some kind of riff, rather than a straight adaptation, but it’s definitely one way to bring the X-Men in without compromising the entire story that the studio has spent so many years building.

House of M sees a distraught Scarlet Witch end nearly the entire mutant population with a single phrase: “No more mutants.” What if that’s the world that these heroes have been living in all along? The story would be a bit backwards, but it could serve as a way to eventually integrate the X-Men into that world. Sure, making the MCU a result of some reality that had been altered by Wanda would rewrite the universe’s history, but apparently, Avengers: Endgame is going to be something of a reset for the MCU anyway.

Another possibility would be for Wanda to somehow create mutants in a similar way, rather than almost ending their entire species like she did in the comics. Perhaps she could just utter the word “mutants.” With everything that went on in Avengers: Infinity War, it wouldn’t be too much of a stretch for the Scarlet Witch’s mental instability to become more than she could handle.

Either option would not only be a solid way to bring mutants into a universe that has been devoid of them from the start, but also creates a narrative that could introduce the Young Avengers, as well. Avengers: The Children’s Crusade was an excellent limited series by Heinberg and Cheung detailing the fallout from House of M. It heavily featured the team, as well as the original Avengers, and could be a cool way to bring everyone’s stories together.

I’m sure that far better writers than me could find more creative ways to bring these characters into the same world. However it happens, though, the Young Avengers should absolutely be the next superhero team that Marvel Studios focuses on. With a small, but very vocal minority doing their best to sabotage the movement to diversify the genre at every turn, this team would be yet another step forward for the MCU.

These trolls have attempted to ruin both Black Panther and Captain Marvel before they ever hit the screen. It’s up to the fans to show these real-life supervillains that comics are for everyone. Young Avengers assemble!

Jamie Gerber is a writer who can’t seem to quit her job at the comic shop. She adores all things pop culture and prefers spending time with her pets to hanging out with actual human beings. Jamie aspires to write about the things that she loves at a job that can support her massive Thai takeout addiction.