Goliath bird-eating spiders have a very particular set of skills. 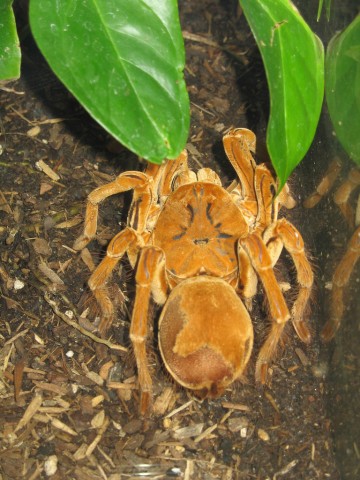 Puppy-sized spider is an eye-catching phrase, no? Goliath bird-eating spiders aren’t new, and they only weigh up to about 1/3 of a pound with legs that measure about a foot from end to end. So, we’re talking a newborn puppy here and not a spider that’s going to eat your cat, but the idea captured the focus of the Internet in a big way last week when entomologist Piotr Naskrecki took one as a sample for the Smithsonian. They didn’t like it one bit, and not just because of terrifyingly large spiders.

Naskrecki’s small blog started blowing up with the attention of people who catch spiders in their houses and “liberate” them (not necessarily humane, by the way), who were none too happy that he’d killed one of the relatively rare animals for science. He even received threats on his own life. Joke’s on them, because those of us who haven’t suppressed our very natural “kill it with fire” reaction to giant spiders will be the lone survivors when its family comes looking for it Taken-style.

In light of the outrage, Naskrecki’s replaced the original blog post about the amazing creatures with his own thoughts about people who don’t understand how science works. He wr0te (emphasis mine):

You see, while talking to a reporter I explained that one of the specimens I describe in the blog had been collected and placed in a museum. This, combined with my comment of having seen this species only a handful of times, triggered a tsunami of self-righteous outrage at my murderous act which, according to the most vocal individuals, is bound to drive this species to extinction. In fact, I really fear for the Smithsonian Institution, this nation’s preeminent natural history collection. If a single spider collected by a scientist causes such an outrage then, surely, the 126 million specimens in its holdings will warrant burning it to the ground and crucifying all scientists working there.

Sometimes science involves taking samples back to study, and sometimes that involves the death of tiny critters. Man, the people who complained about this are going to be really mad when they find out how many bugs I killed for my 9th grade biology project—especially the ones I had to kill a second time after I didn’t do it right and they got loose in my house in the great wasp incident of 1999.

Don’t worry, the goliath tarantulas aren’t endangered, which would cast a different light on the situation. No, as Naskrecki was just doing what scientists do, the spiders are going to do just fine and keep doing what giant spiders do: scaring the Hell out of us.

(via io9, image via nikoretro)