The good and the bad. 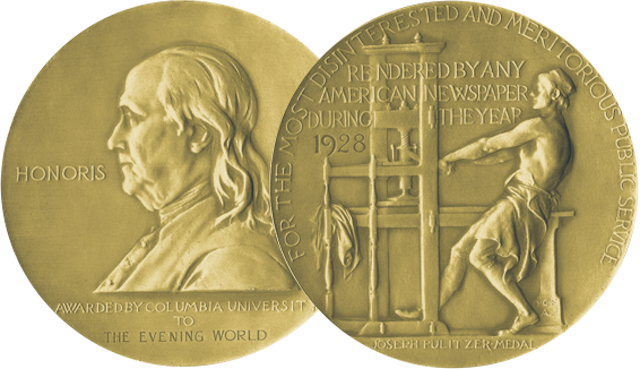 The 2017 Pulitzer Prize winners were announced this week. As usual, the awards were largely given to works that reflect and push the social and political issues most pressing on American life. This year’s awards honored coverage of subjects like Big Pharma, the 2008 financial crisis, and eviction abuse.

These aren’t unusual subjects if you look at past winners. But there was one subject that was new to the issues covered in the winning works: Donald Trump. How does the election of Trump play into the picture of American struggles and triumphs the Pulitzer board strives to paint? I don’t think we have to do too much digging to see how they feel about life in Trump’s America.

For starters, the award for National Reporting went to David A. Fahrenthold of the Washington Post for his “persistent reporting that created a model for transparent journalism in political campaign coverage while casting doubt on Donald Trump’s assertions of generosity toward charities.” Fahrenthold was the reporter who first broke Trump’s Access Hollywood tape; he spent months investigating Trump’s fraudulent philanthropy; he was also referred to by Trump himself as a “nasty guy,” which must be a nice badge of honor.

Next, the award for International Reporting went to the staff of the “failing” New York Times, specifically for coverage of “Vladimir Putin’s efforts to project Russia’s power abroad, revealing techniques that included assassination, online harassment and the planting of incriminating evidence on opponents.” While Trump wasn’t the direct focus of these articles, the Times did write a number of pieces on Russia’s DNC hacking and how the government uses  alternative facts to succeed. The work is decidedly not #TeamPutin, which, of course, means it’s not Team Trump either.

The award for Editorial Cartooning went to Jim Morin of the Miami Herald, who … well, let’s just say he doesn’t exactly try to hide his opinions on Trump.

What a spoiled brat he is. What a vile, rude, dishonest and contemptible fool. #morintoon #DonaldTrump #Election2016 #debate pic.twitter.com/pjjZCZcRy2

FBI throws the election. Electoral College BS prevails while Hillary wins popular vote. System is rigged against us, not them #morintoon pic.twitter.com/GuCpsvKJiu

The apparent outlier here is The Wall Street Journal’s Peggy Noonan, who won the award for Commentary. Noonan is a conservative columnist, a former Ronald Reagan speechwriter, and someone who, if you ask her, totally understands diversity and has a ton of Hispanic friends (who happen to work the counter at her local deli), all of whom just love Trump.

A lot of people are not feeling this award.

Donald Trump is president and Peggy Noonan has a pulitzer

congratulations to all the winners except peggy noonan!

Really fine Pulitzer wins this year except for the inexplicable Peggy Noonan.

Folks, few Beltway voices have contributed more to the cultural “othering” of Barack Obama than Peggy Noonan. @PulitzerPrize is disgraced.

(Here’s a really great piece on that “othering,” if you’re interested, which I hope you are.)

Noonan’s pieces have a friendly, casual, afternoon tea sort of trademark tone. She’s not exactly pro-Trump, but she is very soft on him, and far softer on his supporters. If you’re looking to point a finger at everyone whose work supported a normalized view of Donald Trump and the corruption and racism so deftly displayed by those other three winners up there, Noonan would be right near the top of that list. As she bemoans her “pained and crazy country,” insisting that Trump voters are not to be held accountable for their President, that America really is great again or some such nonsense, she is aggressively quaint in her complicity.

And I suppose that does support the picture of American life as it existed over this last year. There is still a good amount of pandering to Trump, but more and more, he’s easier to call out, while media outlets still don’t know how to talk about his supporters. They don’t want to risk alienating them more through criticizing the values they voted for, and so treat these Trumpians like a sensitive bomb needing diffusing. Peggy Noonan tells them they’re not bad people, they’re idealists! And now they deserve to be coddled, because how unjust it would be to make them feel like just by supporting an unqualified, unhinged anti-Semite, racist, and misogynist with an ego and a temper he makes no attempt to quell, that that was somehow reflective of their own values?

So sure, Pulitzers, take down Trump. But did you have to choose the ironic pick for Commentary?

Work from each of this year’s winners is available to peruse for free at Pulitzer.org. It’s a (mostly) stellar lineup.