In December, Mark Fiore submitted an app to Apple that would allow his fans to view his political animated cartoons.  Apple rejected his app, saying that his cartoons were “objectionable content.”

Well, on Monday, Fiore’s work was awarded the first Pulitzer Prize for Editorial Cartooning to go to an online only cartoon.  Apple is now asking him to resubmit his app.

The clause of the iPhone Developer Program Licence Agreement that Apple said he was in violation of was this one:

Applications may be rejected if they contain content or materials of any kind (text, graphics, images, photographs, sounds, etc.) that in Apple’s reasonable judgement may be found objectionable, for example, materials that may be considered obscene, pornographic, or defamatory. 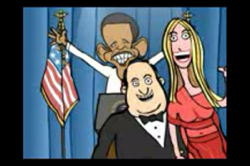 According to the Nieman Journalism Lab, Apple “attached screenshots of the offending material, including an image depicting the White House gate crashers interrupting an Obama speech. Two other grabs include images referencing torture, Balloon Boy, and various political issues.”

So… satire, in Apple’s view, can be considered defamation?  But once it’s Pulitzer sanctioned satire, well.

Hopefully, next time, it won’t take an internationally recognized arts award to force them to reassess.