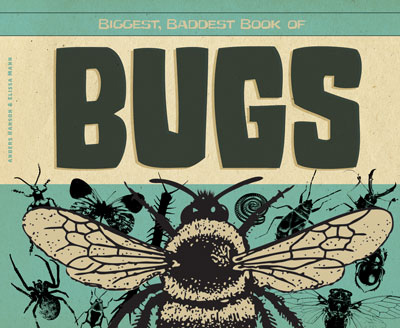 Imagine this: you are a child from California who loves the crap out of some bugs—so much so that, at the tender age of six, you know what the word “entomologist” means. One day you find the coolest book ever about insects, and it’s only after you finish reading it that you turn it over and find it’s part of a series of books “for boys.” You are a girl. This makes you unhappy.

That’s what happened to Parker Dains of Milpitas, California, when she read Biggest, Baddest Book of Bugs, published by an imprint of ABDO Publishing as part of a series called Biggest, Baddest Books for Boys. Other books in the series include Beasts, Monsters, Dinosaurs, Pirates, and Warriors. Yup, because there have never been girl dinosaurs in history. Not even clever ones.

Dains, however, is absolutely a clever girl, because rather than internalize something terrible about how her interests are not conducive to her gender or vice versa, she instead decided to enlist the help of her parents in writing a letter to ABDO Publishing. It read as follows:

ABDO Publishing took Dains’ words to heart and quickly responded to her letter, telling her that the next books in their series would no longer contain the words “For Boys” in the title and would instead simply be known as the Biggest Baddest Books.

“You brought up a very good point: there should certainly be a ‘Biggest, Baddest Books for Boys’ for everyone. After all, girls can like ‘boy’ things too!” their response letter read. Last month the publishing house also sent Dains and her family special advance copies of the new series, which contain books about ghosts, storms, caves, flight, and space. These new titles will be available for purchase in January 2015.

It’s worth pointing out that women read fiction at a much higher rate than men do, and both publishers and educators often have a much harder time attracting young boys to reading, which can affect their academic success—so it might concern some people to see a book which was once being marketed towards boys change its colors so easily. However, the UK-based Let Books Be Books campaign believes gendered marketing causes more problems than it solves by restricting children at a very early age, and asks publishers not to label books as either for boys or for girls.

“Do we really want to tell children that certain stories are off-limits? That robots, trucks and adventure are strictly for the boys, and butterflies, cakes and friendship are girls-only themes?” their FAQ reads. “Separating stories and activities in this way sends harmful messages to children that only certain interests are acceptable, and also creates an unrealistic division between boys and girls. There is far more variety of personality and interests among boys or girls than there is between them.”

“What of the reluctant reading boy, who is reluctant because he would prefer family or pony stories to snot and football, but daren’t pick up a ‘pink book’?” the FAQ also notes.

In the meantime, Parker Dains has certainly been inspired by her success in lobbying against gender labels, and plans to be an “advice-giver” or an artist when she grows up. “I think it was so awesome and I even got a letter,” she told the Milpitas Post, while apparently bouncing on a trampoline. “They took my advice. I am going to be the best advice giver.”