“Well, I guess you don't know everything about women yet.” -Princess Leia 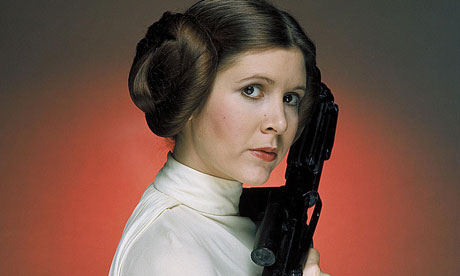 This month I am honored to focus on one of the most iconic female role models of all time: Princess Leia, from Star Wars.

Leia was born as Leia Amidala Skywalker, and when her mother died at birth, Leia was adopted by Bail and Breha Organa of Alderaan. Her new adoptive name became Leia Organa.

Leia was purposely separated from her twin brother, Luke Skywalker, so the evil empire that orchestrated genocide on the Jedi would have less of a chance to find out about the children. In fact, when Luke and Leia’s mother, Padmé, was buried on her home planet of Naboo, her body was arranged to make it look like she was still pregnant in order to hide the existence of her children from the Empire.

From an early age, Leia demonstrated her propensity both for rebellion and for the Force. One of the video games demonstrates Leia staging a strike over being given bottled juice instead of fresh juice at her school. She acted out against being pampered and groomed, as she enjoyed more gender-neutral roles and activities.

When she started learning about politics (around the time she hit puberty), Leia was a natural. She was well-mannered and although she had a sharp tongue, she was also a great negotiator. Fearless and ambitious, not unlike her biological father, Leia became the youngest Senator ever elected at the age of 18.

When the war began, Leia was captured on a number of occasions, though never without a struggle. She refused to surrender when surrounded, did not divulge information when tortured, and was unafraid to die for what she believed in. Leia eventually got a hold of the plans of the Death Star. When the initial Star Wars movie opened, she had just been captured by the scariest being in the universe: Darth Vader. Vader interrogated her to try to get the plans back and find out the location of the Rebel Base. 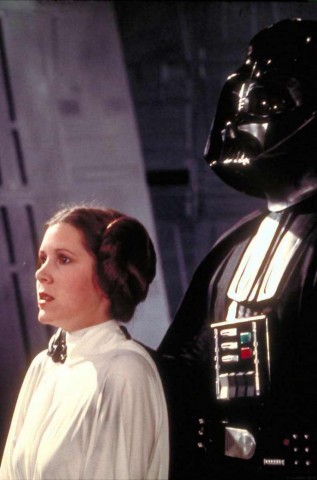 Not knowing that he was actually her father, Leia demonstrated what some might consider a rather father-daughter-like emotion toward him. Specifically, instead of showing fear, Leia appears to experience anger and disgust. She does not give in to his threats or torture. It’s only when Grand Moff Tarkin threatens to destroy her home planet of Alderaan that Leia caves. Sort of. She states that the Base is located on Dantooine, a distal planet. The truth is that Dantooine used to house a Rebel Base, but it is now empty.

Tarkin, unfortunately, does not hold up his end of the bargain, orders the destruction of Alderaan anyway, and sends his people to investigate Dantooine. In a brief moment, Leia loses nearly everyone she cares about.

Such a devastating loss occurring immediately after she was severely tortured could have easily traumatized Leia. It would not have been surprising if after what after what she endured, Leia ended up suffering from complicated grief or post-traumatic stress disorder, but she does not. As soon as Luke and Han are able to break Leia out of her imprisonment, she springs to action. Armed with a gun and her quick wit, she readily fights off the Stromtroopers along with her rescuers.

Leia demonstrates what it’s like to be a brave warrior. She stops at nothing for what she believes in and risks her life on a number of occasions for the people that she cares about. Even being kidnapped, tortured again, and injured does not stop her as she keeps fighting (for example in Episode 6). She does not give up on her mission and is guided by her goals, as well as the Force. In at least in some versions of the extended universe, she eventually becomes a Jedi.

What were some of the protective factors that helped Leia overcome her painful experiences? More than anything, it was her ability to follow her sense of purpose—destroying the Empire—that gave her something to live, fight, and hope for. When war survivors are able to develop a sense of meaning from their tragedy, they are less likely to struggle from depression or PTSD. Leia’s dedication to her mission, as well as to helping and protecting her friends, may have helped her better cope with what happened.

So what can we learn from Princess Leia?

Until next time, and may the Force be with you!

Janina Scarlet, PhD, is a Licensed Clinical Psychologist, a scientist, and a full time geek. She uses Superhero Therapy to help patients with anxiety, depression, chronic pain, and PTSD at the Center for Stress and Anxiety Management and Sharp Memorial Hospital and is also a professor at Alliant International University, San Diego. Dr. Scarlet is the author of “Superhero Therapy” and has authored chapters in the Sterling Publishing works “The Walking Dead Psychology,” “Star Wars Psychology,” “Star Trek Psychology,” and “Game of Thrones Psychology.” She can be reached via her website at www.superhero-therapy.com or on Twitter: @shadowquill.