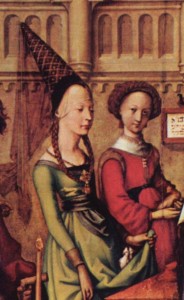 You know, the ones that you made out of construction paper, tape, and a bit of whatever was left over from the trip to the fabric store for the princes party you were invited to when you were seven.

The ones inspired by one brought back to Europe by Marco Polo, who’d borrowed it from a Mongol queen. Since Mongol dress was more or less gender neutral, the very vertical hats (sometimes five to seven feet) helped differentiate the male and female silhouette from a distance. But I don’t want to give it all away; you can read more at Medieval POC.