We Do What We Must Because We Can 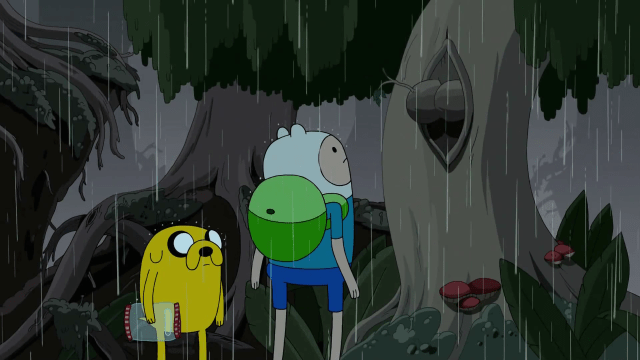 There is always a butt.

I started watching Adventure Time about a year ago, when my brother recommended it to me with the explanation that it was like someone made a show out of the inner workings of my brain. Damned if he wasn’t right. Adventure Time is cute, never ashamed to embrace the adorable, but it also has a persistent darkness. The weird matrix of sincere emotion, cuteness, and darkness twine around each other throughout the show, but culminate in the character of Princess Bonnibel Bubblegum. She looks sweet (pun totally intended), with her pink skin and hair, preference for pink and purple clothing, and I think that her kind and heroic impulses are sincere – she reads to candy orphans, battles to reclaim pieces of radiation-soaked land for the Candy Kingdom, and hangs out with her friends on movie night. But (and in Adventure Time, there is always a butt) – there is a side to this girl that is more than qualified to accept a position of leadership within Aperture Laboratories, Inc. Don’t read this as a diss on PB – she is actually my favorite character, and it is her complexity that fascinates me. She fully understands the burden of leadership and believes that she has become exactly who she needs to be to be an effective leader. Princess Bubblegum wants to be liked, but at the end of the day (or millenium or whatever …) she’s willing to be the bad guy when the greater good calls for it.

Let’s tally up some of PB’s darker moments:

1.) Reanimation of Dead Subjects (Scone of the Dead?): in Slumber Party Panic, she is shown to be working on a serum to reanimate dead candy people. Nope, we don’t let sleeping candy persons lie, we bring them back to life with little thought to how they might feel about that. Let alone their loved ones. This little guy sums it up pretty well: 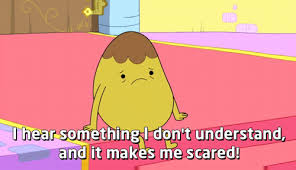 2.) Lemongrab. Jesus.: PB created Lemongrab, and he turned out … wrong. Irritable, lonely, easily agitated, and lacking in empathy, the Earl of Lemongrab is truly tragic. When he proved impossible to live with and unable to bear the company of others for long, he was given rule over Castle Lemongrab. When he rides to the Candy Kingdom to demand subjects to rule, PB first gives him some of her own less productive citizens. “Here are some delinquent youths. Have at.” When this also proves untenable, she makes him a clone of himself to chill with. Slippery slope much? Yes. A slippery slope to despotic cannibalism. 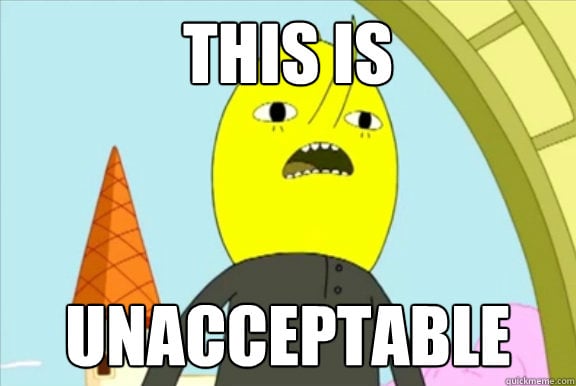 3.) Goliad and Stormo: Eternal Psychic Battle Deathmatch of Eternity. Eternally. : “So, I’m not going to live forever. The science just isn’t there yet.” In the episode Goliad, PB creates Goliad to be her successor. The pink Sphynx lacks the moral character necessary to not become a tyrant, and so she yoinks some of Finn’s DNA and creates Stormo, a griffin who immediately, heroically engages Goliad in an eternal psychic battle. Forever. I have weird feelings about the possible prophetic nature of this scenario. I love PB’s character because of her moral ambiguity, loyalty to friends, and strength of rulership. Her ability to make the hard decisions and take responsibility to do what needs doing for survival is impressive. If Goliad is made of PB’s DNA and Stormo is made from Finn’s, I feel like their eternal battle is either a metaphor for Finn and Bubblegum’s friendship and how they affect and temper one another, or some terrible vision of a future in which they are on opposite sides. 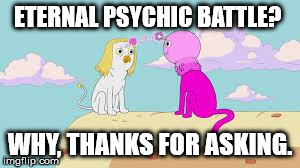 4.) BonnibelBot – “I made you a clonebot of me. Enjoy her.” : It was wrong when the Douchebag Club used the BuffyBot, but PB made her poor, infatuated, long-suffering suitor a clonebot-thing of herself to date. I’m just not sure how to feel about that. 5.) Scream, Ice King!: In What Have You Done?, The Ice King has caused an outbreak of Freezer Burn Flu in the Candy Kingdom. Granted, he’s being a butt, but he’s got actual mental health issues and isn’t entirely responsible for his own behavior, and also granted that PB has to look out for her peeps. That said, she’s totally willing to imprison and torture poor old Simon to get the necessary scream to cure the flu. Oh, dang, you guys. PB is hardcore when she needs to be, and she cares so hard about her candy peeps, it’s hard to be mad at her, especially when she feels badly about it later. We all make mistakes, Princess. And … Ice King is unlikely to remember this later … Aw, Simon. Dammit. 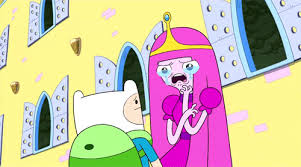 6.) Ricardio Death Match. You think you’re my intellectual equal? Your sinews are exposed, loser.
In Lady and Peebles, Ricardio shows his creepy face for the second time, having built a body for himself in an attempt to impress Princess Bubblegum. To protect Finn, Jake, and Lady, PB agrees to marry Ricardio if he can defeat her in hand-to-hand combat. That’s my girl! The fight is surprisingly brutal. She pretty much stomps him and tears him apart while criticizing his science. She says, “You think we’re intellectual equals? It only took me seconds to catch you off your guard! And this body you designed is self-congratulatory garbage. See, I know a thing or two about building a body out of biomass, and you don’t leave your heart exposed!” Ricardio says, “I just wanted to impress you,” and my girl PB simply replies, “You didn’t.” Lights out for Ricardio. Slow clap for science and Combat Princess Bubblegum, who then carries her friends home and cares for them. I love Badass, Outraged Academic PB. I want an action figure of her stamping out shoddy work. 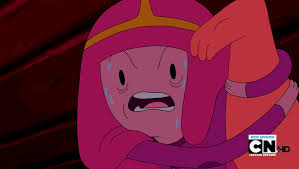 Your science is shoddy. You suck, Ricardio!

7.) James. I’ll make another: In James, Princess Bubblegum, Finn, and Jake are on an exploration mission to collect samples. James, a Candy Kingdom resident, is acting as PB’s assistant. Throughout the episode, Finn and Jake are sure that James is sabotaging their efforts to escape from the radioactive mutants (Holy Crap! The scary zombie-things from Simon and Marcy are still here!). It becomes apparent that the only chance for escape is to sacrifice one of them for the group’s safety. Finn, his heroic nature surfacing, volunteers. Princess Bubblegum unceremoniously knocks Finn and Jake out with a wrench. When Finn comes to, he is told that it was never James who sabotaged their plans to escape. It was PB, whose mad science brain had examined all possible escape plans and determined that none of them would work. James gave up a piece of his candy biomass to PB and sacrificed himself to the radioactive zombies to save them all. She could make another James, but could not make another Finn, and so she acted accordingly.

She did what she had to do.

8.) Remove and reattach. Repeat.: – Remember the poor little critters in The Lich she is randomly cutting up and sticking together. Did she make them? Maybe. Is she killing them? Possibly. Does this bother her? Doesn’t seem to. Yikes. 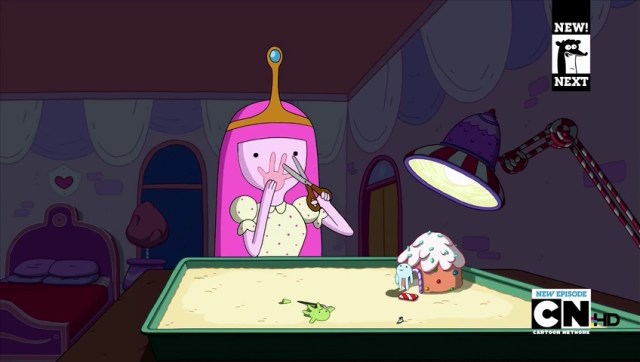 9.) Flame Princess – Contain your nuclear daughter, or I’ll do it for you. Flame Princess has an actual reason to be pissed at PB. It was Princess Bubblegum who first recognized Flame Princess’s potential danger to the world, and returned her to the Flame Kingdom, where she was imprisoned until her teenage years. Yeah, PB was right, but FP is rightfully upset. Well, it turns out that poor old half-baked Cinnamon Bun got himself fully cooked in the Flame Kingdom. It seems fitting that FP should have the loyalty of PB’s former retainer. 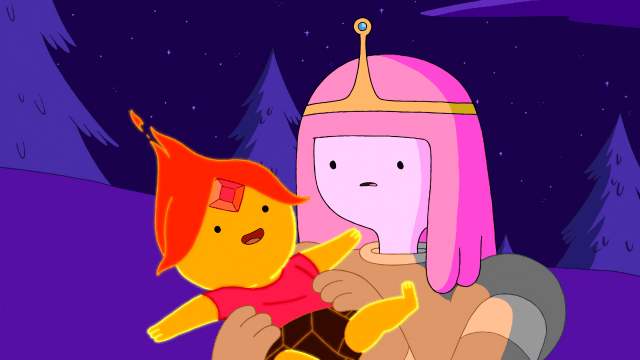 All right, cutie. Into the lantern!

10.) Skeletons in the closet – In Ricardio the Heart Guy, there are skeletons shackled to the wall in a background scene. Now, how did those get there? Princess Bubblegum has been ruling for 800+ years … well, I’m just going to assume that they were Very Bad People. Or, perhaps they’re science skeletons. For science. Science the field, not Science the Rat. 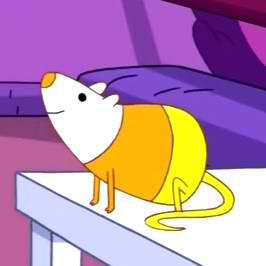 Princess Bubblegum is a bastion of Science in a world that is gaga for magic. In Adventure Time, magic is real. Often too real, and wielded by those who have no compunction about turning a kid into a giant foot (Magic Man), stealing emotion contained in precious objects (Maja), and transforming people arbitrarily for imagined insults (the garden witch who messed with Jake.) Science (nuclear science, that is) may have turned our world into the Land of Ooo, but it turns out that the denizens of Ooo aren’t any more responsible with magic than their human predecessors were with science. PB refuses to let the scales tip too far in one direction, insistent that magic is just science wielded by those who don’t understand what they’re doing. Scientist and science fiction author Arthur C. Clarke’s famous quote, “Any sufficiently advanced technology is indistinguishable from magic,” applies well here. The Land of Ooo’s division between science and “magic” is very reminiscent of the science/religion dichotomy that is often discussed in our own society. A quick visit to Wizard City confirms that magic is no way to govern a populace, as the laws are arbitrary and overly punitive for seemingly minor offenses. It seems, after all, that PB is not the only one doing what she must because she can. Both sides are doing a lot of that in the Land of Ooo.