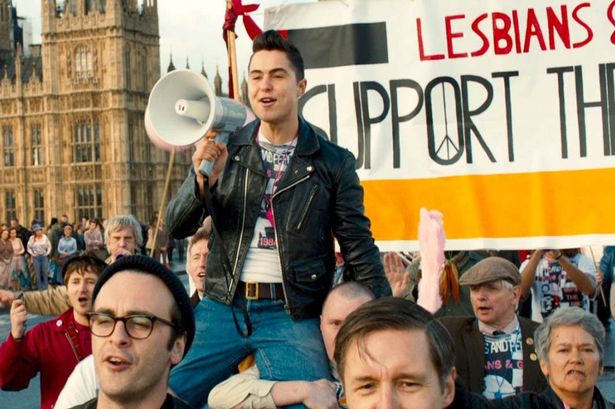 Over the weekend, the Pride took Best English Film at the British Independent Film Awards, beating heavier films such as 71, Calvary, Mr. Turner, and The Imitation Game (to which it lost at TIFF).  In a surprise move from the Hollywood Foreign Press Association, Pride has now also been nominated for a Golden Globe in Comedy.

Pride tells the story the Welsh coal miners strike that received vocal and financial assistance from a LGBTQ group called “LGSM” (Lesbians and Gays Support the Miners) in the midst of the AIDS crisis. The film stars an ensemble of top actors, including Bill Nighy, Dominic West, Paddy Considine, Andrew Scott, George MacKay, and Imelda Staunton, who also picked up a BIFA for best Supporting Actress. Stephen Bersford, writer for the highly-praised film (currently sitting at 94% of Rotten Tomatoes), sat down with us to talk about why he brought this forgotten story of acceptance and activism to the screen.

Lesley Coffin (TMS): This is a movie which has the potential of reaching a broad audience, making them more aware of the issue of supporting gay rights.

Bersford: That was the idea and we hope that is the case. I feel there are a lot of stories about gay people which are usually focused on a very vocal minority, those against LGBT rights for religious or political reason, so that’s the story we are told most. But there is another story of ordinary people who simply haven’t had a gay person in their own life, but given the opportunity they just get on with it [and accept it]. And the fact that they do get on with it makes that a much bigger story then that vocal minority. But that seems less dramatic, because of the lack of conflict. But this story, of the miners and the LGBT group coming together, was dramatic, and it was a story of ordinary people coming together and it really honors the gay people who supported the miners, but also those heterosexual people who decide supporting them was the decent thing to do. It is a celebration of that.

TMS: Even the characters initially against having the LGBT group’s support were far more nuanced than a lot of characters we see in other films. And once they were given a bit of time and made a personal connection, they became very accepting, and even protective.

Bersford: Well, I think that is common. You’ll meet people who say, my 82-year-old grandmother doesn’t have a problem with it, or my neighbors are lesbians and no one should have a problem with it. And the other thing I loved about this story was the fact that it advocates for the idea that you do not have to be gay to support LGBT rights. And likewise, you do not have to be black to support rights for black people, or be a woman to support women’s rights. In fact, the onus is on you to reach out to all those people, because these fights of minorities ultimately come down to human rights.

TMS: There are a couple of comments in the movie from women in the film, asking “What about us? Where do we fit into all this.” The women are supporting the miners and LGBT rights, but they don’t have the rights of men either.

Bersford: And that is an interesting thing that really did happen in the story of the strike. What you see in the story of Jessica Gunning’s character Sian James, who goes from being a housewife, bright but with very little of her own, [to being] a member of parliament. And the strike did that for women like her, and meeting the gay people did that for her specifically. It changed perspectives in such an important way. And in a lot of ways, the women were the winners of the strike, because the men saw it as the end of their livelihood, whereas the women just went on, as women usually do. It is interesting that women are more likely to accept new ideas. They are adaptable because from the minute they are born, they have to adapt. Men are far more likely to attach themselves to a delusion. I think women might be a bit smarter in that respect, but they are also able to survive trauma more often then men. Women usually come out of war better.

TMS: There are a lot of great characters, but I do want to ask you about Gwen (Menna Trussler), the older woman who becomes the mother hen to a group of lesbians. You might expect her, being the oldest, to be the most conservative person in the movie, and yet she has no prejudice towards them. When you create a character like that, or a character as accepting as Imelda Staunton’s, what does it add to the story?

Bersford: Well, Gwen is invented, whereas Imelda’s Hefina was based on a real person, known as being a great union organizer, very close to how she is played in the film. What I wanted to do with Gwen was what I also wanted to do with Cliff [Bill Nighy]. I wanted an older lady, who was intellectually curious, hasn’t made her mind up about anything, and she is interested in new ideas, and lesbians are new to her. And once she gets her head around everything, she has no problem. And I think there are a lot of older people like that, despite the stereotyping of old people being conservative. I was having breakfast next to an old couple, maybe in their 80s, and he was reading the New York Times, and she was looking at the back and said “What is that about Eminem?” And they had a whole conversation about Eminem. There was also something about older people, in that they will ask direct questions. Which English people don’t tend to do, but a Welsh person will. While we were filming, I was asked “Are you the director?” and I said, “No, I’m the writer.” And she just came out and asked, “Oh, are you rich?” That is question no English person would ask, but she was just curious. So that thing of having Gwen ask all these direct questions to lesbians, I love that about older, Welsh women.

TMS: The movie seems seems especially relevant right now, despite being set 30 years ago, especially with the fight for marriage equality.

Bersford: I wanted the movie to not just be for LGBT audiences or to play in cities, but also celebrate ordinary heterosexuals who embrace and ultimately supported LGBT rights. There was no point in making this movie then if it wasn’t a big and funny enough to reach those people in smaller cities and towns too. And it is a lost story that was important to tell. Because there is a lesson that if you extend a hand of friendship to another group, there is power in numbers. But there is another lesson when talking about the new wave of activism, in that in 1984, was that LGSM showed up. They knocked on the door and said, here we are to support you. There was a wonderful article someone wrote in the UK that said “prejudice cannot survive proximity.” So when they turned up and offered to help, the miners couldn’t resist them. But a lot of the activism we do now is virtual. We all join a group, but they don’t all show up. So there is a powerful message for young people that when you all get together things happen in a different way.

Pride is currently available on VOD and in select theaters nationwide.