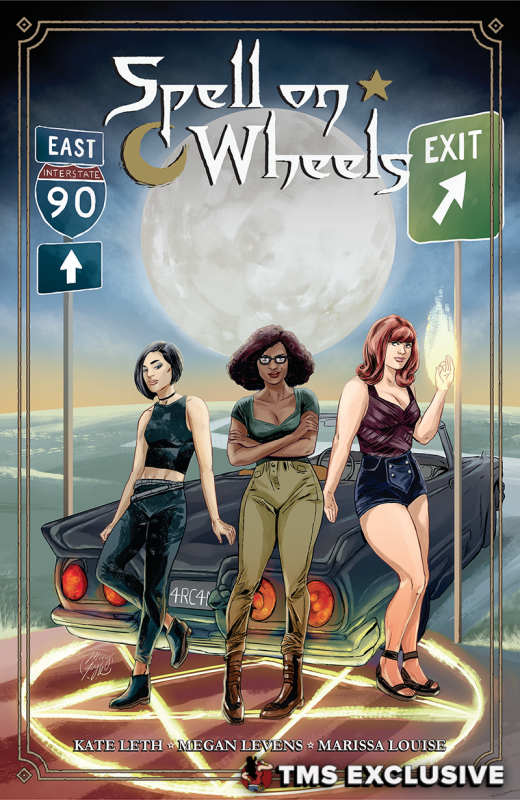 Hey, folks! We’re super excited to share with you today an exclusive preview of Spell on Wheels, a brand new comic from Kate Leth, Megan Levens, and Marissa Louise. It’s about the three witches who go on a road trip to take their magical items back from a dark magical force. The comic has some solid The Craft, Practical Magic, Buffy, and Charmed vibes. What’s not to like?

In addition to this quick preview, we’re sharing our chat with Leth about how this comic came about, and a little bit about the inspirations behind the rad, witchy crew.

You can find the full press release below the preview and interview. Check it! 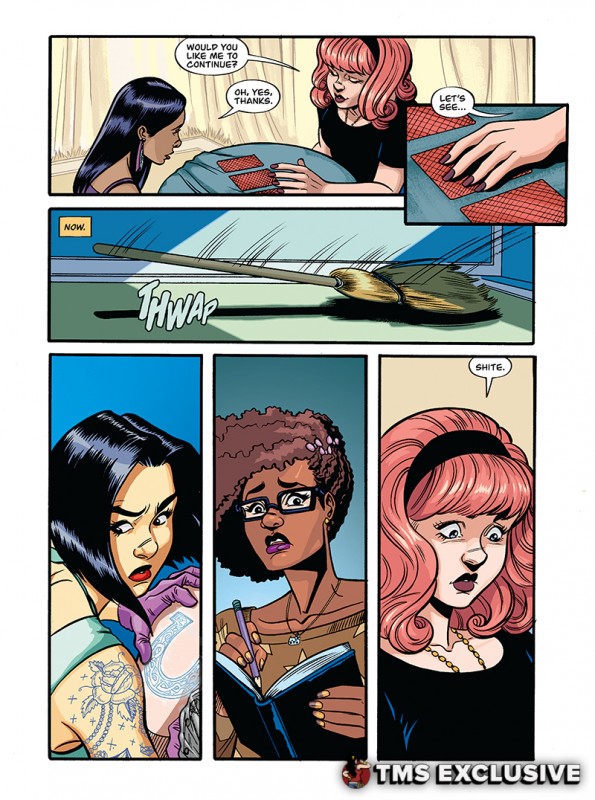 Jessica Lachenal (TMS): I’m curious about how your creative process worked for Spell on Wheels. How did the idea for this comic come about?

Kate Leth: Strangely enough, this all came from a tweet I made about a year and a half ago. I was fancasting a Witch Revenge movie, musing how I miss all the witch-themed movies of the ’90s, and the ball just kept rolling. I love The Craft and Practical Magic as well as shows like Buffy and Charmed, and wanted to build a story in that vein, but set clearly in the 2010s. I’ve also wanted to do a road trip story for ages. I developed the character designs with Kendra Wells, who is incredible, and built the rest of it with Dark Horse! It’s been a long time coming, and I’m so excited to finally get to share it.

TMS: Did you work with Megan Levens and Marissa Louise from the very start, or did they come in later in the development process?

Leth: Megan was brought on almost right away when the story got approved, and Marissa shortly after. I was hoping for an all-girl team on this one, ha! It was almost too perfect to have Megan, who drew the Buffy comics, working on this project. I couldn’t be happier with our team.

TMS: On that, what was it like working with them? How closely did you all share in the creative vision for Spell on Wheels?

Leth: We adapted and evolved the original character designs, working to Megan’s strengths, and I love how they ended up. There’s a lot of back and forth on this book, a lot of inspiration – we have a pinterest board just full of fashion and art – which was Marissa’s idea, I believe. It’s been hugely helpful.

TMS: I got to take a look at one page of the comic, and it has a notably small bit of dialogue on it. Even with so few words being said, I found myself very much wanting to learn so much more about these characters. Is there anything you can tell us about them? Who they are, what they’re like… ?

Leth: I can tell you that Claire, Andy and Jolene are the last three pure-blood witches of their generation. They’ve been brought together by their parents, and by fate, to try and find others who have the potential to become magic-users like them… Which not everyone agrees with. Claire is a tall Canadian who has visions, senses and skills with tarot; Jolene is a tattoo artist and technopath, who infuses her tattoos with blessings (or curses); Andy is the youngest, and nerdiest, specializing in potions and spellcraft.

TMS: You’ve got a fairly diverse trio up front and center, and I’m super excited about that! How important was it to you that the main cast be as diverse as they are?

Leth: It’s always important to me. That’s one thing about those ’90s movies and shows – they weren’t always the most diverse. We’re just trying to portray a better reflection of the real world, even in a magical story.

TMS: What would you say is the overall tone of the series? This might be me projecting (hoping?!) a bit, but I’m getting a kind ofThe Craft vibe.

Leth: Ha, well, yes! Think Buffy, The Craft, Supernatural. It’s three witches/best friends on a road trip in a stolen black Thunderbird getting revenge and solving a mystery… Or trying to, at least!

TMS: What are you most looking forward to doing in this comic? Any particular subjects, themes, tones?

Leth: Spell on Wheels is so very me, and I’ve been thrilled to be able to really do what I want with the stories and characters. Dark Horse hasn’t batted an eye at the queer content (Jolene is queer, and there’s an issue that focuses on other queer characters) and have supported us at every step. In between all the magic and mayhem are some very real issues, from manipulative ex-boyfriends to being sober at parties to crushing family expectations. It’s a fun and beautiful book, but the underlying themes are quite grounded.

TMS: Tattoo artist character: freaking rad. Sorry, I know that’s not a question, but just really wanted to say that.

Leth: Ha! Jolene is the best, and the character that appeared most fully-formed. She’s partially based off one of my favourite tattoo artists in the world, Kim-Anh Nguyen, who I’ve been following and fangirling over for years now, since she moved from drawing flash art to tattooing. If you don’t know her work, look it up. It’s incredible. She’s also definitely inspired by Yeha Leung, an artist and designer I love. Each of the witches has bits of different awesome ladies I admire all woven together.

Leth: I can tell you we’ve got variant covers coming in from Jen Bartel, Paulina Ganucheau, Ming Doyle and more, and they are incredible. If nothing else, this is one gorgeous book – I hope folks will dig the world we’ve built and maybe get a little catharsis watching a trio of sister-witches kick ass.

KATE LETH AND MEGAN LEVENS ARE SPELL ON WHEELS
Dark Horse Is Proud to Announce Magical New Series
MILWAUKIE, Ore., July 13, 2016 — Dark Horse is proud to announce a new original comic series, Spell on Wheels, written by Kate Leth (Adventure Time: Seeing Red, Patsy Walker, a.k.a. Hellcat!) with illustrations by Megan Levens (Buffy the Vampire Slayer Season 10, Madame Frankenstein) and a beautiful cover created by Ming Doyle (Girl Over Paris, Constantine: The Hellblazer). Spell on Wheels: Night of the Wand follows the adventure of three talented witches—Andy, Claire and Jolene — as they embark on a road trip to retrieve their stolen magical objects. The three witches must work together to retrieve their possessions, but are they strong enough to defeat the dark magical force behind the thievery?
The first issue of Spell on Wheels: Night of the Wand goes on sale October 19, 2016, with four subsequent issues published monthly.
Megan Levens and Kate Leth will attend the 2016 San Diego Comic-Con. The Spell on Wheels duo will host a signing on July 23, 2016, from 10 a.m. to 11 a.m. at the Dark Horse booth.

Keep your eye out for this one, friends.