Presidential Flip Flops: For the President Who Has Everything (Except Integrity)

I’m dead see you at my funeral pic.twitter.com/ZqVXgEyhTQ

Presenting the most genius thing to happen in footwear since clear platform shoes with goldfish in them. (Actually, those weren’t genius. I hear that when the fish died, there was no way to get them out. Scratch that.)

Using the slogan, “Going back on your word, one step at a time,” President Flip Flops makes hilarious fashion out of something that should be neither funny nor fashionable—a President of the United States who tweets his positions only to go back on those positions (also on Twitter).

Creator Sam the Cobra uses gallows humor to keep us all from crying about the fact that words don’t mean anything anymore, and our President is someone who can’t parse ideas longer than 140 characters. 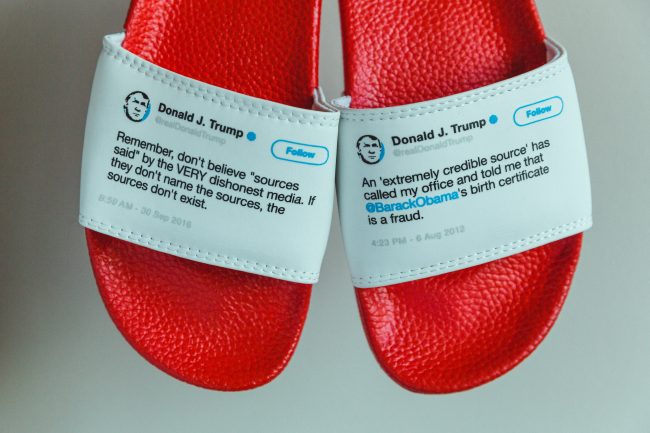 And yes, the flip-flops are actually on sale for $27.99 a pair at the President Flip-Flops website. They only have Men’s sizes, which is kind of a bummer, so if any ladies want a pair, you’ll have to convert the sizes. *sigh*

If any of you ends up getting these, we expect you to send us a photo of yourself (or someone you know) modeling these in creative, entertaining ways either in the comments below, or over at The Mary Sue’s Twitter. Get to it, people! Summer may be over, but it’s always time for flip-flops. Especially when they make a political statement!