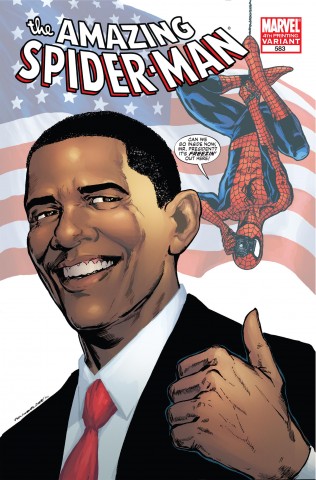 I love me some laid-back, no-more-campaigns-to-run, do-whatever-I-please, last-two-years-in-office president Barack Obama. Not that the president’s love for comics was ever a better kept secret than Superman’s real identity, but he’ll pretty much say anything these days, which has resulted in a recent mass email involving Spider-Man, Conan the Barbarian, and a direct comparison between his supporters and superheroes.

On Wednesday, an email went out from the President saying,

I grew up loving comic books. Back in the day, I was pretty into Conan the Barbarian and Spiderman.

Anyone who reads comics can tell you, every main character has an origin story—the fateful and usually unexpected sequence of events that made them who they are.

The same goes for grassroots organizers.

We’ll forgive his incorrect Spider-Man usage just this once.

The President went on to explain his own origin story and then ask others to share theirs and maybe win a chance to meet the nerd-in-chief in person:

Share the moment that inspired you to get involved in this work—when you do, you’ll be automatically entered for the chance to meet me in D.C. next month.

I’ll tell you why this is special for me. Knowing that folks like you are out there fighting alongside me, that we’re building something better together—that’s the same reason I drove across the country to become a community organizer.

I hope you’ll share your story of why you do what you do.

OFA could fly you and a guest out to Washington to meet me backstage.