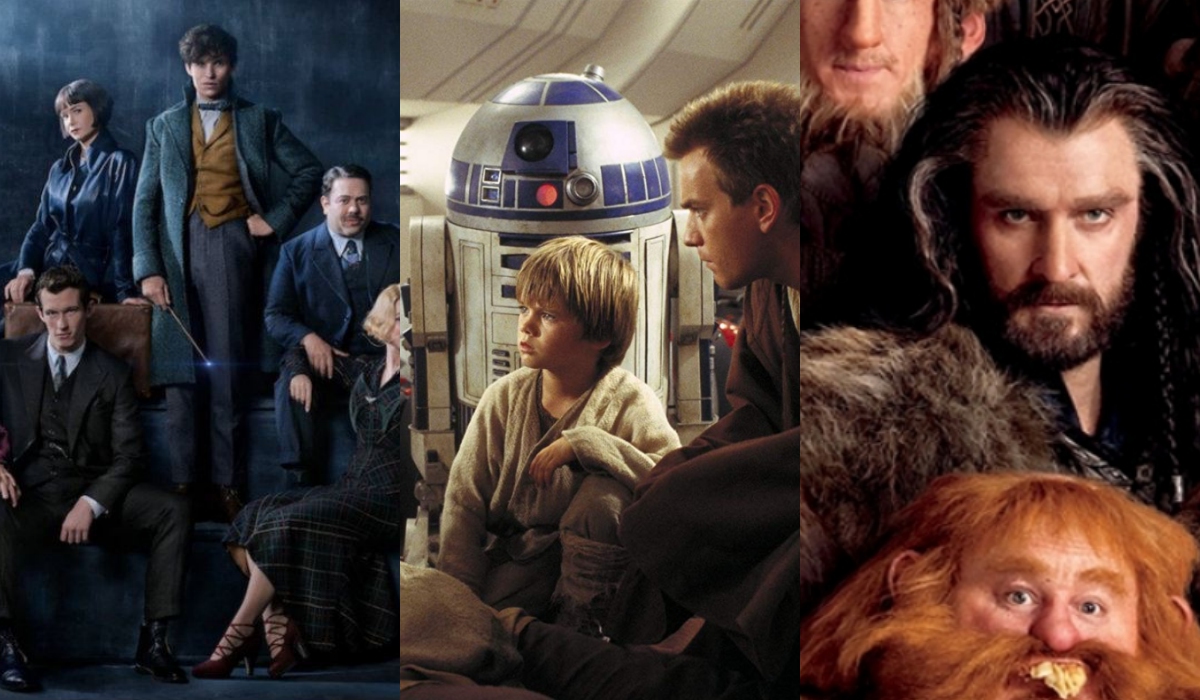 Franchises are hard to sustain. Once something iconic is over, how do you move forward continuing to milk the cash cow that has become a staple of your business? Prequels! Three of the biggest franchises of all time are Lord of the Rings, Harry Potter, and Star Wars, and besides having made a lot of money and having huge fandoms, they also all have terrible prequel franchises in common.

Crimes of Grindelwald is currently the hot prequel mistake of our time, and much like with Star Wars before it, it doesn’t only feel like a cash grab, but also a creator who doesn’t have editors in her corner saying, “Are you sure, sis?” Yet, it makes money, and as long as it continues to do that, the quality of the writing will not matter, nor will the half-baked moral lessons. It only matters that it can be milked into five movies, instead of just stopping at one.

The Hobbit made this mistake. While the original novel came before Lord of the Rings and is a children’s fantasy novel of a little over three hundred pages, Peter Jackson and the people over at Warner Bros. decided that it would make sense to make three long movies instead of, say … one good movie.

Ultimately, there is nothing inherently wrong with prequels, especially in universes like these, where there’s so much background material. The problem exists when everything is a callback to something else, where scenes are invented for the share grandeur of it all, but eventually fall apart when you poke it lightly or think just a little bit.

When I first saw Yoda and Dooku fight, was that the most epic thing I’d ever seen in my life? Yes. But when I think Attack of the Clones, it’s my least favorite film, because beyond showing the beginning of Anakin’s emotional downfall, there’s really nothing to it. That fight scene is epic, but it exists only to be a cool fight scne. It doesn’t matter what the characters represent; the movie is only concerned about the spectacle and getting those nostalgic moments.

The most exciting part of Grindelwald, for me, was seeing Hogwarts and catching a glimpse of young Professor McGonagall, except, as fans quickly realized, Professor McGonagall being a professor in  1927 is directly in conflict with what Rowling wrote in the books. In Order of the Phoenix, during her interrogation by the greatest evil of all, Umbridge, Minerva says she’s been working there since 1956.

That’s your own words, Rowling. Some have speculated that “well maybe it’s her mother,” so why would that be the case? Perhaps the voice, the hair, and the fact that they call her by name? Plus, we know that Professor McGonagall’s mother, Isobel, lived in a Muggle town with her husband, and was not a professor at Hogwarts, from Pottermore.

Like Anakin building C-3PO, it was done to make us so excited that we don’t stop and say … huh? Wait.

Legolas shows up in the second Hobbit movie and just takes over the series with his perfect wig and ability to just pwn everything, only because he’s a popular character and Orlando Bloom was available. Galadriel shows up in The Hobbit movies to be eerily beautiful and do nothing, and despite the Necromancer only being mentioned in The Hobbit, we have to make sure everyone knows that he’s Sauron, even though … everyone knows that because who the hell else would he be?

This isn’t to say that movies and prequels don’t ever work. Planet of the Apes‘ rebooted prequels are excellent. Wonder Woman, Temple of Doom, X-Men: First Class, and of course The Godfather II all rise above the sequel curse. However, those movies do not just exist to be prequels. Hell, Temple of Doom is only a prequel because George Lucas didn’t want more bad-guy Nazis.

Also, television and comics have been a great medium for prequels. Both Clone Wars and Rebels have been excellent additions to the Star Wars mythos, expanding upon characters and relationships that we didn’t get the time to see in movies.

I love backstory and learning more about characters, but there are multiple different avenues to do that, and sometimes, despite how tempting it may look, a five-movie series is not the best way—especially when the audience can pick up on some very clear timeline issues, and the interesting things, like the adventures of gay Dumbledore, are pushed to the side.

Crimes of Grindelwald has a sequence that’s just two back-to-back pieces of exposition about characters that will never mean anything to this franchise. There’s tension built around whether Dumbledore will fight Grindelwald, but we already know that, in 1945, Dumbledore will duel Grindelwald, gain the Elder Wand, and Grindelwald won’t die until Voldemort kills him in the ’90s.

We know all of this because we’ve read the books. That’s also how we know that Dumbledore was really a Transfiguration professor, but you know, I guess Defense Against the Dark Arts just seems sexier?

You want to do prequels? Sure, there are so many Harry Potter stories we haven’t seen, but maybe this one isn’t the one we needed?

What are some prequels you do enjoy?