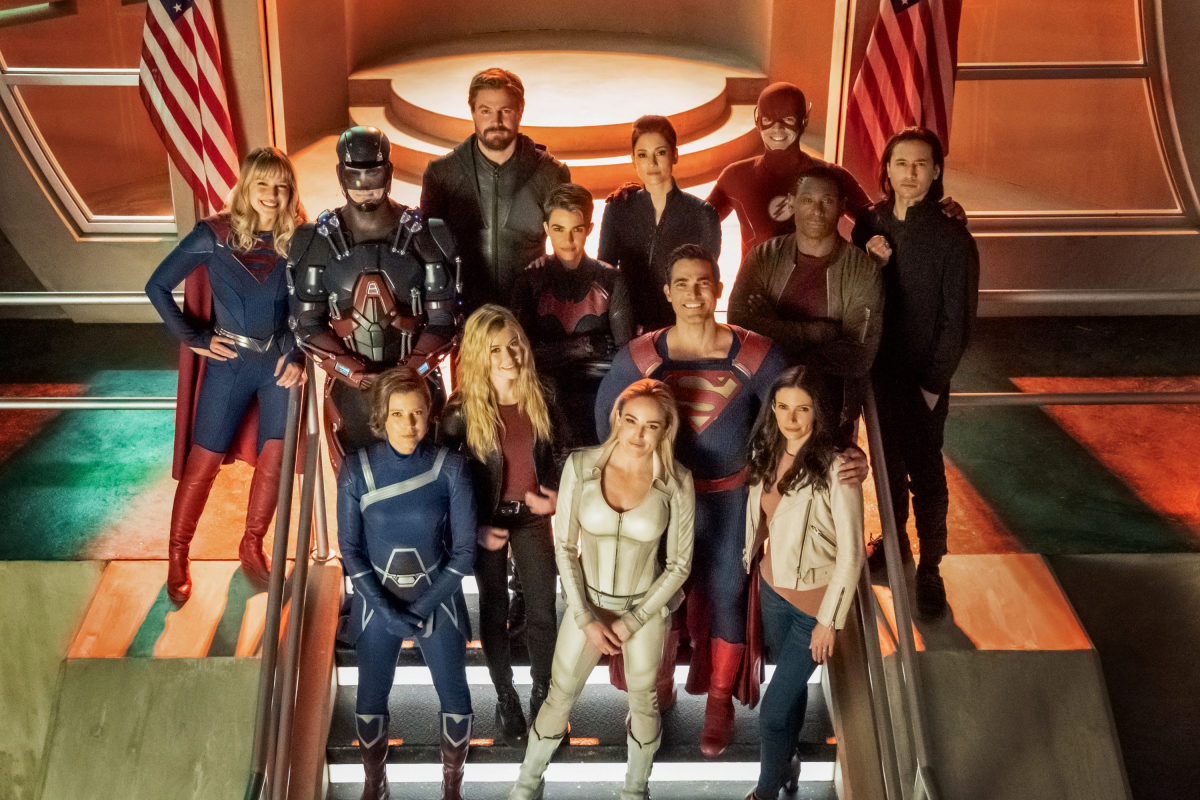 If you’re even partially aware of the geek world you know there’s a major event happening this month and next that’s not Star Wars. It’s the Arrowverse’s Crisis on Infinite Earths and five hour event on the CW that will begin Sunday December 8th and wrap up next January.

The event will change the Arrowverse forever, but I’m sure a crossover of this magnitude taking on such an iconic comic storyline will also attract viewers who aren’t caught up on all the Arroweverse shows…but never fear. We’ve got you covered and here’s all you need to know to prepare for the Crisis.

The Multiverse. It’s a thing.

The most important idea to grasp for casual viewers going into Crisis is that the “Infinite Earths” is very literal, and also the entire point of the peril. In The Arrowverse television continuity, there are many different realities. Arrow, The Flash, Legends of Tomorrow and Batwoman all take place in the same reality, Earth 1; but Supergirl takes place on Earth 38.

So far, these multiple earths have been a fertile ground for storytelling and a convenient way to explain why aliens are a huge part of Supergirl and why Kara doesn’t just show up all the time to clean up Barry and Oliver’s messes. Superman and Supergirl never came to Earth 1, so things are different there. Black Lightning takes place on yet another earth, but will also be part of the crossover. 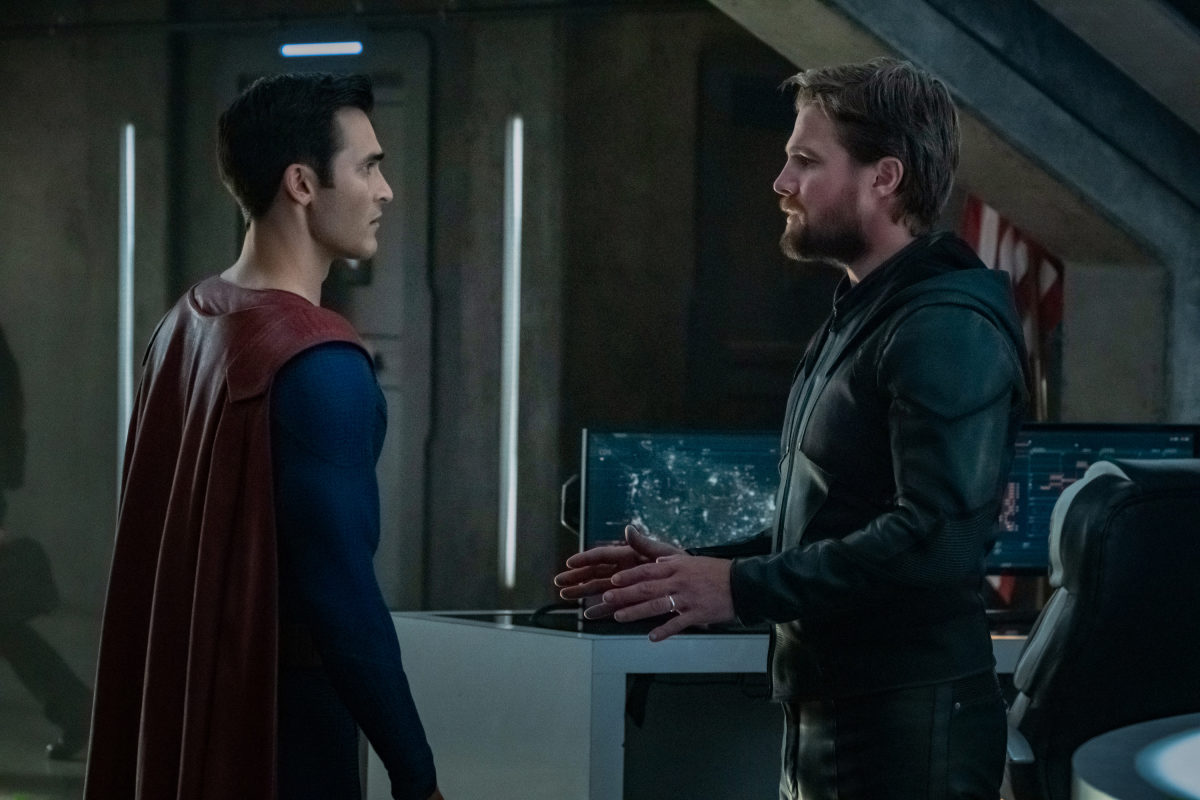 The multiverse has also served as a great way to resurrect characters – like Laurel Lance (Katie Cassidy Rogers). The Laurel of Earth 1 died a while ago, but Cassidy-Rogers now plays her earth two doppelganger. So if you tune in and ask “wait, didn’t they die?” They probably did and the version you’re seeing is from another reality.

Also Tom Cavanaugh has played about thirty different versions of the same guy from multiple universes. It’s a whole thing.

The big point is that all those multiple realities are in danger of being destroyed – in fact, Laurel’s Earth 2 was already destroyed and it looks like Earth 1 and Earth 38 are in the crosshairs of the baddies. 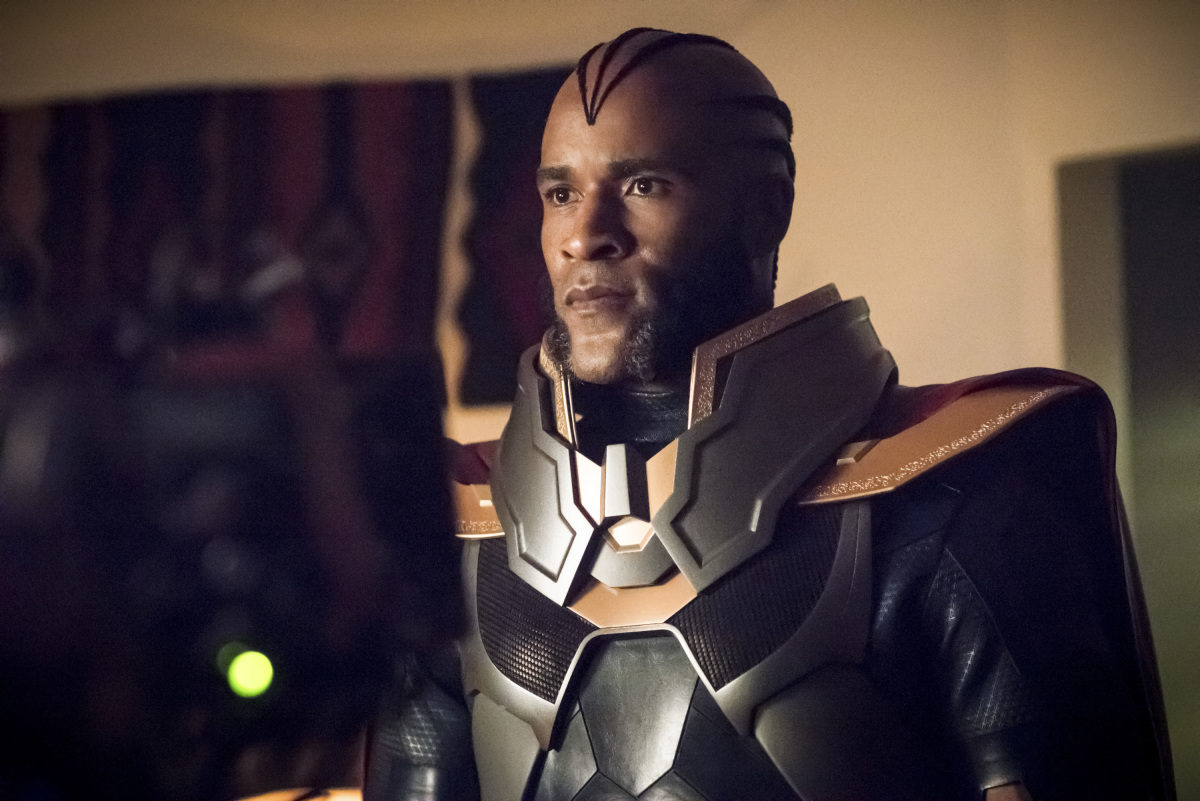 We haven’t met the big bad of Crisis yet on any Arrowverse shows, but we have met the guy trying to save it: The Monitor. LaMonica Garret was introduced to the Arrowverse last year in the Elseworld crossover as a cosmic guardian of all reality. Along with his assistant, Lyla Michaels (yes, Diggle’s wife) who has now become Harbinger, he’s been working with heroes to prepare to fight the coming crisis.

Which will be spearheaded by his brother, The Anti-Monitor. As the monitor protects reality, this guy wants to destroy it and all the heroes of the multiverse need to come together to stop him.

Oh, and remember how I mention Tom Cavanough has played a lot of different guys from different realities. At the moment his character on The Flash is a guy called Nash Wells who’s been searching for The Monitor but in the final moments of last weeks Arrowverse shows, we teed up for Crisis as we saw Nash blasted by light, presumably to become Pariah, another superbeing who in the comics works for the Anti-Monitor…but we’ll see if that bear out here. 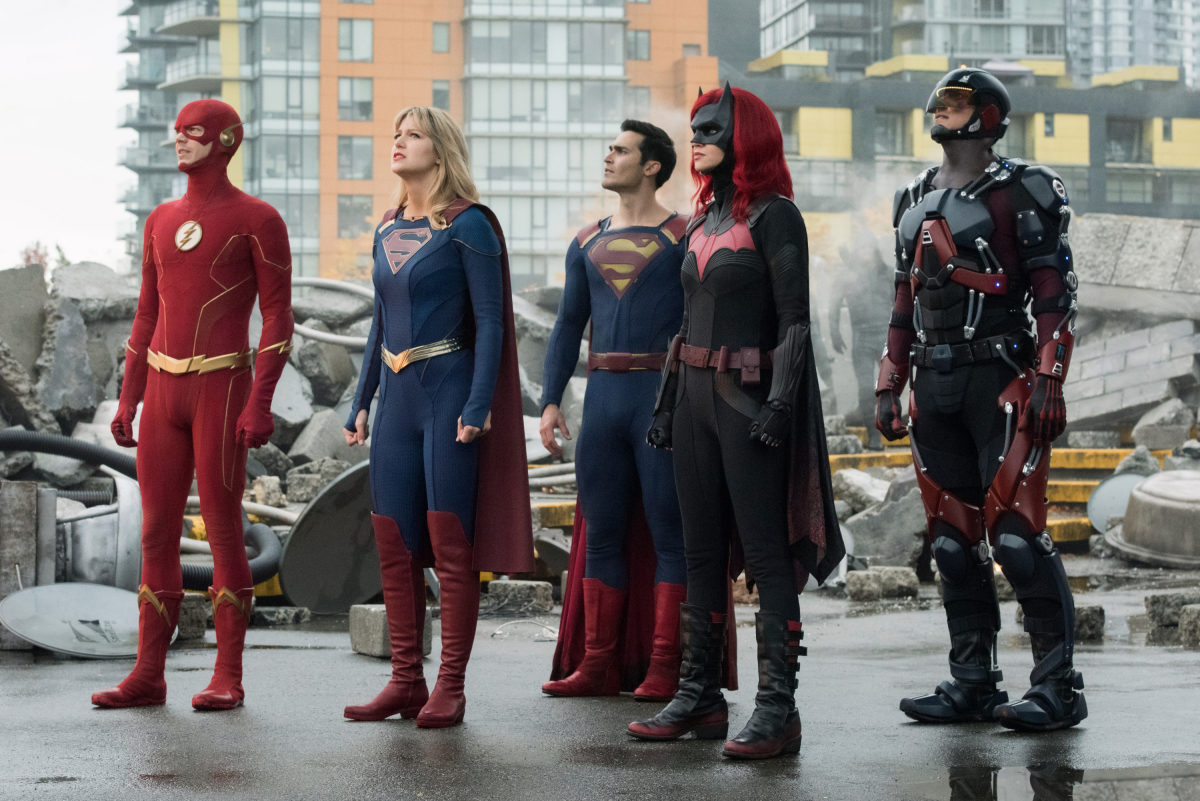 Barry Allen and Oliver Queen believe they are going to die in the crisis.

This is probably the biggest thing to know to be emotionally invested in the main heroes of the Arrowverse. Both The Flash and The Green Arrow have been told by the Monitor that they must die to save all of reality.

Barry visited a bazillion versions of the future and saw the only way to save everyone was if he died – though we don’t know if he knows how that works. Oliver, on the other hand, made a deal with the Monitor last year, trading his life for Barry and Kara’s in Elseworlds. Both these heroes have spent all of their seasons coping with the fact they might die and everyone is sad about it, including their families and kids. 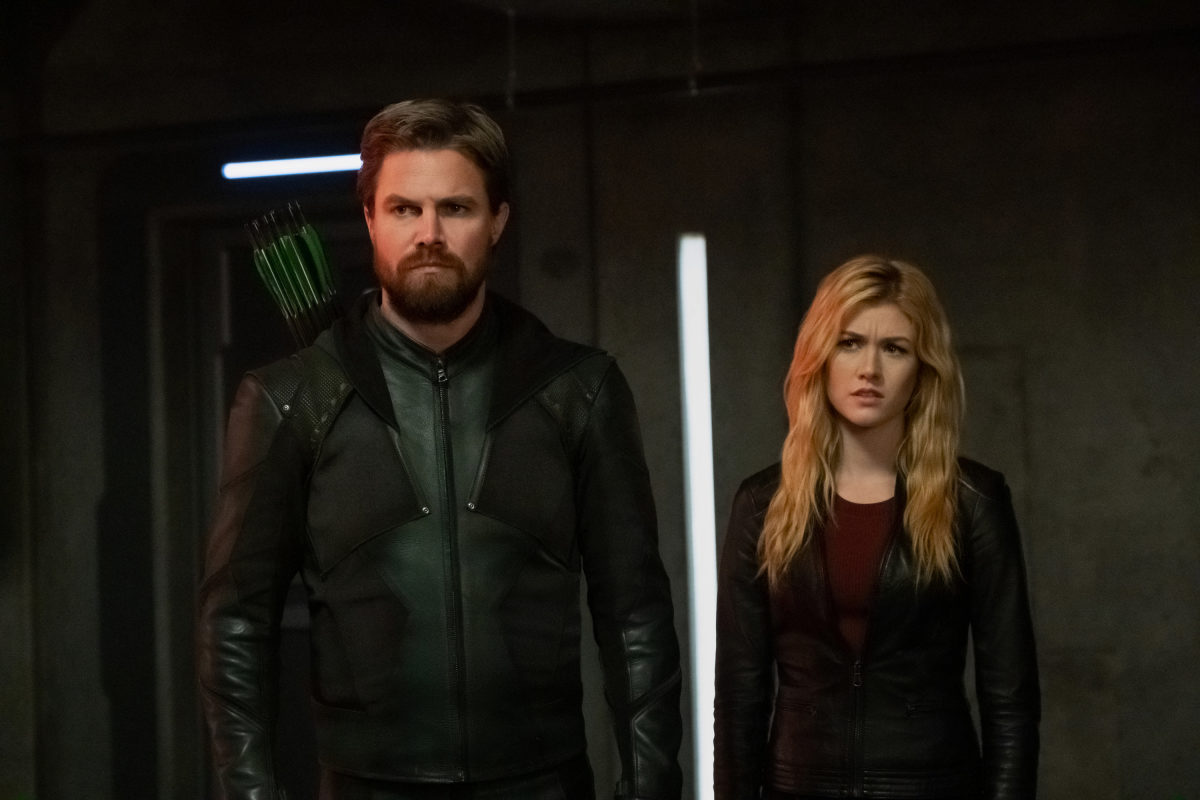 Yes. Oliver’s Daughter From the Future is There.

The Monitor is a kind of a nice guy, in a way. He’s done a lot across the Arrowverse to help and reward the heroes that will fight in the Crisis. He bright J’onn’s brother out of the Phantom zone over on Supergirl and on Arrow, he brought Oliver’s kids (and Lyla and Digg’s adopted son but not their real son) from the future to spend time with their parents before they die. So this is why Mia Smoak-Queen (Katherine McNamara) is joining the fight.

Also, Earth 38’s Superman and Lois Lane (Tyler Hoechlin and Bitsie Tulloch) let the planet last year to get married and have a baby on the Kryptonian colony of Argo, where Kara’s mother also is hanging out.

The Entire DC Universe is Fair Game for Cameos

Any and every very version of  DC comic we’ve seen on screen is fair game for a cameo or easter eggs. So far we know that will include Tom Welling of Smallville, Burt Ward from the original Batman series and Kevin Conroy, the voice of Batman in Batman: The Animated Series among others. Producer Marc Guggenheim has teased that there are more cameos and shoutouts coming that we don’t know about, so keep your eyes peeled.

That’s pretty much all you need to know going in if you’re not caught up. Supergirl, Batwoman, and Black Lightning haven’t had lead-ups to the event like Arrow and The Flash have and Legends actually starts their season next January with the conclusion of the saga, so we’re all good there.

As with the comic of the same name, we know “worlds will live, worlds will die” and nothing will ever be the same in The Arrowverse – and it might just be that Crisis changes so much, it will be a great reset so you can easily rejoin a series you’ve fallen behind on after.

Crisis On Infinite Earths begins Sunday, December 8th at 8:00 with a special episode of Supergirl on The CW.