Prepare for This Summer's Solar Eclipse Across America | The Mary Sue 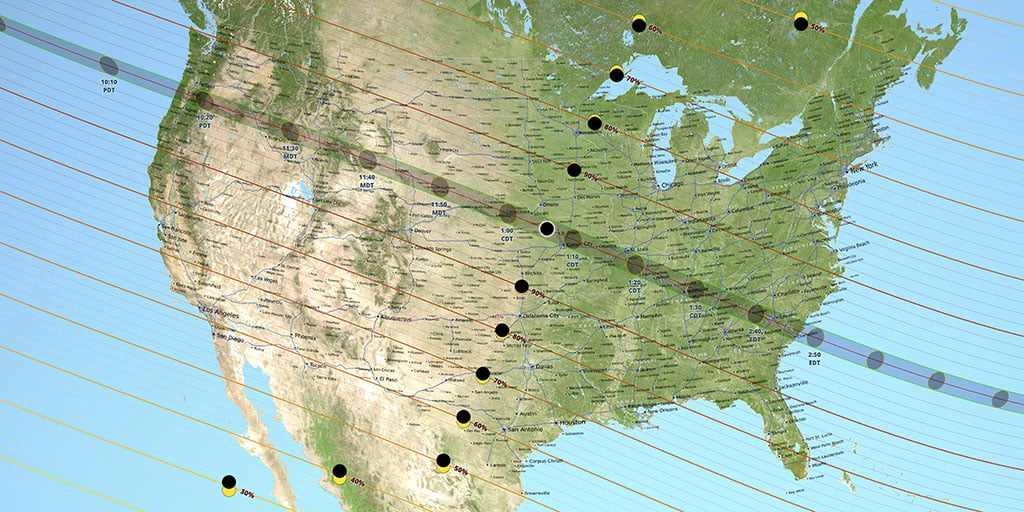 This summer, one of the most impressive—and frankly hard to miss—astronomical events will occur across pretty much the entire contiguous United States of America. In August 2017, a total Solar eclipse will cut a path from Oregon to South Carolina, with even those outside of the narrow path of totality getting a pretty great show up and down the whole country.

The eclipse hits land on Monday, August 21, 2017 at about 10:15AM PDT (1:15PM EDT) and then travels across the country on a diagonal, cutting through several states (and the worldview of flat Earthers). In addition to the full map of the U.S. picture above, NASA has individual state maps that you can check out with exact viewing times for each area, as well as an interactive map for times in any location that’s far from the exact path. Take a look at those here to plan your day.

The most incredible show will, of course, be within the path of totality, wherein the Moon will entirely block the disc of the Sun, suddenly blocking out its light and exposing a view of the Sun’s atmosphere—the corona. That only covers a 70-mile radius, but much of the country will still get to see the Sun blocked by 70% or more.

That should still be a worthwhile sight, although it’s only safe to view a partially-blocked Sun—which also goes for those in the totality path outside of that incredibly short time—with special glasses or other viewing apparatus. NASA has extensive safety data on that, and eclipse glasses are a relatively cheap option that you can find online, which you absolutely should if you’ll be anywhere close to totality and want to observe this event. Save your eyes, please, and pick up some pairs for your kids, too. Science is fun for the whole family!

The path of totality will leave the East Coast of the U.S. at about 2:48PM EDT, shortly over an hour after it started. It’s a rare event; the last total eclipse to pass directly over the contiguous United States happened 38 years ago. If you’re anywhere close to the path of totality, do yourself a favor and get there if you can—either way, you won’t want to miss it.