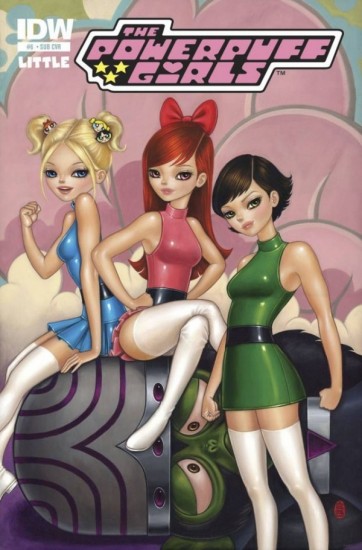 The brouhaha about the cover started when comics retailer Dennis Barger Jr., owner of Detroit’s Wonderworld Comics, called IDW out on Facebook for “taking grade school girls and sexualizing them as way older… they are wearing latex bondage wear mini dresses, which on an adult would be fine but on the effigies of children is very wrong… especially on an ALL AGES kids book marketed for children.”

That was actually a Cartoon Network mandated cover, by an artist of their choosing. I think they were thinking of it more along the lines of “female empowerment” than the kind of thing you guys are talking about, but certainly, we’re sensitive to the issues here. We love making comics for kids, and always want them to be appropriate. For what it’s worth, CN has been a great partner in that regard… I know an 8 year old and 10 year old really well, and always look at these kinds of things through their eyes… Half of the employees have kids here, and we pride ourselves in making comics they’ll enjoy and not give them a warped view of the world (except, you know, in a good way). Anyway, I certainly see your points, and we’ll be sensitive to these things, as I think we mostly have been.

Great. Now I get to be disappointed in IDW and Cartoon Network. Others chimed in against the cover, including Nancy A. Collins, whom you may know for her instrumental role in campaigning to boycott Dragon*Con before they got rid of co-founder/alleged child molester Ed Kramer. She pointed out that “These characters are supposed to be 6-7 years old, aren’t they?” Some defended the cover, pointing out that Blossom, Bubbles, and Buttercup would be legal now if The Powerpuff Girls took place in the real world… which A) it doesn’t, and B) is far, far beyond the point.

Thankfully Cartoon Network has realized they goofed and decided to pull the cover. Their statement to ICv2 reads:

In conjunction with our licensing partners, Cartoon Network Enterprises from time to time works with the artist community to reimagine and reinterpret our brands using their talents and unique points of view.  This particular variant cover for The Powerpuff Girls #6 from IDW was done in the artist’s signature style and was intended to be released as a collectible item for comic book fans. We recognize some fans’ reaction to the cover and, as such, will no longer be releasing it at comic book shops.

Yesterday the artist, Mimi Yoon, appeared to address the controversy on her Facebook page, where she wrote “one opinionated dog barks (i’m fine with that)… and the rest of the pack barks ‘pretending’ to know what they’re barking about (hate those idiots)… tsk tsk tsk.”

I’m going to go ahead and respectfully disagree that the people who objected to the cover are “idiots.” Look, if someone wants to draw fanart that takes young girls (or young ponies, not that I’m pointing fingers) and sexes them up, I think it’s gross (to use one word). But it’s not like the company that owns them is swooping in to shut individual fanartists down, barring extreme cases like the My Little Pony: Friendship is Magic Ask Princess Molestia blog. Whether they should… well, that’s a different debate. But the company itself putting out an image like the one above takes the ugh to a whole different level.

At least they acted quickly and decisively. It could be worse. What do you think of how they handled the situation?