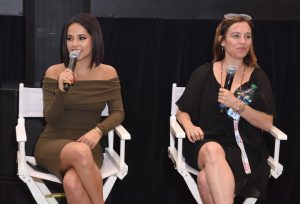 One of the perks of attending this year’s Bentonville Film Festival was getting to see all of the diverse filmmakers speaking so passionately about their projects. Among them was Amy Jo Johnson, best known for playing Kimberly on the ’90s classic Mighty Morphin Power Rangers. She made her feature directorial debut with the dramedy, The Space Between, which centers on a father who discovers that his child is not biologically his.

“As soon as I stepped behind the camera [I realized] ‘Wow! This is really what I’ve always wanted to do,'” she told The Mary Sue before adding, “I found my passion. I love it. There’s no turning back now.” Her next project will be something extremely close to her heart: a film called Crazier Than You, which she’s writing and also plans to direct. It centers on her mother who joined a cult for 12 years.

“It fascinates me why somebody does join a cult,” Johnson said. “[Her mother] had three kids, a husband, was an alcoholic … It was her safety net. She went in there to find support.” Johnson’s mother had joined a church which happened to be a cult and didn’t get out until more than a decade later. It’s a serious topic to tackle but Johnson plans to add some balance to it so it’s not so doom and gloom. “I like to take really heavy issues and find the levity and the humor surrounding it. I call them ‘heartfelt comedies.'”

It looks like the film will have a similar tone to The Space Between, which deals with infertility, divorce and self-harm but also finds moments to make you laugh. At the mention of self-harm, our conversation shifted to the Netflix series 13 Reasons Why and how it dealt with teen suicide. Critics and mental health experts have slammed the show for glorifying suicide while others hailed it for not holding back and sparking an important conversation. For Johnson, the show wasn’t so much must-see TV as it was irresponsible.

“I think it’s a very dangerous show for teens to watch, and even young girls,” she said. “I think it romanticizes suicide and rape in a way that is quite unbelievable. I know people love that show. I don’t know if it’s the greatest show for teenagers to watch. I think it’s a bit inappropriate and I don’t think very responsible of the filmmakers who put it out there.”

Actress Becky G praised the show for not sugarcoating teen issues but also alluded to “some problems” with how it handled certain scenes. The 20-year-old actress  is well-versed in teen problems, having played one in this year’s Power Rangers reboot. When asked about becoming the first queer Latinx Power Ranger, she told me, “It is an honor. It’s something that I was very excited about and, as an actress, there’s nothing [more] that I could have asked for.”

In a brief moment in the film, her character Trini alludes to having “girl problems” but director Dean Israelite confirmed her sexuality outside of the film. Should there be a sequel, Becky G says she’d like to see them explore that more in depth. “The truth is with something like that, you don’t just wake up and know. It’s a process. And so, as time goes by, if we make Power Rangers 2, 3, 4 … I’m excited to see how she grows.”

The film also teased a new member joining the team: Tommy, a.k.a. the Green Ranger. The post-credits scene merely mentions the character’s name a la Ferris Bueller’s Day Off, but that hasn’t stopped people from speculating about who could step into the role. “[Me and my castmates] talk about this all the time. We agree that it should be a girl,” she said. “I think it would be so cool because we have yet to see that. Obviously, Power Rangers has been around for a very long time, but I feel like it’d be so dope if she was a chick.” Paging Zendaya. How cool would that be?

Amy Jo Johnson on Mighty Morphin Power Rangers being diverse but having the Black Ranger played by Walter Jones and the Yellow Ranger played by Thuy Trang: “It was diverse but too on the nose. I don’t know if they did that on purpose or if that was a mistake. I don’t know the logic behind it but I think they definitely learned their lesson.” Was this ever acknowledged among the cast? “Of course! Oh my god, it was a joke. For sure, we would have jokes about that and be like this is ridiculous.”

Amy Jo Johnson on starring in the Disney classic, Susie Q: “Oh my god, we shot in Vancouver and I had a blast. It was the first role where I got to be the lead. And when you’re a lead in a movie, those actors are the ones who really set the tone on set. It’s a big responsibility and some people don’t do so well with it. You hear nightmare stories of TV show sets where it’s a horrible environment and [that] usually comes from who’s #1 on that call sheet. I loved it. I had a blast. That was my first lead in a movie. I loved that role. I just loved it!”

Becky G on being proud of her Mexican heritage: “It’s funny because I’m American. I’m very proud to be Latina. It’s been involved in my everyday life.” Something that struck her as a child was in the movie Selena when Abraham Quintanilla makes a speech about being too Mexican for the Americans and too American for the Mexicans and how you can’t be in the middle. “I used to stay up at night like, ‘I am the middle! What am I gonna do and how am I gonna do it?’ and I realize that’s not an issue because the truth is whether you’re Latin or you’re something else, we all come from somewhere. And it’s acknowledging that and embracing that … Wearing those flags proudly. I am the crossover and there’s a lot of kids just like me.”

Becky G on who she admires in the industry: “Zendaya is the epitome of what a strong young woman is. She’s very honest which I really appreciate because in this industry, it is so easy for people to be very manufactured and feel like there’s all these kinds of filters and they have to tiptoe around certain things. I feel like she, in a classy way, doesn’t shy away from talking about specific things…”