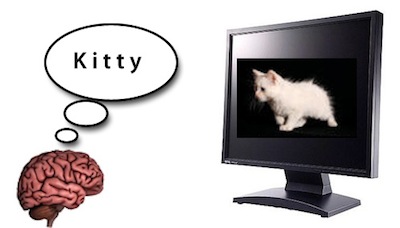 The boys and gals over at Intel are currently working on a computer that can be controlled with the human mind. Partially mind-controlled computers already exist, even games driven by mind-controlled peripherals do, but the new technology works a bit differently.

“The computer uses a form of 20 questions to narrow down what the word is. So a noun with a physical property such as a space, which you dig with, produces activity in the motor cortex of the brain, as this is the area that controls physical movements. A food related word like apple, however, produces activity in those parts of the brain related to hunger. So the computer can infer attributes to each word being thought about and this lets the computer zero down on what the word is pretty quickly. We are currently mapping out the activity that an average brain produces when thinking about different words. It means you’ll be able to write letters, open emails or do Google searches just by thinking.”

An advanced mind-reading computer seems like the way of the future, though how the technology will be able to discern between thoughts intended to control the computer and random disassociated thoughts remains to be seen. Cutting out the keyboard and mouse will probably maximize productivity, but the human brain is a random beast. If the computers can’t discern between intent and random thought, everyone’s deepest, darkest secrets might just pop up on screen at inopportune moments and get us all fired for inappropriate work behavior.