GLaDOS on a Potato PotatOS | The Mary Sue

GLaDOS PotatOS is Now a Thing You Can Buy 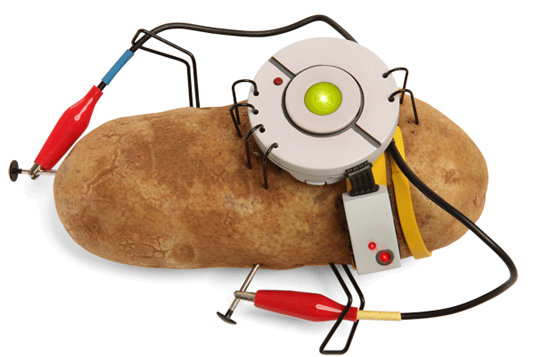 Hey, remember that bit in Portal 2 where evil computer and show-stealer GLaDOS gets turned into a potato-powered science fair project? Well, now you can relieve the experience of running around while being berated by an inert tuber with a blinking light stuck to it with the PotatOS from ThinkGeek. Happy days are here again!

The PotatOS includes everything you need (sans potato) to capture the spirit of hanging around with an angry computer attached to a vegetable. With blinking lights and insulting phrase action, the PotatOS will fill that empty void that completing Portal 2 left in you. It even comes with a handsome science fair-esque poster board written by the Valve staff.

Of course there’s a catch, albeit a minor one: The PotatOS has an onboard battery, since a potato just doesn’t provide enough power. However, it will only work once connected to a potato. That may seem unnecessary, but I think it’s kind of a nice touch.

Here’s what’s played when you first plug PotatOS in:

“Oww! You stabbed me. What is wrong with… whoooaaahh…. hold on, do you have a multi-meter? Never-mind, it feels like I’m outputting an extra half volt. Keep an eye on me, I’m going to do some scheming, here I go…. FFSSZZZTT. Whoa, where are we? How long have I been out? Did anything happen while I was out?”

Pressing the button will trigger one of 17 phrases, including:

“That extra half volt helps but it isn’t going to power miracles. If I think too hard I’m going to fry this potato before we get a chance to burn up in the atomic fireball that little idiot is going…. FFSSZZZTT.”

“Look! This place is going to blow up if I don’t get back in my body.”

“Listen to me. We had a lot of fun testing and antagonizing each other and yes sometimes it went too far. But we’re off the clock now, it’s just us talking, like regular people… and this is no Joke. We are in deep trouble.”

“Look, I don’t like this any more than you do. In fact I like it less because I’m the one that got partially eaten by a bird… I think I hear the bird! Pick me up!”

“In case you were wondering. Yes, I’m still a potato.”

“CLAP CLAP CLAP. Oh good! My slow-clap processor made it into this thing. So we have that.”

“Go on. Get a big fat eye-full, with your big fat eyes. That’s right. A potato just called your eyes “fat”… Now your fat eyes have seen everything.”

“Yeah! Take the lemons! Burn his house down! Yeah, yeah, yeah yeah! Oh I like this guy! Burning people… he says what we’re all thinking!”