Valve Thought of Making a Portal 2 Without Portals 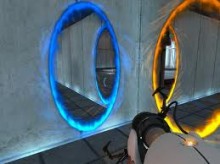 In a recent blog post, the always-interesting Sean Malstrom wondered aloud why franchise games tend to get stuck in familiar patterns rather than innovating, drifting towards what he calls “comfort gaming.”

“I do not understand why game series from the NES are frozen in time in how their content is structured. Why must every Mega Man game have 8 robot masters? Why must every Mario game have 8 worlds? Why not have more? I miss the days when Japanese game makers were like Miyamoto when he first showed off Super Mario Brothers to Nintendo staff. At first, Miyamoto only showed off five worlds so they would agree. Once they did, he showed off the other three! For some reason, at that time everyone was interested in pushing the content frontier. Now, it seems like no one is interested.”

One company that seems to be mindful of the trap of entrenched success is Valve: According to a recent interview, they considered making a Portal 2 that didn’t even have the series’ iconic portal gun.

From their interview with PC Gamer:

[W]hat if the Portal franchise is, instead of always being about Portals – which’d be tough because it’s called Portal – but what if it was always about introducing a new puzzle element that you’re going through? it’s about Aperture Science, and now you’re going through this new testing track with this new element.

Valve wasn’t totally immune to user opinion, though: They toned down the notions of a Portal 2 all about goo or all about the gravity gun when “every play tester” said they missed the portal gun. Still, the interview is a nice glimpse at a company that’s not content to rest on its laurels, even if that makes its game development process a longer and more difficult one.