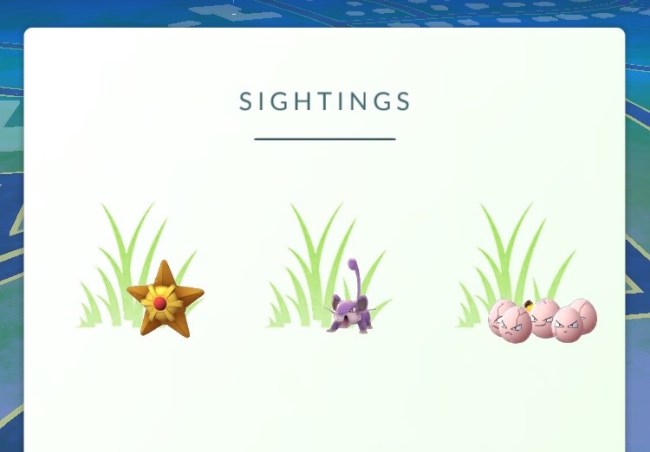 Pokémon GO finally got a—seemingly, since the last one was only just over a week ago—long-awaited update yesterday, and it fixed a few of the game’s lingering issues, perhaps even including the broken Pokémon tracker. Only time will tell on that front, as the update notes said that developer Niantic would be using this update to test a variation of the “nearby” interface, but the other fixes are more than welcome.

Still, the biggest question with this update is, “What’s going on with the ‘nearby’ feature?” The Pokémon tracking mechanism hasn’t accurately shown how far away specific monsters are for weeks, and last week’s update removed the broken graphical indication entirely while Niantic worked toward a fix. They’re still in the process, but the feature now looks like the image at the top of this post—at least for most players.

Even that slight change is somewhat functionally different, but the “subset” of users targeted for testing seems to have gotten a much bigger change:

Pokémon that are within range of a Pokéstop now give a direct indication of where to look for them, while Pokémon in the “sightings” tab appear to be a little off the beaten path. With plenty of players being far from any Pokéstops at all, this is likely to provide little help to some, while others in more urban areas are likely to benefit greatly, but we’ll have to wait and see whether anything else changes during the testing period. Additionally, in the sightings tab, it seems that Pokémon of the same type are no longer shown more than once (no more Pidgey armies in the nearby tab), and Pokémon that have despawned automatically clear from the tab without the need to restart the app.

All that said, probably the biggest full bug fix this time around is the iOS battery saver mode, which has now been reinstated after it was removed last week for being a glitchy mess. The mode causes the screen to darken if your device detects that it’s been dropped to your side, as you would when putting it in your pocket while waiting for the vibration that signals a nearby Pokémon. Since you need to leave the app running and your phone unlocked to get the notification, a darkened screen can go a long way towards preserving battery life for longer play sessions/having a functional GPS to guide you home when you’re done.

Previously, the feature functioned on iOS, but (in my personal experience) it would render the app unplayable when the screen reactivated. The screen would display the game, but no touch input would be accepted, forcing the player to restart Pokémon GO entirely in order to catch whatever had popped up. With how long it can sometimes take to log into the game—and Niantic’s login servers probably not needing all that extra activity—the feature was a hindrance in at least as many ways as it was a help, but now it seems to function perfectly.

Other additions and changes to the app include a prompt that pops up when you’re detected as traveling at speeds only possible by car, which asks you to confirm that you’re not the one doing the driving before allowing you to play. Of course, it’s possible to just lie, but that probably removes some liability for Niantic as well as serving as a deterrent for at least a few players who would otherwise play while driving. (Seriously. Don’t.) Experience point bonuses on catching Pokémon were also fixed, meaning you’ll now accurately get a bonus for “great” and “nice” throws in addition to a curveball bonus if you threw a curveball.

A few other minor things were addressed, including the ability to change your trainer nickname once—good for players who are having second thoughts about using their real names and such—but we’ll be keeping a close eye on the rollout of the new tracking mechanism and how it meets the needs of the rather widespread and varied player base.