Why Pokemon GO Heralds a Tectonic Shift in Gaming 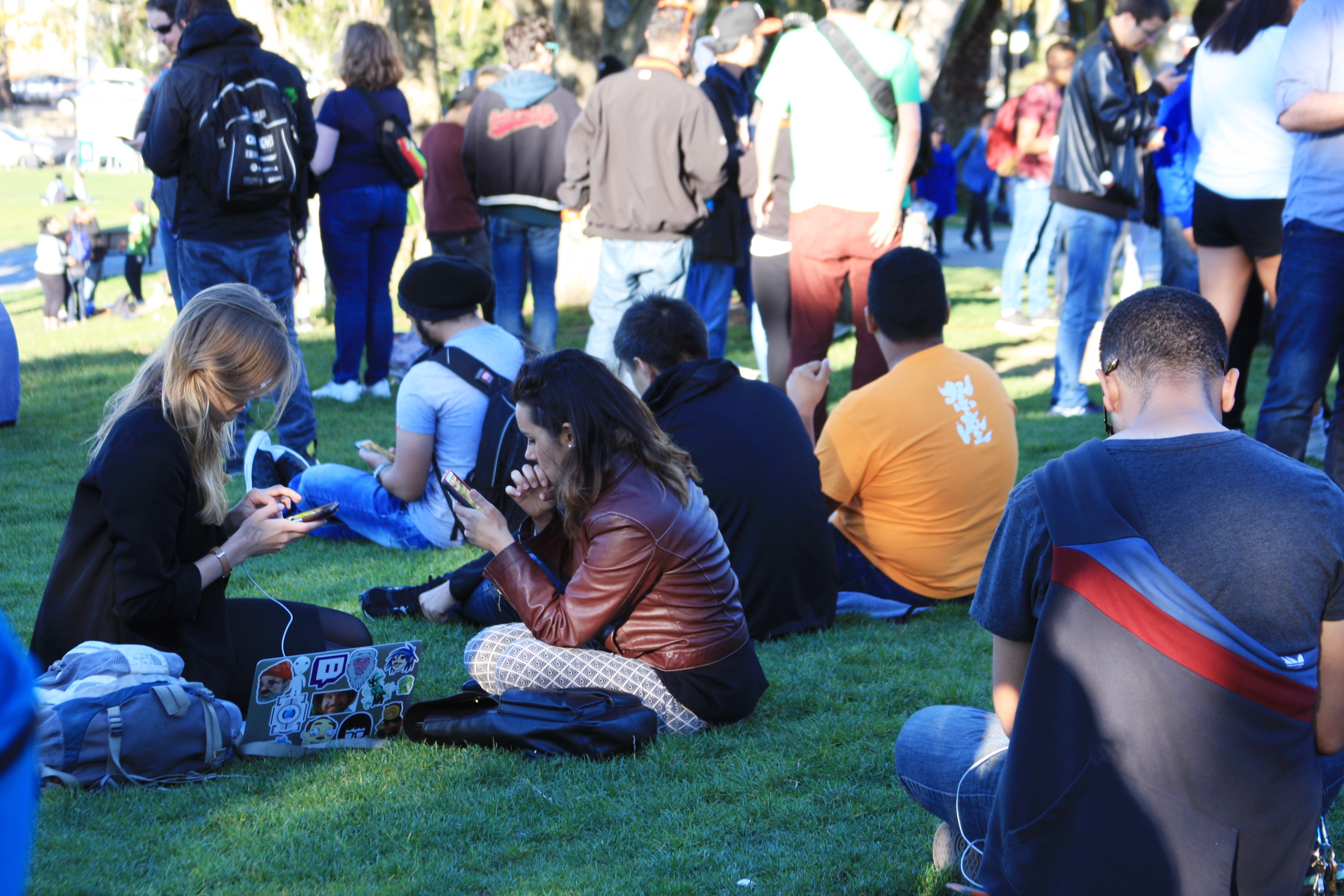 Last week I joined thousands of trainers attending a “Pokemon GO Crawl” in downtown San Francisco. Somewhere between watching a reporter interview a trainer about the benefits of catching Pidgeys and drinking “Team Mystic” cocktails—vodka, blue tea, lemon, and egg white—I realized Pokemon GO is merely the first tremor of a tectonic shift in the way we game and interact.

The Pokemon GO Crawl began as a Facebook event, organized by local Pokemon enthusiast Sarah Witsch. “I just wanted to go out with friends and do a bar crawl while playing Pokemon,” says Witsch. “Then it turned into a huge viral gathering.” The event page concluded with over 8,000 people RSVPing as “Going” and nearly 30,000 RSVPing as “Interested.”

Witsch “decided to roll with it,” and decided to split the event into two, relatively more manageable halves. One group was to meet at San Francisco’s Embarcadero waterfront and another in Dolores Park. From there, they would make their way downtown at 6:30 pm, converge on Market Street, and then disseminate among the bars and restaurants to poke-party on a smaller scale.

On the day of the crawl, July 20 th , poketrainers began to congregate in Dolores Park ahead of the 6 pm start time in a pilgrim-like procession. Thousands ascended the large hill in the center of the park with bowed heads and phones out. They stopped before a statue at the hill’s peak which was, by no coincidence, a Pokestop, and thus the source of a continuous stream of lure modules.

The crowd stood trancelike, awaiting the appearance of new pokemon. The gravity of the moment was not lost on one trainer, who declared to anyone who’d listen that he’d “been training for this day since Kindergarten.” When a new Pokemon did appear, the trainer with the fastest 4G was the first to sound the alarm: “Scyther!” If it was a rare Pokemon, those in hearing range converged toward the Pokemon’s expected location while—much like a flock of crows—taking up the cry themselves: “Scyther-Scyther- Scyther.” That the servers didn’t crash was a miracle.

Most wore street clothes, some with Ash Ketchum hats. There were also a lot of hooded-onesie Pikachu costumes and a few other B-list pokemon. Pokemon enthusiast Mike Evans came in full drag as Team Rocket’s Jessie, her makeup courtesy of her sisters in the order of the “Sisters of Perpetual Indulgence.” Her full beard was dyed pink. 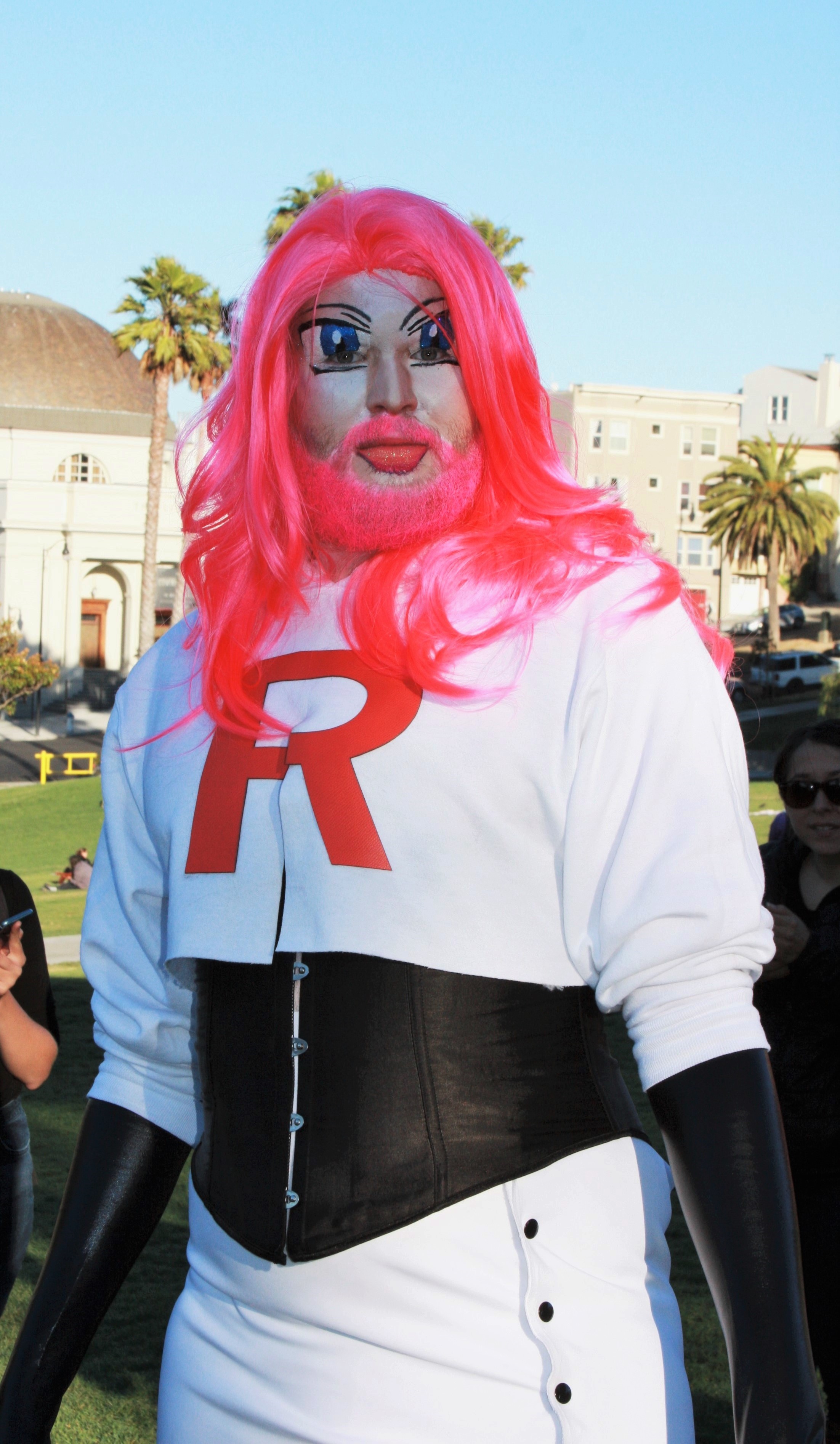 Police patrolled the perimeter to make sure “no one gets taken advantage of,” while tone deaf TV reporters—including the likes of CNN—tried to make sense of the phenomena with questions like “what Pokemon are you most hoping to catch?”

Well after the 6:30 departure mark, people began to grumble about leaving. But with no designated leadership, it fell upon hero trainer Patricia Andrews to scream above the crowd and get things going. When asked where her inspiration came from, Andrews imparted this wisdom: “You can only catch so many Zubats before it’s time to move on.”

The party shuffled down the hill and then onto Guerrero Street. From here it was a procession of the blind leading the blind. Most trainers were fixated on their phones and followed the shoes visible in their periphery. At the front of this long unbroken chain was a young guy in a Pikachu outfit towing a giant speaker and vigorously doing the Harlem Shake.

One innocent bystander tried to flee the crowd while nervously describing the unfolding events in a phone call. “There’s a mob!” the man exclaimed to a person on the other line. He ducked into an alcove, only to find it occupied by some guy in a Charmander onesie swigging from a bottle of Jim Beam.

There was loud cheering when the Embarcadero and Dolores Park crowds at last merged on Market Street. Though to be perfectly honest, it’s possible the celebration was coincidental; a Pokemon had just appeared.

At last, trainers broke off with their new friends to walk among the many bars working hard to court them. 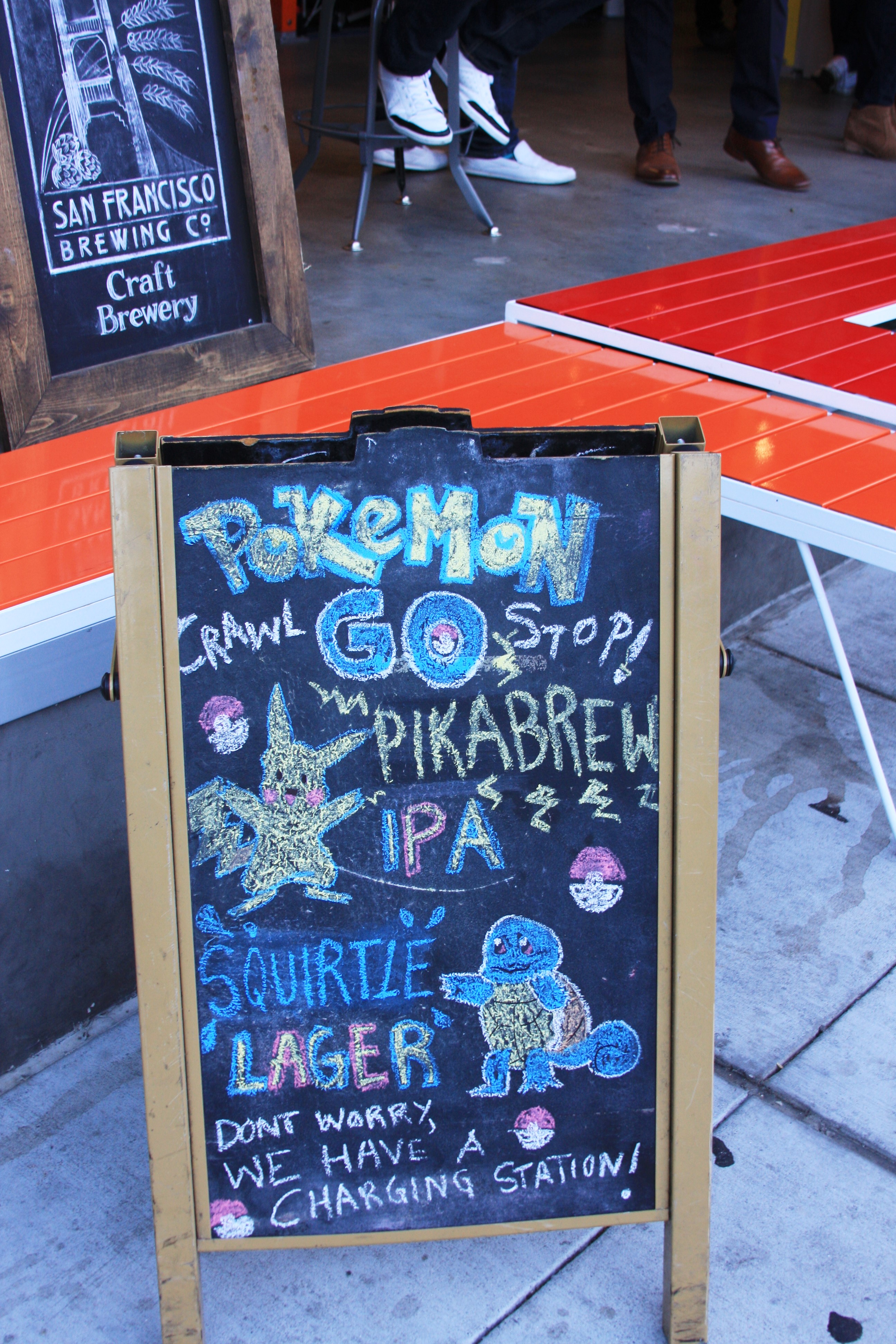 I dropped into The Myriad, a food and drink hall, which had prepared a smorgasbord of amenities and evening specials for trainers: free drinks with dinner for trainers level 12 and up; a glass of champagne for any trainer possessing a Snorlax; red, blue, and yellow Jell-O shots for Teams Valor, Mystic, and Instinct; and a colony of power outlet strips labelled “recharging station.” In essence, it was a lure module for Pokemon GO players.

At this bar, and many others that night, I tipped glasses with fellow Pokemon GO players, all of whom had glowing things to say about the game. Christian Diaz, a Chicago-based trainer, talked passionately to newly-made friends about how the game enhanced his enjoyment of the real world. “The actions I take have direct consequences in the game. Which direction am I gonna walk in? Do I wanna go to this park? As an adolescent, playing a video game meant taking myself out of reality. This is the first time that it’s putting me into reality.”

It was this conversation with Diaz that got me wondering if Pokemon GO was not simply a fad, but the beginning of a new kind of game culture. A culture, which like the game itself, is ever-present all around us. A culture that will be fed by the both the demand of players and the encouragement of businesses, like McDonald’s, profiting from foot traffic.

So what might these future real world games look like? One trainer envisioned a driving game, some kind of augmented-reality Mario Kart, in which players race and swipe shells at their opponents to damage their prestige score. Sounds horrifically lethal, but I would almost certainly play it. Other ideas included a first-person shooter in which players must snipe each others’ phones across the room, and a version of the summer camp game “assassin,” in which strangers in a venue must “kill” an assigned target while simultaneously trying to avoid their own killer. Throw in a twist where players are assigned a character with motives and you have yourself an impromptu murder mystery party anytime, anywhere. Augmented reality drinking games? I don’t know if that’d suck or not, but I’d certainly try them.

Before leaving that night, Christian Diaz remarked that for the first time “a video game is bringing us together”—stranger to stranger, business to customer—”rather than keeping us apart.” He paused and added, “that’s a really unique experience.” It sure is. At least for now.

Daniel E. H. Smith is a San Francisco writer. Check out his thoughts on a potential Pokemon GO doomsday scenario or visit his blog on Bay Area living. Follow him on Twitter @DanielEHSmith.