You may have known about composer/pianist Sonya Belousova and director Tom Grey back when they were known as Cosplay Piano. One hugely successful IndieGoGo campaign later, the duo is now known as Player Piano, and for their latest musical endeavor, Belousova has taken on the Doctor Who theme, composing her own arrangement in celebration of the show. Check out the awesome result above! Then, check out how Belousova and Grey came up with the video, and what Player Piano’s plans are for the future below! 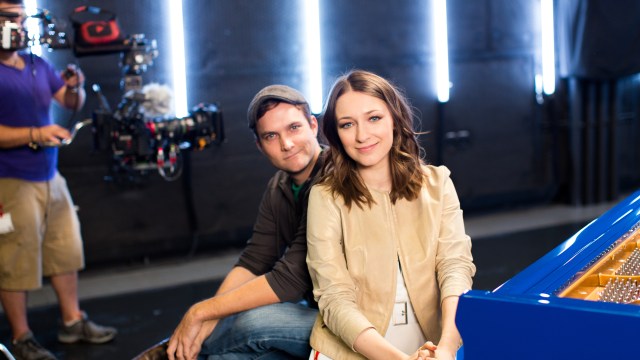 On their Doctor Who fandom:

Tom: Of the two of us, I definitely geek out to Doctor Who the most. I grew up watching Tom Baker’s 4th Doctor, and I had lived in England for a few years when my family moved there in the early 90s, so I’m very much tuned in to British culture and television. I’ve been an avid fan of modern Doctor Who.

Sonya: As a composer, I’m definitely familiar with the Doctor Who soundtrack. However, growing up in Russia, I never had the opportunity to watch the show. So I was introduced to Doctor Who recently.

On the choice of the Doctor Who theme, and the process of arranging this new version:

Tom: Doctor Who is a cultural phenomenon that has so much history and generations of fans. We had always talked about doing a video that pays homage to the full history of the Doctors. It was important to me as someone who grew up with this incredible series that we give all the Doctors their due.

Sonya: To me it was exciting to work on the Doctor Who main title. The show has been around for over 50 years and the theme has already been through a significant amount of modifications. It presented a great opportunity for me to put my creative spin on it. When it comes to arranging music, I never write a note-by-note transcription. This is not something that interests me and this is definitely not something that our fans expect from us. The whole idea behind my arranging process is to give the original music theme a new prospective that reflects how I feel about this particular music at the moment. When it’s appropriate for the case, I tend to write a complex virtuosic arrangement, which is always a lot of fun to work on. Doctor Who is definitely not an easy piece to perform. And by the way, I probably did over 50 takes of it on set! 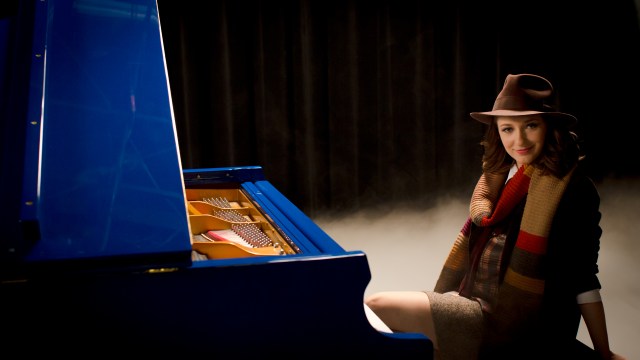 On presenting a female Doctor, and the process of creating the video:

Tom: Frankly I’m surprised there hasn’t been a female Doctor already. Just think of how Clara would have reacted had her precious 11 regenerated into Cate Blanchett. It would have been amazing from a character point of view. (Don’t take that to mean that I don’t love Capaldi’s Doctor…I just think it’s time). As far as the video goes, one of my favorite episodes is ‘The Snowmen’ where Clara follows the Doctor onto a cloud above London. I always enjoyed that imagery, and when they used a similar cloud top at the end of the 50th, I knew we had to figure out a way to make it work. The Blue Piano was actually provided by Hollywood Piano, where we shot our ‘Duel of The Bumblebee’ Video. I was walking around their warehouse and saw a blue piano in the corner stored on its side with a blanket covering it. My eyes lit up.

On what Player Piano offers that other YouTube musical experiences don’t:

Sonya: One of the big differences, in my opinion, is that I don’t do covers, I write my original arrangements. Just covering note-by-note someone’s music doesn’t particularly appeal to me as a composer. When our fans click on our video, they never know what to expect from it. It’s like opening a present, there’s an element of surprise. Moreover, I’m incredibly happy to have Tom as my partner in Player Piano. It’s just a perfect combination of me being in charge of all the music production and him dealing with all the video aspects to achieve great results.

Tom: First and foremost, as much as I think that our pretty videos and all the work our crew puts into the amazing production design and photography offers something different to online audiences, the reality is that it’s all about Sonya. Her incredible skill, dedication, and on-screen presence sells Player Piano far more than any contribution I can make. It helps that I’m her biggest fan. I literally geek out every time I go over to her house to hear a new arrangement. But of course, the video aspects certainly offer an element that you don’t often find and I’m sure that helps draw people to our work.

On the future of Player Piano:

Sonya: I’m a big fan of film/TV/video game scores and I love arranging this wonderful music, however there will also be popular songs, like ‘Bohemian Rhapsody’, or classical music, like Prokofiev’s ‘Montagues and Capulets’ or Rimsky-Korsakov’s ‘Flight of The Bumblebee’. Regarding live performances, we’re definitely planning to have more of those in the near future. Last year we had a big show at the Anime Expo with me performing my arrangements as a featured soloist with the 70 piece orchestra and a 30 piece choir. We’re currently in talks regarding more shows like that.

Tom: We’ll keep making more. That’s the short of it. We love making these videos and are finding an audience that loves watching them. While the majority of what we do will center around film/TV/video game scores, we’ve already begun branching out into more popular songs and classics. Our past videos in those categories include ‘Bohemian Rhapsody’, ‘Duel of the Bumblebees’, and ‘Montagues and Capulets’. There’s a couple of modern songs that we’ve been chatting about and we also have some original compositions in the works. It’s important to keep it varied so that Player Piano can explore all types of music.

In addition, we’re currently working on a Nintendo Themes Album based off of the songs from our ‘Nintendo On The Spot’ video, and sorting out our Comic-Con plans this year where we hope to have some live performances. In the future, expect to see some larger orchestra type shows such as Video Games Live. Mark my words, Sonya will be the first female John Williams.