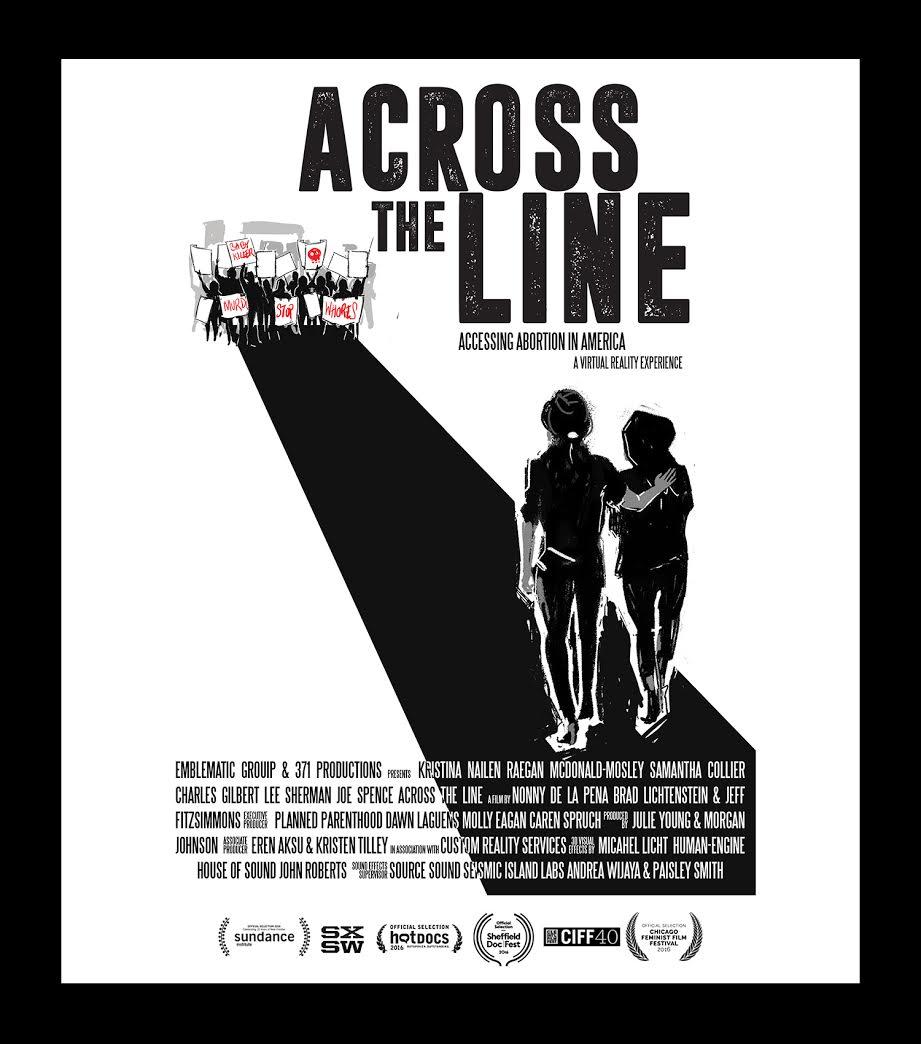 In much of America, vitriolic comments and gendered slurs from protesters are a given fact of being a Planned Parenthood patient or healthcare provider. Although anti-abortion protests certainly happen where I live in New York, those demonstrations are more of an anomaly here than elsewhere in the United States. If I need to access abortion or other health care services where I live, it’s unlikely I’ll be faced by a crowd of demonstrators. But at a screening Monday of Planned Parenthood’s new virtual reality experience Across the Line, I learned, as first-hand as possible without actually living the harassment myself, what it’s like to be called a “whore,” a “wicked, pathetic woman,” and a “Jezebel feminist” for seeking healthcare.

Across the Line is a seven-minute virtual reality film starring real Planned Parenthood patients and healthcare providers. The movie uses actual footage and audio recordings of protests to put viewers in the shoes of a patient—Kristina Nailen, who received an abortion from Planned Parenthood in the past and plays herself in the film—as she arrives at an Illinois Planned Parenthood for an abortion.

Across the Line is more of an improvised reenactment than a scripted film. It opens with Kristina and her co-star, Planned Parenthood Chief Medical Officer Raegan McDonald-Mosley, reenacting the experiences they’ve had as patients and providers coping with anti-abortion extremists. Kristina admits in the examining room that she was unsettled by the demonstrators; Dr. McDonald-Mosley tells her patient “I’m sorry you had to go through that.”

The second scene was recorded as Kristina and Planned Parenthood patient Samantha Collier Charles were approached while driving into the clinic by an anti-abortion ‘counselor’, who advises Kristina to make “a more dignified choice for you as a woman and as a mother.”

Kristina Nailen in a scene from Across the Line

The final scene is the most immersive and disturbing. Using audio recorded by co-creator Brad Lichtenstein, Across the Line puts the audience in the middle of a crowd of CGI protesters. As we attempt to walk from our car to the health center’s entrance,  the group shouts at us that we’re whores who will burn in hell.

Across the Line can be viewed using Google Cardboard, HTC Vive, and Gear VTR. At Monday’s event, I tried out the latter two and found both experiences very effective, although the Vive was by far the most immersive. With the Vive, you have a chance to actually walk in Kristina’s shoes—a member of Planned Parenthood led me by the hand while I wore the headset, so that I had a more visceral experience of moving through the demonstrators in Across the Line‘s final scene.

This was my first time using VR, but I didn’t have any of the nausea I’d worried about experiencing. Lichtenstein told me that ensuring the movie didn’t make people sick was a priority for him and for Across the Line‘s co-creator, visionary VR artist Nonny de la Peña: “Why would you want to turn anyone off from the nascent technology right at the beginning of its arc, especially with an issue that’s so important?” Making the film easily accessible was vital, since their ultimate goal is to show Across the Line to everyone from anti-abortion extremists to state legislators.

One of Lichstenstein’s dreams for the project is to use Google Cardboard to share it with protesters outside clinics. He also outlined some of his other plans for the future of Across the Line: “We are starting to develop ways to work in the South with women who are kind of neutral or just disengaged around abortion, we think that the bullying in the film might bring them into a conversation about abortion access. We’re starting to—we’ve already done a little bit of this, but we want to do more—screenings with legislators, particularly at the state levels who are involved with passing legislation that impacts women’s access to abortion.” 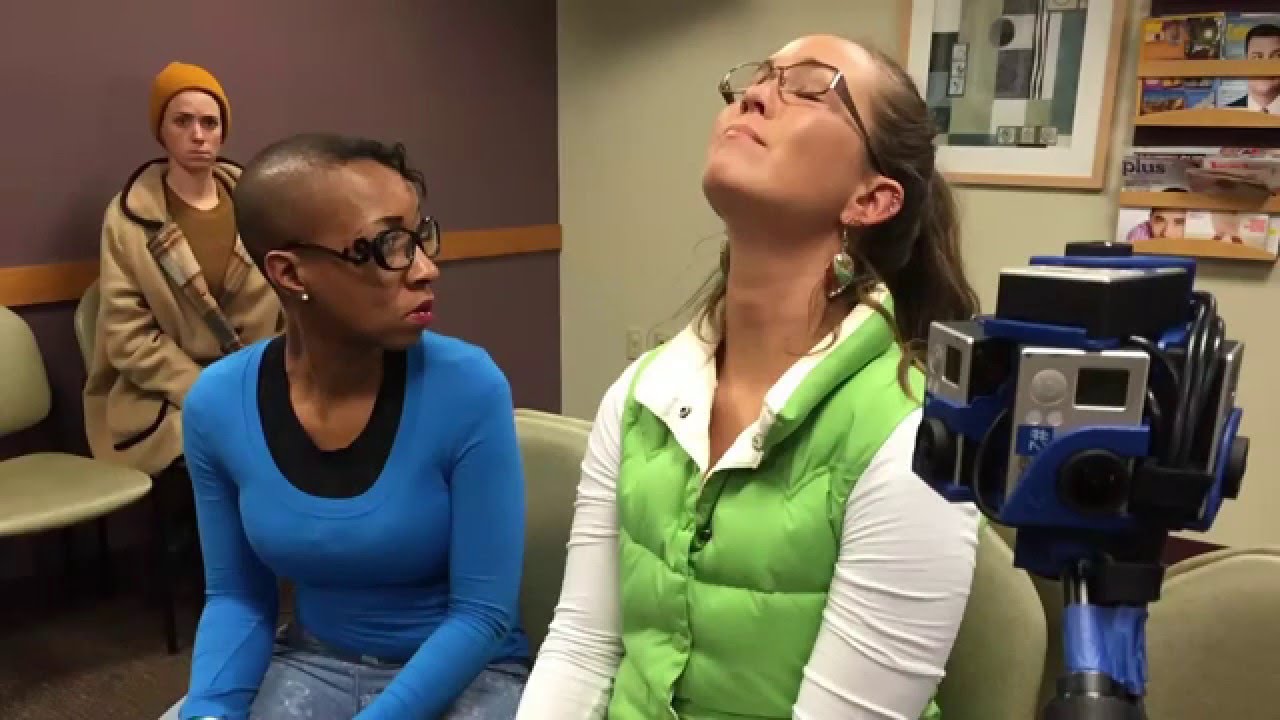 Kristina Nailen (r.) and Samantha Collier Charles while filming Across the Line

In the future, he says the movie could even become a canvassing tool for Planned Parenthood: “either this version or a shorter version in Google Cardboard, which is available now, would be a really effective door to door campaign. Instead of leaving a leaflet you can say to people ‘do you want to watch a short movie?'”

At this week’s event, Dr. Raegan McDonald-Mosley told me she hopes the film will be valuable to viewers like me, who don’t have first-hand understanding of the harassment women can experience in some states when accessing abortions: “I think what bothers me about it is that there doesn’t seem to be a lot of focus on the women and her situation. I just wish people would take a step back and put themselves in their shoes. I think that’s what heartening about this movie, it puts someone who’s never been in that context, maybe they live in a state where there aren’t a lot of protesters or they’ve never gone to a health center before, they can experience it.”

Dr. McDonald-Mosley practices primarily in Baltimore and New York, and says she doesn’t encounter protesters as frequently as providers in other areas do. But a recent experience made her very aware of how vulnerable her patients must feel when approached by anti-abortion extremists: “last week I was going to the office and there were protesters outside. And I recently had surgery so I can’t drive, so I literally had my Uber driver go totally out of the way so I could avoid having to enter through the front of the health center. In that moment where I’m taking care of my patients, I want to be totally focused on their care and be that compassionate provider that I know that I am. But if I’m uncomfortable, it’s hard for me to do that; so I do whatever I can to avoid the protesters.”

Of course, patients don’t have a secondary entrance they can use for the clinic to avoid protesters, and there’s only so much Dr. McDonald-Mosley can do to protect them outside the center. “These women are already nervous, the last thing they need is to be berated and harassed. I can’t control what happens outside on the sidewalk, in the parking lot, or when they get home, and that’s what sort of breaks my heart is that these people expend energy harassing my patients.”

That expenditure of energy is what baffles me the most about the demonstrators recorded for Across the Line. Lichtenstein told me he even met extremists who boasted of records of 500 days or more protesting in a row. When I asked him if he felt that dedication was generally motivated by religious reasons, he declined to speculate too much, but said “one of the things I discovered is that there’s a number of reasons why men and women decide to become born again. And some of it might have to do with abuse in their past, some of it might have to do with addiction, there’s a variety of reasons. I had one conversation with a young man who was shouting at women along a street, and he said that he was looking for redemption.” In other words, “it’s deep on every side.”

Across the Line premiered recently at Sundance, where its creators learned that the experience could be educational even for Planned Parenthood providers who are already very familiar with anti-abortion rhetoric. Lichtenstein described one healthcare provider’s response to trying out the Vive experience: “when you’re in it every day you often don’t know the amount of stress and pressure that you’re taking on and carrying, and there was one woman who flipped it off, she was a woman from Alabama, and she said ‘honey, I loved what you did, but I just cannot watch it for another second.’ And she hugged me afterwards and was in tears. And then one of the other women, I guess she was the one in Mississippi, she was telling me ‘thank you so much that you guys made this, I want to share this with all the providers so that they can take a moment and self care.'”

Everyone I spoke to who’s involved with Across the Line emphasized the potential of technology like this to create more compassion and understanding for the women who need Planned Parenthood. But what’s implied—more by how timely the film is, given the violence against Planned Parenthood within the last year, than by anything explicit in the movie itself—is that the stakes are so much higher than just protecting the emotional well-being of patients and providers.

The anti-abortion extremists recorded in Across the Line are never physically violent. But Planned Parenthood’s Executive Vice President Dawn Laguens says in an early trailer released for Across the Line, “I don’t think you can divorce violent things that happen from the violent, hateful rhetoric that is its fuel.”

Across the Lines‘ goals are certainly ambitious, and I’m very curious to see what happens when the film is shown to more legislators or used out in the field.

I know it’s expanded my awareness and empathy for women who have to contend with harassment when visiting their healthcare provider, but I don’t know how a movie like this will play with people who don’t have an inherent willingness to consider women’s feelings. I’m coming away from Across the Line impressed by everyone involved and optimistic about the potential of this new technology, but also unsettled by the reminder of how convinced and righteous anti-abortion protesters can be in their cause.

(images via Planned Parenthood and 371 Productions)