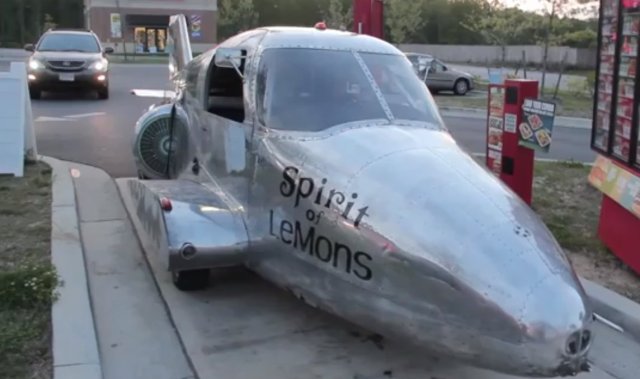 What do you do when you have an abandoned airplane and a van? If you’re officer Jeff Bloch you get some buddies together and weld them together into the a plane that’s also a car and call it The Spirit of LeMons. I’m not saying that this street-legal plane/car isn’t cool to look at it, but a car that flies is cooler than a plane that drives. That should be your next project, officer Bloch.

The Spirit of LeMons was first built to participate in a race called 24 Hours of LeMons. It’s an endurance race for crappy cars, and sometimes people enter things like cars that are also planes. Bloch and his plane/car won the prize for the car that, as Bloch put it, “has no business being on the race track, and yet is really cool and comes out there and does its very best anyway.”

More recently, Bloch made The Spirit of LeMons street-legal by adding headlights, turn signals, brake lights, and even got it insured. Bloch says the biggest problem now is that he’s concerned about drawing focus from other drivers who should be focusing on the road, not his plane/car or the fact that it should really have been a car/plane.

Bloch wants to enter the vehicle into more races, and even plans to drive it across the country with his brother. What he should be planning to do is to put some wings on it and make a car that flies.

Watch the video and its creator in action in this video by Barcroft TV: