Pixelthreads: Fashion and Futurism, a Look at Sci-Fi Game Fashion

I’ve had the future on my mind a lot these days, and not just in terms of what it will bring to me personally. Because I’m me, I think about what we might be wearing in the near and far future, what technological developments will happen, what trends we’ll latch onto. What trends hypothetical aliens would love? This is in part because I’ve been playing a lot of sci-fi games lately, although I probably would anyway because I’m weird like that.

The future seemed to be on the mind of most designers of spring/summer 2016 fashion as well. Even Chanel, probably the one fashion house you wouldn’t expect, seemed to be asking, “What will the Chanel Woman be wearing at her high powered job at a space station on Jupiter?” It was incredibly exciting for me. But where do these ideas about modernity in clothing come from? How do we come up with our vision of what we’ll be wearing in the future? Why do so many sci-fi games look aesthetically almost exactly the same? These are the ideas that I want to explore with this piece, because I don’t think we can come up with truly interesting or ground-breaking designs for our future garb without understanding where it comes from. 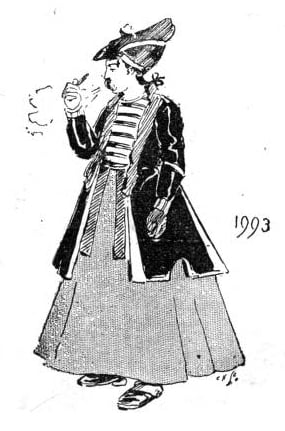 To say that the designs of the future are influenced by our present is probably an understatement. This tendency came be traced all the way back to 1893, when a magazine called The Strand ran a piece on how they envisioned we would be dressing for the next 100 years. The result is a pretty outlandish interpretation by our modern standards, but one that I think made sense for a Victorian. The costumes look more like something out of Alice in Wonderland, or an especially bizarre production of The Three Musketeers than what actually ended up occurring. There are a couple of reasons for this.

The first is that a Victorian would have no idea about the social impacts of the First World War or women’s suffrage would have on women’s wear, which changed drastically between 1918 and the 1920s. The slimming down of silhouettes in the early 20th century had a lot to do with the invention of things like the bicycle, which started the bloomers craze and started to make it more acceptable for women to participate in sports, which in turn made clothing less restrictive. The Strand’s piece doesn’t feature a lot of women in trousers, but the ones that do definitely feature this bloomers influence. All of these looks feature a lot of volume because volume was a big trend in the 1890s, and hats because a Victorian gentleman or woman would never conceive of going out without a hat. (This trend stayed pretty true until the mid-century, though most of the hats looked quite different.)

The second thing that the authors of this piece couldn’t have predicted also were the technological changes that would occur in clothing manufacturing, from the making of garments themselves to the materials that make them. Let’s not forget that clothing is a type of technology, after all. Most clothing styles without history are restricted to that culture’s access to technology, which includes things like patterns, needles, even stitching. Pants were introduced to the West probably from Mongolia, because Europeans had no idea how to make them. Mass production in the late 19th and early 20th centuries obviously had a huge impact on clothing, since clothing that can be made simply and en masse became popular over having them tailored. The materials themselves changed. Synthetic fabrics had a huge influence on fashion, especially in the early 20th century. The brassiere pretty much exists because of the invention of nylon, because it meant they could be made cheaply and were more comfortable than silk because of the stretch. 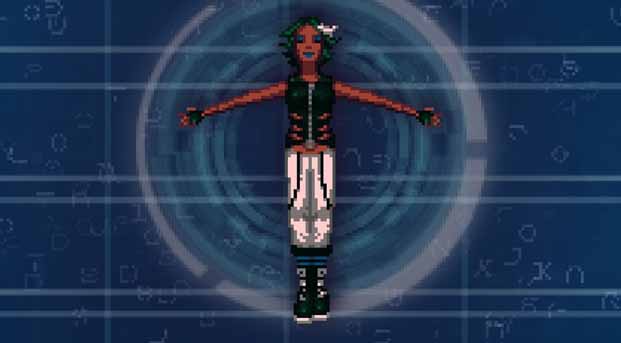 This trend continues well into the real-life 20th century, when sci-fi started to become more ubiquitous. The style and aesthetics of Star Trek go hand in hand with the mod look, as does 2001: A Space Odyssey. Star Wars’ fashion borrows a lot from other cultures, but you can see the hint of the rise of the American designer, like Ralph Lauren, in characters like Han Solo’s costume, and you can see quite a bit of Studio 54 era Yves St. Laurent in Leia’s. Alien changed the aesthetics of sci-fi pretty drastically, with its practical, utilitarian clothing, tanks, jumpsuits, that could be seen in the punk scene. This trend largely continues into the ‘80s with other films like Terminator. Blade Runner’s ‘40s retro futuristic look came along at the same time when that trend was all over the runways. (‘40s revival was a pretty big part of the ‘80s fashion scene.) In the ’90s we saw the rise of ’90s minimalism both on the runways of Calvin Klein and on screen in movies like Gattaca. In the late ’90s, we got more of a raver-kid aesthetic (See The Fifth Element). The current sci-fi aesthetic has so far stayed pretty close to ‘90s minimalism, but with 21st century flourishes with pops of color, unusually shaped footwear, and bold, colorful makeup.

Now, I’m sure you can see where videogames fit in here. Most contemporary sci-fi videogames are still aiming for that ‘90s minimalist aesthetic, though you can still sometimes see the influence of Alien in them, particularly if they’re a survival horror style game. 2014’s Alien: Isolation of course falls into this category, but with the contemporary add-on of Amanda Ripley’s white Converse, but you can also see that same influence in games like Dead Space. The best examples of games that capture a 21st century sci-fi aesthetic are probably games like Mirror’s Edge and Mass Effect. Skin-tight jumpsuits are all over sci-fi games, because our most common image of NASA astronauts are in their classic orange “Pumpkin suits”, but also because of superhero comics (especially for women’s costumes) and because they’re easier to animate. But probably what you think of most when I say “sci-fi videogame” is the armor. That sleek, multipurpose “power armor” that is in pretty much every sci-fi game that’s set in space, be it Destiny or Mass Effect or even Half Life. If there’s one single garment that typifies the sci-fi game “look” it’s usually this. 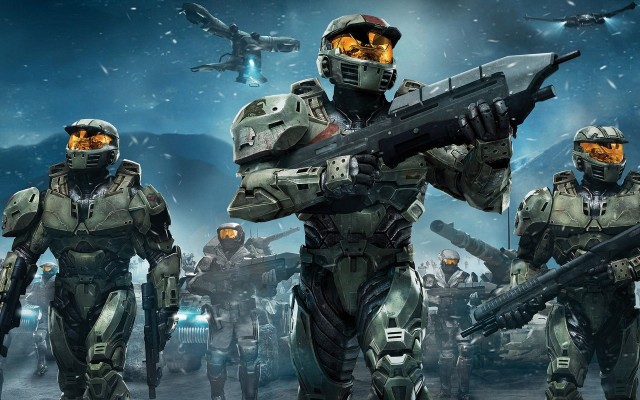 I’m not entirely sure what the first videogame is that started the power armor trend in sci-fi games. When I posed the question to Twitter, the answer that seemed to come up most was 1993’s Doom, though research doesn’t seem to bear that out, at least not entirely. (What…is that? Why does he have a belly top? I secretly kind of love it. It’s like stereotypical lady armor but on a dude. Even the cover art is super cheesecake-y.) Doom was certainly the game that kicked off the space marine first person shooter, which is why we see it so much now. I would probably say that the game that at least popularized it in so many AAA titles is probably the original Halo, which came out in 2001. Almost very sci-fi shooter that’s come out since then has featured this armor aesthetic in some form: Half Life, Mass Effect, even Dead Space. I can understand the logic behind it: they’re a kind of spin-off from fantasy game armor, but rendered in plastic (or something that looks like it) because that is “futuristic.” And also they need a spacesuit anyway. And the reason for its ubiquity is pretty simple: all of these games are about space marines, because apparently those are our main options. It’s never really made much sense to me though. Marines now don’t wear body armor (or not much). Soldiers haven’t worn armor in centuries! It’s honestly not that practical in a gun fight, where mobility is pretty important.

And while I understand the spacesuit part, using it for both doesn’t really make much sense. A spacesuit is a highly specialized garment. It has to do a lot of things: keep the wearer warm in sub-zero temperatures, but also keep the wearer from overheating. Provide air and stay vacuum sealed. Current spacesuits are 14 layers. It also has to be durable enough not to get ripped apart by things like moon dust, which will tear through anything. Having your spacesuit double as body armor probably isn’t something we’re going to see in the future. If it gets a hole in it, or a tear, or someone shoots the air tank, and you’re done. 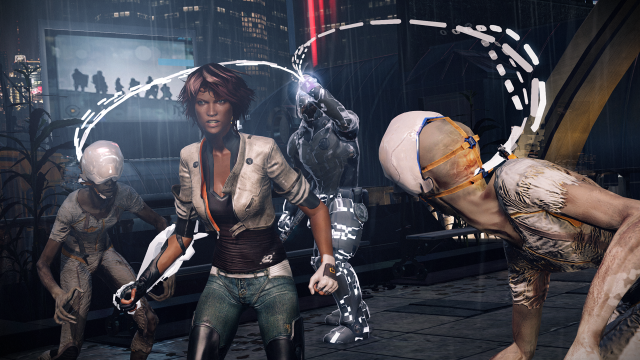 Remember Me’s costume reveal might have been the most disappointing one I have ever experienced. Acid washed jeans? Really?

But even outside of sci-fi armor, I usually find even pedestrian clothing choices to be fairly uninspiring, all skin-tight jumpsuits or stuff we have now with the collars removed. (If I never see a collarless collar or a mandarin collar again I will be a happy woman.) Even Mass Effect, with its multicultural alien world building has everyone wearing pretty much the same thing, no matter where they’re from. There’s no imagination, no playing with cuts or colors or silhouettes or construction. There’s no thought into what new technology might come along that will drastically change how we might dress. Games are supposed to be a fantasy, and unlike like a movie or TV show, they don’t have to be limited by what’s actually possible. And what’s actually possible can be quite amazing.

Take Comme des Garcons, for example. Designer Rei Kawakubo has kind of been known as the one to watch when it comes to truly futuristic, outré designs, and has been since the 1980s. Almost everything they make looks like something a literal alien would wear. And they do it all with materials that can be found right here on earth. Their Spring 2015 Ready to Wear show is in particular a recent show that videogames could stand to take some cues from. Those structured geometric pants would look totally normal on some far-off space station. Iris Van Herpen, a Dutch designer known for being the fashion world’s greatest proponent of 3D printing, most recent Spring 2016 collection combined 3D printing with folding, lacing, hand weaving, and laser cutting to create a stunningly modern collection featuring stunning 3D printed lace gowns, dresses, and coat, and sheer pants that look like they were made out of crystals. Noir Kei Minomiya’s Autumn/Winter 2015 show wove, bonded, and studded polyester georgette, silk, even tulle to create rigid, structural pieces without using a single stitch. Hussein Chalayan’s Spring/Summer 2016 featured clothing that was washed away with water to reveal the real design. Chalayan has also made dresses that can be transformed with a single tug. And this is just a tiny, tiny sample of what fashion designers are already accomplishing.

I just really hope that there’s more to the fashion of the future than a suit of armor or a pair of cargo pants.