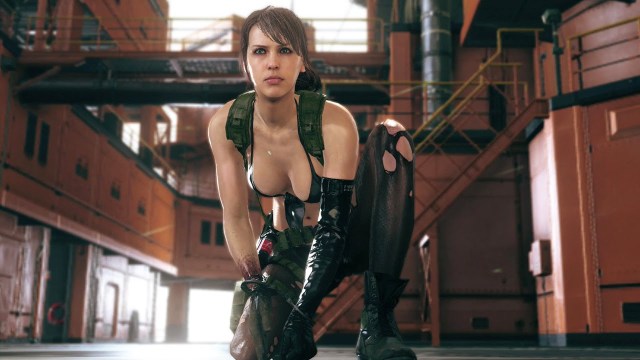 The reasons for Metal Gear Solid V’s Quiet, the game’s silent female sniper, have probably been one of game’s biggest fashion mysteries. Her look caused a bit of an uproar when her character was finally revealed in all her bikini top glory, largely due to the fact that this is a female character that cannot talk and is also heavily sexualized. Hideo Kojima, the series director, then responded to the criticism by saying that players would “regret their words and deeds” when it came to the reveal for why Quiet is dressed this way, much to my own amusement.

Now, I don’t really want to talk about Quiet and her clothing in the sense of “you can’t dress women like this because it’s demeaning.” That’s a boring conversation, and I personally don’t believe in the idea that sexy or revealing clothing is demeaning to women. Women can dress however they want, as long as it’s their own choice to do so. I do have a problem, though, with characters being needlessly and senseless sexualized in games (usually by male developers) when it doesn’t make sense for the character, but that’s more of a storytelling and character development issue than a “slutty clothes are bad” one. In terms of Quiet, I do think that she falls into “needless and senseless” category, as most female game characters do.

But let’s go back a little bit. So, with the release of the new Metal Gear Solid this past month, we finally got to find out why she’s dressed so revealingly. Honestly, it’s kind of disappointing, though I’m a bit mad this didn’t make one of my predictions. Anyway, the gist of it is, Quiet has to have as much of her skin showing as possible because some kind of parasite makes it so she can only breathe through her skin. It’s also the explanation for why she can’t talk.

I mean, I have a lot of questions about this outside of what’s she’s wearing, like, “If she ever bathes or goes out in the rain, would she drown?” but that is an entirely different article. It’s pretty silly (this is a Metal Gear game), and I’m not entirely sure that this reasoning makes sense, especially since you can dress her in other clothing options later in the game, and she’s fine, but OK. I’ll accept this as a fact, Kojima. That still doesn’t mean that your choices regarding her design work, or does what I think the game is trying to accomplish with her character. 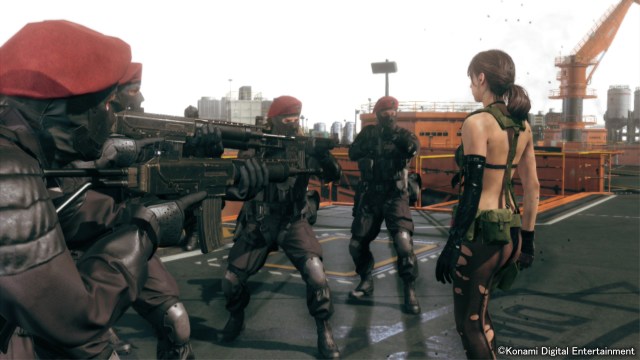 My main problem with it is that it’s just so dull. I think it does fit in with the world, in the sense that her gear goes with the black and camo thing the game has going on (this is the only way I think that it succeeds), but it lacks the visual interest of some of Big Boss’s outfits. Big Boss wears pretty much the same color palette, it’s all very military-inspired, but his have a lot more visual interest: tons of buckles and snaps, harnesses, and other details that you kind of need to stay in this color palette. Even Eli/White Mamba/Liquid Big Boss (so many names) gets a cute lil’ necklace. In comparison, Quiet’s outfit isn’t even trying. They just slapped on a bikini top and some ripped up tights and called it a day. Plus, have you ever worn opaque tights as pants? They don’t stay up on their own, they’re not really meant to!

It proportionally looks really weird as well; the shortness of the shorts, the tights, where the boots cut her off, make her look really squat and unbalanced, so I find it really visually unappealing. It’s just dull and lacking in any kind of style or visual interest, and it really does not work for me. It’s such a shame because I think some of the men’s outfits (Kaz!) are really great, but it feels like the character designers just really did not know what to do with Quiet.

And it’s not like the Metal Gear series is incapable of dressing women in an interesting way either (Strangelove! Paz! Seriously though, girls in ties = yes.) I think its worst crime related to this, though, is that it’s too boring to tell us anything about Quiet as a character. It’s just so bland, so lacking in personality, which I think is a huge mistake, especially for a character who literally can’t speak. To put this in perspective a bit: Jack from Mass Effect is dressed in a very similar way, but her hair and tattoos and all of the other little details make the look interesting, and also serve to tell you a lot about the character, since a lot of the tattoos carry meaning for her. Quiet doesn’t have anything like this. Even her hairstyle is a boring ponytail. (We won’t get into how sad I am no one really has fun ’80s hair in this game that is supposed to be set in 1984.)

Then there’s the satire argument, which I think is a completely valid one to make about Quiet—that her entire purpose is to make fun of how most modern women in games are portrayed and dressed. The fact that she literally has to dress that way because otherwise she would die could be kind of funny, but unfortunately I don’t think it quite works as satire or parody either for a few reasons. The first one is that sending up how female characters in games are over-sexualized is hard. The main reason is the simple fact that we’ve been conditioned to accept some pretty ridiculous outfits as just par for the course for women characters in video games. (See: almost every fighting game ever made.) 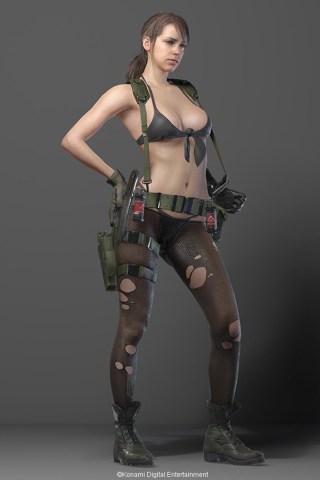 So an outfit needs to be pretty ridiculous to be read as parody, and I don’t think Quiet’s tries hard enough. There’s kind of a lip service there with the visible thong straps, but it’s just not campy enough to really drive that point across, if that is in fact what the team wanted to do. It’s too much like how women are dressed all the time in games to be read as humorous or even as an attempt at humor. It’s easy to do for male characters, and I think Metal Gear has often been interested in doing this. After all, you can dress Big Boss in topless outfits and tiny speedos too.

But this works precisely because you rarely, if ever, see male characters sexualized in this way. In fact, if this was the statement that Kojima and the team wanted to make with Quiet, it would have made much more sense to oversexualize all of the male characters (or at least the male lead) with their default outfit, while dressing Quiet the way a male character would be dressed. With jiggly pecs. And/or crotch bulges. However, we all know what happens now when they try that.

This is a prime example of how costuming, how clothing could have been used to maximum effect, and the game just completely squanders it. Simply not enough thought was put into it. That’s it. I won’t speculate on the reasons why, be it the team didn’t understand what they wanted to accomplish with Quiet’s character or even worse, couldn’t understand, but the end result is the same: a boring, uninspired look that doesn’t say anything, or even doesn’t say what I think they were trying to. However much skin she isn’t or isn’t showing doesn’t really matter, and while the MGSV team probably should have known better than to dress Quiet this way at this point, I think it’s much worse that because of that lack of thought, anything they were trying to confuse with her character got muddled. Clothing can be a very powerful storytelling device, and it simply wasn’t used here to its best effect.