4 games that explore the potential of the dress-up game. 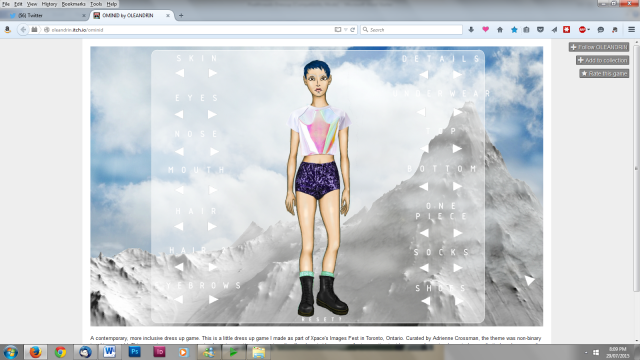 The dress-up game, like most games that are geared towards women as an audience, have a bad reputation. When I say the words “dress-up game” you probably have a pretty solid preconception of what that means: mobile, freemium, very, very pink and gender essentialist. Maybe there’s a brand tie-in, like Bratz dolls or Frozen. (There are so many Frozen dress-up games, y’all.) I am personally of the opinion that if you’ve spent more than five minutes in any game’s character creator, you have no business dissing dress-up games. I also think that it’s a vastly underappreciated genre that has a ton of potential for subversion and exploration. Luckily, I’m not the only one. There are lots of indie game makers, artists, and developers out there exploring what can be done with the dress-up game. Here are a few of my favorites.

(try to) Dress Up 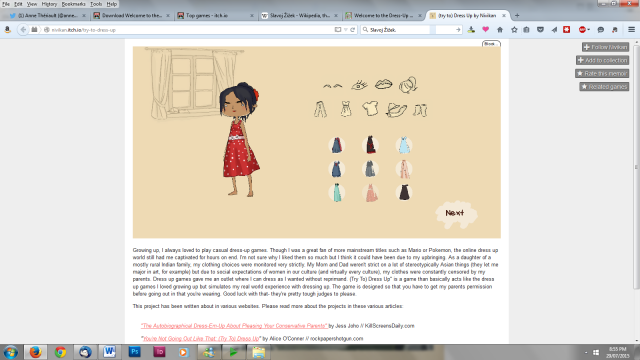 (try to) Dress Up is an autobiographical game of sorts, one where artist Nivetha Kannan works through her own past of having conservative parents who policed how she dressed. Mechanics-wise, it works like any other dress-up game: you have your closet full of clothing items you can pick, which you can use to dress up your digital “mannequin.” You have complete freedom to dress however you like, but the real goal is to not get stopped going out the door. “You go take that off. Now.” your unseen parent says, and you have to go back to the beginning and try again.

I’m not gonna lie: I have not succeeded at getting a parent-approved outfit in this game, probably because I didn’t have parents who cared about how I dressed. (try to) Dress Up really forces the player to reconsider what their ideas of modesty are and an understanding of the small ways women’s appearances are judged and policed every day.

OMINID is described as a “queer response to character creation games in culturally relevant video games”, and a response to how video game character creation systems tend to be very binary and gender essentialist. Dragon Age: Inquisition is probably the first major game to try to break this mold, by having all haircuts be the same for all genders, all genders can wear makeup, all can have Adam’s apples if you so choose. OMINID was created as a part of Xpace’s Images Fest in Toronto, where the theme was “binary in the non-binary world”. The gender of the character is intentionally ambiguous, and there are no rules as to what clothes are appropriate for them to wear. There are dresses, short shorts, button downs, and t-shirts. It’s a fairly pared down subversion of the dress-up game, and even though the game is technically unfinished, I think it does achieve what it sets out to do: make you think about the gender binary in terms of appearance.

On a more superficial note, it has done something only the best character creators inspire in me, which is extreme hair envy. All of the hair options are SO GOOD. 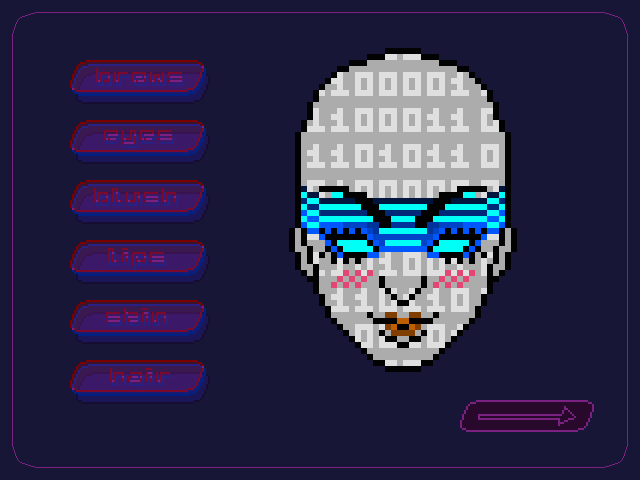 Femmepocalypse explores more of the make-up aspect of the dress-up game, where users change the futuristic space makeup on the avatar in order to get different endings and even take over the world. It explores how femininity and makeup can be empowering rather than oppressive, a sentiment that I like a lot.

Femmepocalypse was made earlier this year for Dames Making Games Toronto’s (a fabulous organization I’m a member of) Feb Fatale jam, whose theme this year was custom controllers. When I played Femmepocalypse back in February of this year, it had the custom controller, a kind of mask that you pressed different sections of in order to change the makeup designs. Obviously the itch.io version doesn’t have that ability, but Femmepocalypse is still a very cool concept and gives you a sense of how much the dress-up game can be capable of.

Welcome to the Dress-Up of the Real 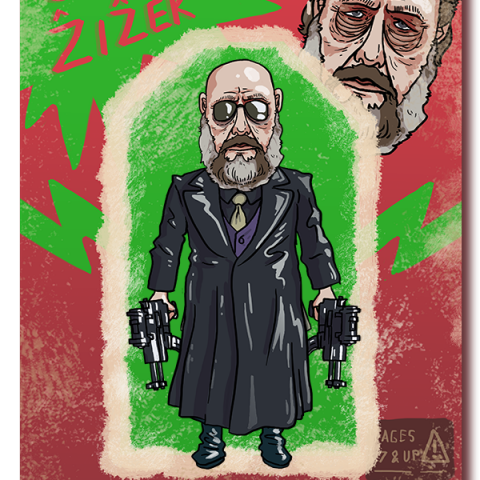 Welcome to the Dress-Up of the Real is a dress-up game about dressing up philosopher Slavoj Žižek. Yes, the neoliberalist and the man who wrote that ideology is an unconscious fantasy that structures reality. In a way, Welcome to the Dress-Up of the Real subverts that sentiment to its extreme, putting this man directly into an actually constructed fantasy world where you can dress him up like a Roman centurion, or like he’s in The Matrix. Everything in this game is a conscious choice, on the part of the creators and the player. Or maybe it’s not.

Plus it’s hilarious because this guy has permanent sad face, and I bet he hates the idea of being dressed up like a doll by strangers.