Pitch Perfect 3: A Painfully Unfunny Mess That Refuses to Embrace Its Gayness 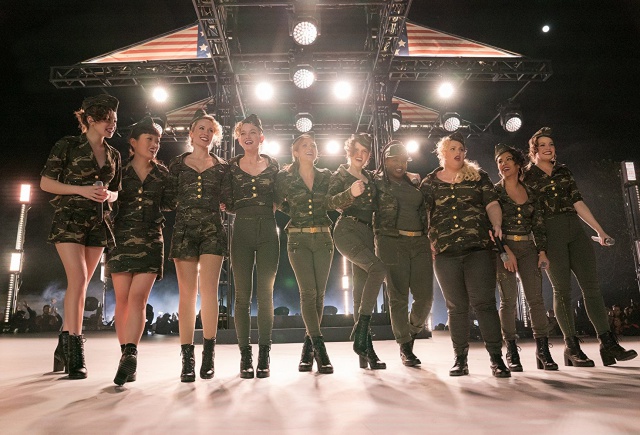 The Pitch Perfect franchise is a series I really want to love. I think the first film is witty and engaging, with great music and a fun story that still holds up in the five years since it’s been released. However, the second, and now third installments have turned into meandering messes with few jokes that land and a cast that, while talented, doesn’t really get to do much.

Pitch Perfect 3 takes place three years after the original Bellas have all graduated. Becca quits her job as a music producer because of her “artistic integrity,” and the rest of the group is living a familiar post-college, disappointing job path that all movies like this have. When Hailee Steinfeld’s Emily invites the older members of the group for a show, the older Bellas decide they want to get together and perform on the USO tour so that they have one final chance to sing together. Once they arrive at the tour, it’s revealed that DJ Khaled will be looking for an opening act, so it’s the Bellas vs. other, much better groups for the spot. DJ Khaled is one of the best parts of this film, and all he’s doing is being DJ Khaled and getting that Beats money.

All in all, the plot is just very standard—there are no surprises, and the cast, while really good at nailing what are supposed to be jokes, is hindered by the fact that overall, the movie just isn’t funny. That’s a shame, because this is the first time series writer Kay Cannon has a co-writer, Mark White, and this is without a doubt the least funny of all the films.

Thankfully, the film has managed to scale back most of the racist jokes, but still manages to make a handful of “in my country” Fez-like jokes at the expense of the sole Latina character, Flo.

The only character who truly shines in this movie is Fat Amy. Rebel Wilson is a great physical comedian, and her B-plot is easily the most interesting part of the movie. That’s sad because it’s a completely different film than the rest of the story and just comes off as Wilson’s audition tape for Spy 2, which she should totally be in if that is happening.

As I was watching the film, what I found really interesting is how painfully straight it is. There’s only one canonically lesbian character: Cynthia-Rose Adams, played by Ester Dean. In the first movie, it was implied that she had an ex-girlfriend who was another one of the Bellas, and she had a heavy, almost predatory, thirst for Stacie. In the sequels, she’s pretty much just a background, sexless character.

Yet, the fandom has a huge queer fanbase around the characters of Chloe (Brittany Snow) and Becca (Anna Kendrick) because of their very intense interactions with each other in the first two films. Plus, the second movie has Becca making a lot of kinda-bi comments about other women, so it’s definitely a possibility. Of course, Chloe ends up crushing on some generic Channing Tatum-looking dude. But don’t worry, they still manage to throw in a queerbaiting scene for the BeccaxChloe fans; they just won’t make a franchise about an all-female acapella group actually have explicitly lesbian/bi scenes in it because … reasons? It’s like Bring it On all over again.

Also, can I just say two things about Becca? First, who quits their music producer job in New York City because one client doesn’t like your mix? Girl, have you ever seen an episode of Empire? You go with the flow. You have a producing job, and you only just got out of college three years ago. But you are gonna quit with no backup? In New York City? If that isn’t some Friends logic, then I don’t know what is.

Second, while Anna Kendrick is no doubt talented and a very good singer, this franchise has been trying to convince me for three films that she’s pretty much the best out of the group, and that’s just very clearly untrue. Both Haliee Steinfeld and Ester Dean are stronger singers, and while I get Kendrick is the face of the series along with Wilson, I think that if any movie in the series needed a full ensemble story again, it was this one.

All in all, if you’re a fan of Pitch Perfect, and you really want to have a movie to see with your friends, you could go see this. You may laugh, but it’s unlikely any time Rebel Wilson isn’t on the screen.