It's not Pippi, it's Crimson Justice?

When you think of Milla Jovovich, one of the most badass women in action and genre cinema, you don’t think freckles, crazy wayward pigtails and  a monkey bestie, right? Not likely, and maybe we should keep it that way?

This past week, Funny or Die released a parody video in which Milla, who is currently working on the next Resident Evil flick, plays an older, gun-toting version of Pippi Longstocking, the nine-year-old heroine (and “strongest girl in the world”) seen in the series of books of the same name. Basically, the idea is a brain-dead screenwriter, played by a particularly wild-eyed Clint Howard, pitches a Pippi reboot movie called Pippi Longstocking: Crimson Justice and Milla plays the title character, complete with a very adult version of Pippi’s typically adorable and oversized outfit and, yes, stockings.

At first, as you see Milla’s Pippi posing in front of a black screen, accompanied by her life-sized monkey sidekick and “love interest” Assius, it all seems like a piss take at Hollywood’s love of re-purposing any and every successful property into a darker, superhero-esque flick, especially considering some primo jokes about I, Frankenstein (“I loved I, Frankenstein!” “We all did.”). And this is all fine and great because, hey, we can pick apart the film industry’s obsession with remaking things that don’t need to be remade at the greatest of lengths. But when things really get interesting is when one of the execs that Clint’s character is presenting to gets real about the oversexualization of this new Pippi. After Clint exclaims that he plans to give this new Pippi, a.k.a. Crimson Justice, “a costume with a little keyhole cleavage,” this exec responds immediately with what should be the obvious follow-up question: “You want to put cleavage on a child?” 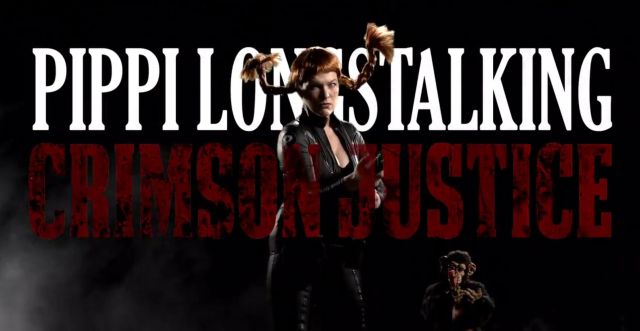 Now, in Clint’s version of Pippi, she’s supposed to be an adult (he says she’s a 24-year-old woman), but the fact is, by making her an adult, and one who’s wearing a skintight costume at that, this guy is turning a child into an overtly sexual object. And that is never cool. That’s why it’s almost so satisfying when we see his pitch fail miserably, the only remaining artwork landing in huge garbage bin. And that’s also why the final moment, in which Ed Begley Jr. steals the artwork and makes his own movie with him playing Assisus, is more bittersweet than hilarious. I mean, OF COURSE execs would be more into this idea coming from an established name in the industry, even if it’s totally sexist and unoriginal and pandering to the original readers and lovers of this character. Because sex sells and all that overplayed jazz.

Point is, as much as it’s great to see Milla, a woman who clearly rocks the genre heroine thing, play one of our childhood faves in the name of seemingly good fun, the truth is, this kind of project could totally happen and that’s totally depressing. So let’s just go back to watching Milla rock more age-appropriate characters and re-reading the original Pippi books by Astrid Lindgren (or if it’s more your bag, watching the ’80s movie, or the animated TV series from the ’90s because those were both awesome in their own ways).