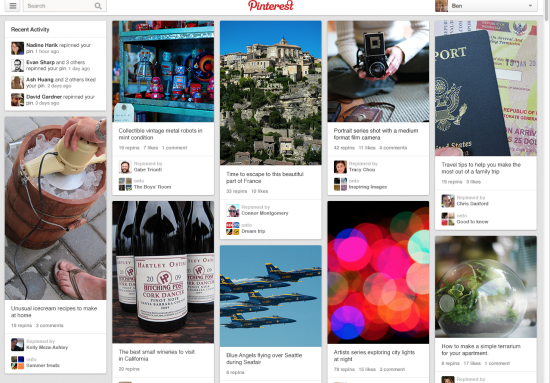 Pinterest is all about pinning things to other things, so with their newly launched redesign, they wanted to make it easier for users to find more pins to pin. The redesign was tested out on a handful of users in a closed beta, and will now begin rolling out to users via invite as early as today. So what can you expect from the new Pinterest? Pins. So. Many. Pins.

The redesign is mainly centered around helping users discover more things to pin to their boards, because presumably when Pinterest starts making money it will do so by people pinning pins to things. To make that discovery process easier and more intuitive, Pinterest’s new design now shows you pins from the same board when you’re looking at one pin up close. This lets users explore the entirety of a board without having to be constantly going back to the board from individual pins.

When you’re looking at a pin from a website, Pinterest will now also show you more pins from that site. So when you pin this story to your “Greatest Overuse Of The Word ‘Pin'” board, people looking at that pin will also see other pins from Geekosystem. Arguably, that helps websites more than it helps individual users, but we’re a website, so we rather like this feature. It could also help Pinterest cash in on all the pinning of pins in the future.

To help boost the sense of community on Pinterest, they’ve also added a “People Who Pinned This Pin” view, which is exactly what it sounds like. Looking at a pin will now show you other users who have pinned the same pin, so you know who you can be best friends forever with on Pinterest — or “Pin Pals”.

Pinterest says in the blog post announcing the changes that they don’t want users to have to learn anything new to use the redesign — something Facebook could learn from. Instead of a full redesign, Pinterest aimed for a suite of “subtle, but useful changes.” The site also took notes from users saying they lose their place pretty easily when using the site, so now the “Back” button in your browser takes you back to where you started, regardless of how deep down the Pinterest rabbit hole were.

On the back end, Pinterest says they’ve also rebuilt the foundation of the site, which should make it more stable and reliable for users as well as easier for them to make upgrades in the future.

Invites are rolling out starting today, so let us know if you get one and what you think of the new look. Pinterest is also interested in hearing what users think of the new design and ways they can improve it. Again, Facebook, take notes on that one.