If you love time-travel, swordplay, and female-led projects, you will love Pike and Trident! Created and produced by writer Patty Jean Robinson (who also plays Trudy Trident) and co-director Kim Turney (Myrtle Pike) and co-directed by fight choreographer Jan Bryant, Pike and Trident is the story of two women who annoy the living bejeezus out of each other who are forced to travel through time together to retrieve lost artifacts. It’s basically Warehouse 13 meets Rizzoli and Isles meets Doctor Who, but with swordplay. Check out their first episode, “A Viking We Will Go!”, above!

Here’s the official description of the show from the creators:

Pike and Trident is a comedic adventure set in the year of 3535. They’re two curators from the museum of Now and Then, who get on each others nerves. Disagreements are solved with battle. Traveling is done by ‘Hopping.’ Cars have become an ancient relic. Pike and Trident screw up an exhibit while arguing, losing valuable artifacts, and they must recover them throughout history by hopping to the past to prevent an epic historical disaster – that is – if they can learn to get along.

Sadly, there has only been one episode for a long while due to various family and personal concerns that popped up for the creators over the past year, but now the ladies are back, and they want to continue the Pike and Trident journey – this time, with a special guest appearance from Josephine Bonaparte!

I had the chance to speak with Robinson in an exclusive interview with TMS to talk about her hopes for continuing the series, her love of stage combat, and what makes these time-traveling ladies so special!

Teresa Jusino (TMS): Tell me about the origin of Pike and Trident. What made you decide to create the show, and how did the idea for the story develop?

Patty Jean Robinson: Kim and I were inspired by many a friend who were creating web shows. We knew we could do it, too – we’ve had tons of production experience in front and behind the camera, we’ve chartered the webseries seas before, it’s time!!

The idea started while we were IMing with each other watching TV, and it kept blossoming while we were in Fight Class (Academy of Theatrical Combat). We kept thinking of silly things to fight over, and one thing lead into another, museum curators on a mission to collect artifacts. It would allow for different weapons and time periods and for all of the fun. The more we thought about the world we were creating, the more we were cracking ourselves up.

TMS: Tell me about Trident. What’s she like, and what makes her fun to play?

Robinson: Trident is fun to play, because she’s quite fierce and very sassy, and quite the flirt. I think I want to be her when I grow up. I get to live vicariously through her actions, she’s very mischievous and curious. Also, she loves movies and tv from the 80s and 90s, just like I do. Funny about that. And when she’s angry, she can let it all out and hit things. I’d like to do that… 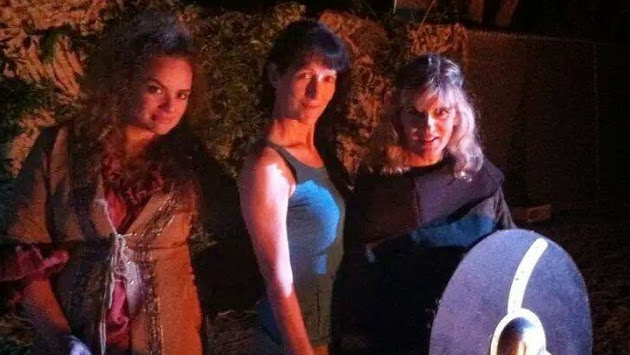 Robinson: As someone who has never been very coordinated or athletic, I always wanted to be someone who was that, stage combat scared the crap out of me (I never went beyond the first class at UCLA), and about 6 years ago, I wanted to conquer that fear. Also, I wanted to play with swords! Being able to accomplish a fight on any scale is exhilarating!! It’s that feeling of accomplishment and the excitement that comes with performing – when you combine those two feelings it’s quite the rush. Best drug ever.

I found the Academy of Theatrical Combat through Kim – she used to be my boss at an old job where we taught filmmaking and video game design to kids after school. She told me how she taught at The Academy with Jan Bryant and Dan Speaker. All three of them were fun to learn from. They have a very supportive environment for those of us who feel uncoordinated. I like them so much, they’ve become part of my family, and they’re kind of stuck with me now.

TMS: Episode Two features Josephine Bonaparte. What other historical figures can we expect as the show goes on?

Robinson: We made sure to find interesting people from history that maybe aren’t well-known Historical Celebrities like Washington or Cleopatra. So be sure to look out for Dr. John Snow, (a man who figured out the source of Cholera), Grace O’Malley, ( a pirate who met Queen Elizabeth I!), and Martianus the gladiator.

TMS: Why should people watch and support Pike and Trident? What makes this show special?

Robinson: There are a couple factors here. This show is designed to be fun, just darn fun. Time-traveling, action, comedy, historical figures, and it’s all family friendly. It’s a chance to combine sci-fi, comedy, and action. It might be a genre combination that’s attempted often, but usually it doesn’t turn out as well as you’d like.

Also, we’re not your typical Hollywood action duo. Kim and I are both over 30, I am not the usually body type Hollywood would place as a lead, and well, we’re making this on our own. Our director and fight choreographer, Jan Bryant has worked in Hollywood for years as a sword-master. We’re not your typical combination of actors, directors, and writers. I think that makes us unique, and it lends to making something magical.

We have alot of heart, and alot of determination. Our eye is on the prize, and that prize is to make a fun show. There’s so much I want to show everyone, I really like what we’ve created! The only way to get it all made is to get funding. It might take longer than we want it to, but we’re gonna do it nonetheless. Onwards and Sideways!

If you’d like to find out more about Pike and Trident, or support the making of Episode Two, check out their IndieGoGo campaign which ends tomorrow!