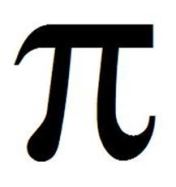 Shigeru Kondo and Alexander J. Yee, a Japanese systems engineer and an American computer science student, respectively, claim to have calculated the value of pi to five trillion digits.

If their work stands up, they will have shattered the pi calculation record set earlier this year by Fabrice Bellard, who calculated the value of pi to 2.7 trillion digits.

As Yee describes it, the “why” of the project was as much about testing the limits of hardware as it was about math:

Shigeru Kondo and I wanted to see how much better we could do if we used some more powerful hardware. Both of us are hardware fanatics. And both of us (especially Shigeru Kondo) had some very powerful machines at our disposal. So with that, we decided to see how far we could push the limits of personal computing using personally owned hardware.

Unlike Fabrice Bellard’s record which focused on efficiency and getting the most out of a small amount of hardware. Our computation focused more on getting the most performance and scalability from a LOT of hardware. How much hardware can we cram into one machine and still make it faster?

The main challenge for a computation of such a size, is that both software and hardware are pushed beyond their limits. For such a long computation and with so much hardware, failure is not just a probability. It is a given. There are simply too many components that can fail. So the questions become:

*How much can the hardware be expanded while maintaining an acceptable level of reliability?

*Is it possible to build enough fault-tolerance into the software to cover for hardware failure?

Very neat stuff; more on their methodology here, with wonkier details here. The five trillionth digit is a “2,” by the way.